In the end, the personal and the political were not to be disentangled. The Minnesota Senate Monday voted 37-30 to extend marriage rights to gays and lesbians.

A mere six months ago, Minnesota was in line to become the 31st state to enact a constitutional amendment restricting marriage to opposite-sex couples.

When Gov. Mark Dayton signs the bill, scheduled to take place at 5 p.m. this afternoon on the Capitol’s front steps, it will become the 12th state to legalize same-sex marriage.

The outcome of Monday’s Senate deliberation was expected, but the four hours of testimony that preceded the vote was both longer than anticipated and startling in its intensity.

On the other side of the Senate’s ornate, two-story wooden doors, a crowd of thousands roared in response. In the galleries high above the floor, advocates on both sides prayed, held hands and tried not to look too uncomfortable about being forced into close physical confines.

Sen. Barb Goodwin read a letter from a closeted teenage lesbian who wanted the Columbia Heights DFLer to know what a yes vote would mean for her future.

Andover’s Branden Petersen, the lone Republican to vote in favor of the bill, said he wanted to be able to one day tell his two very young children to “be bold and be courageous” and live the courage of their convictions.

Minneapolis DFLer Jeff Hayden said that as he left the house that morning, his daughter reminded him to vote yes. He is African-American and his wife is white, and the girl would not have been born to cheer him on if it hadn’t been for Loving v. Virginia, the landmark U.S. Supreme Court decision striking down anti-miscegenation laws.

Majority Leader Tom Bakk, of Virginia, talked about the gay pastor who saw his family through innumerable tragedies and weddings but who himself was locked out of marriage.

Alexandria Republican Bill Ingebritson said he fears for his family, and despairs what he will tell his granddaughter when she comes home from school “confused.”

Dayton’s signature will make Minnesota the third state this month, Delaware and Rhode Island, to approve same-sex marriage. An effort in Illinois that seemed all but certain a few weeks ago may have stalled.

Unlike those states, however, Minnesota’s vote to legalize represents a relatively swift reversal. Almost exactly two years ago, a GOP-dominated statehouse voted to place a constitutional amendment banning gay marriage on the 2012 ballot.

The throngs of angry voters who packed the Capitol halls that night might have signaled to lawmakers that rather than turning out a lukewarm Republican base it was energizing youth, minorities and progressives who were disenchanted with President Barack Obama.

It seemed like a safe gambit for other reasons, too. Same-sex marriage issues had failed in 30 states in part because gay-rights advocates consistently failed to find a way to combat shrill, fear-based campaigns.

Talking about marriage as a right did little to move the needle, the researchers found. But when people began talking about its personal meaning to them, they would often change their mind mid-conversation and conclude everyone deserved something so meaningful. 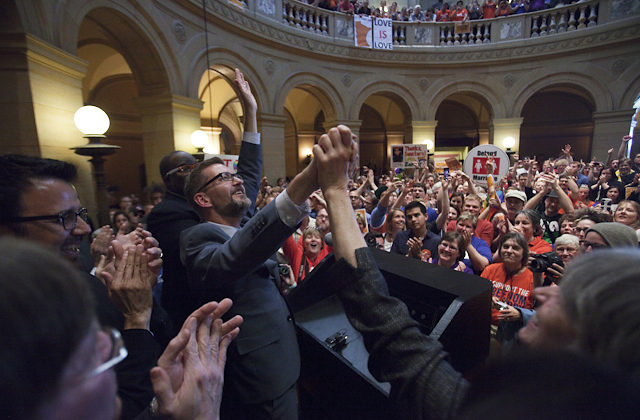 MinnPost photo by Terry GydesenBill sponsors Sen. Scott Dibble and Rep. Karen Clark high-five each other in the Capitol Rotunda following the passage of the bill in the Minnesota Senate.

Hours after the May 2011 vote that created the ballot question, a coalition of Minnesota LGBT groups established a formal campaign. With 18 months to implement it, Minnesotans United orchestrated a novel strategy: To stage —  via churches, house parties, social media and phone banking — conversations like those that had enabled people talked to by the researchers to reconsider their positions.

In the process, the campaign amassed a wealth of detail about the demographics, attitudes and social networks in each of Minnesota’s legislative districts. “Allies,” straight supporters of LGBT rights, carried much of the weight.

At the same time, same-sex marriage was gaining support in places likely and unprecedented. Saying that his views had “evolved” in part thanks to his daughters, Obama endorsed marriage rights a year ago.

Meanwhile, a Who’s Who of Minnesota officials threw their support behind Minnesotans United, including then-Cottage Grove Republican Rep. John Kriesel, a decorated veteran, and Dayton.

Most significant, approval among so-called “millennials,” people born after 1980, soared between 2003 and 2013. A March survey by the Pew Research Center found that fully 70 percent support same-sex marriage, as compared to 51 percent a decade ago. A Washington Post-ABC News poll done the same month found 58 percent of all Americans support gay marriage.

The Nov. 6 election was a nail-biter nonetheless, with the ballot question defeated 52-47 in the wee hours of the next day. The new Minnesota DFL Capitol majority elected at the same time began warning of “overreach” immediately.

After taking a few weeks to crunch its data and consider the electoral map it had assembled, Minnesotans United’s leadership sat back for several weeks before announcing it was reorganizing as a lobbying campaign for 2013.

The challenges this time were different. DFLers in Greater Minnesota were unnerved by the fact that most of their districts had voted in favor of the amendment, while Republicans whose districts rejected it needed reassurance there would be no reprisals.

A team of lobbyists was engaged, and the conversational strategy revised. GOPers, particularly those in western suburbs who voted against the amendment, might be swayed by information that — particularly among the young — party fealty and support for same-sex marriage no longer went hand-in-glove.

And rural DFLers got time. Time to deliver property-tax relief and other long-sought “tangibles.” And time in which to listen to their conflicted constituents, who were thought to be less likely to bristle if everyone felt heard.

In the end, in both the House of Representatives last Thursday and the Senate Monday, a remarkable lineup of lawmakers whose support had been tepid told stories of learning someone they were close to was gay and of being persuaded by the impact marriage — or its absence — had on their life.

Although its outcome was much more uncertain, last week’s House vote was in some ways less dramatic than the Senate’s. Many representatives read prepared statements, and while several said they made their decisions while listening on the floor, choreography seemed evident.

Never mind that Minnesota law has long defined marriage as “a civil contract,” an amendment introduced by Rep. David FitzSimmons, R-Albertville, inserted the word “civil” into the bill.

The move was credited with making it possible for Republican Reps. Jenifer Loon of Eden Prairie, Andrea Kieffer of Woodbury and Pat Garofalo of Farmington to tender “yes” votes. The measure passed 75-59 in the House.

After Monday’s Senate vote, authors Sen. Scott Dibble and Rep. Karen Clark and other leaders of the effort addressed weepy, enthralled supporters who seemed reluctant to leave the Capitol.

The speakers’ messages were predictable, if moving and clearly heartfelt. The crowd’s, however, had to be gratifying for the vote-wranglers and their more at-risk colleagues.