Minnesota has joined nine other states in cracking down on an online, fast-cash loan company that claimed to operate under Native American tribal law thereby circumventing state limits on lenders.

CashCall, Inc. of California used Western Sky Financial LLC – which claims to operate under tribal law of the Cheyenne River Sioux in South Dakota – as a front and illegally charged Minnesota borrowers annualized rates of up to 342 percent, according to a lawsuit filed today by Minnesota Attorney General Lori Swanson and Commerce Commissioner Mike Rothman.

The borrowers were falsely told that the loans were governed by tribal law, according to a complaint filed in Hennepin County District Court.

MinnPost reported in June that lenders claiming to operate under tribal law were advertising in Minnesota and generating complaints to authorities. Borrowers who bit on these ads were finding themselves in murky legal waters and disputes over the reach of tribal sovereignty.

In the Minnesota lawsuit, authorities allege that loans were held out to consumers as being made by Western Sky Financial, LLC. In reality, they allege, CashCall or its subsidiaries were funding the loans – immediately purchasing them before the borrower had made a single payment. And CashCall collected the interest and payments.

Western Sky and its affiliates have not responded to MinnPost’s repeated requests for comment. On its website, Western Sky has emphasized that it “is a Native American business operating within the exterior boundaries of the Cheyenne River Sioux Reservation, a sovereign nation located within the United States of America.” 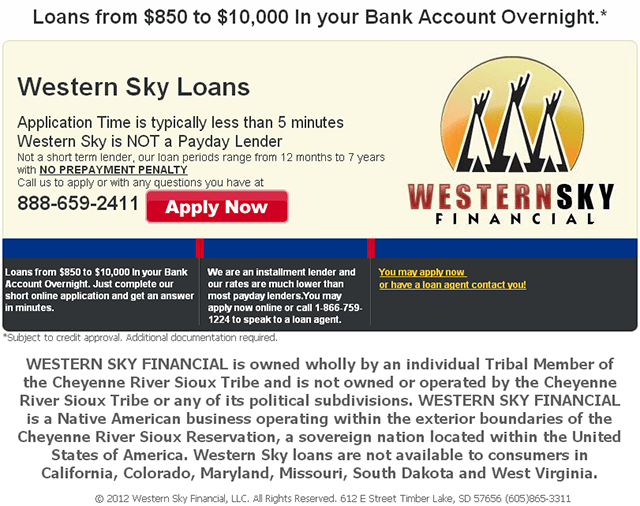 A screen shot of the Western Sky Financial website.

“CashCall uses Western Sky as a facade to fraudulently give the loans the appearance to consumers that they are subject to tribal law, not state law, and therefore not subject to state interest rate caps and other consumer protections,” said a statement issued by Swanson’s office.

“Western Sky and CashCall falsely claim that the loans are not subject to state lending laws (including state interest rate caps) because Western Sky’s owner, Martin Webb, is a member of the South Dakota Cheyenne River Tribe,” the statement said.

According to the complaint, Western Sky ads offering easy money have lured Minnesotans to borrow between $850 and $10,000 with annualized percentage rates of between 89 and 342 percent. Consumers also have paid origination fees of up to $500 at the front end of the loan, which are financed and subject to the same interest rates.

“In other words, a Minnesota resident who wants to receive $1,000 must finance $1,500 — with $500 immediately going for fees — and then must repay the full $1,500 at an interest rate of 149 percent,” said the statement announcing the lawsuit. In contrast, it said, a properly licensed lender making a similar loan would only be allowed to charge a $25 fee, with a 21.75% APR.

“This outfit has a history of hiding behind front companies to circumvent the legal protections — including limits on interest rates — available to borrowers under state law,” Swanson said.  “The Internet is flooded with unlicensed lenders, and people need to be on guard.”

CashCall also has advertised under its own name in Minnesota. And it has been caught in the past trying to dodge lending laws by using so-called “rent-a-bank” schemes, the lawsuit alleges.

Other states and federal regulators

In April, Oregon’s Department of Consumer and Business Services issued a cease-and-desist order against Western Sky and fined the company $17,500 “for making loans in Oregon without a proper license and for charging interest rates in violation of Oregon law.” The department’s statement said that Western Sky had “promoted its loans through an aggressive TV and radio advertising campaign in many states, including Oregon,” and had charged annualized interest rates ranging between 89 percent and 342 percent.

Colorado’s Attorney General sued Western Sky and its owner, Martin A. Webb, in state District Court in 2011 alleging that the unlicensed lender had illegally granted some 200 loans in Colorado.

A Colorado District Court judge was not persuaded by Western Sky’s argument that Indian-owned businesses operating on a reservation are not subject to state rules. In a summary judgment finalized this May, he sided with the state, noting that borrowers applied for their loans and received them in Colorado, not the South Dakota reservation. And they repaid the loans and the finance charges from Colorado, typically by Western Sky withdrawing funds electronically from their local bank accounts.

The Colorado court also didn’t buy Western Sky’s requirement that the borrowers submit to the jurisdiction of the Cheyenne River Sioux Tribal Court.

Meanwhile, the Federal Trade Commission has charged in U.S. District Court in South Dakota that Western Sky and affiliated loan companies “sought to unfairly and deceptively manipulate the legal system and force debt-burdened consumers throughout the country to travel to South Dakota and appear before a tribal court that did not have jurisdiction over their cases.” The FTC said that Webb also does business under several different names, including Payday Financial LLC, Lakota Cash and Great Sky Finance.

The FTC alleges that Western Sky and its affiliates have attempted to settle claims in tribal court and even obtained court orders to garnish their wages.

“The tribal court does not have jurisdiction over claims against people who do not belong to the Cheyenne River Sioux Tribe and who do not reside on the reservation or elsewhere in South Dakota,” the FTC said in summarizing its case.

In 2010, the Better Business Bureau warned cash-strapped families to beware of online lenders claiming they were not beholden to state or federal laws. After receiving hundreds of complaints, the BBB said that lenders, when confronted, typically claimed legal immunity —  “often claiming that they are based in another country or on Native American reservations and are sovereign nations.”

The BBB also said that the West Virginia Attorney General had “evidence to prove the lenders who claimed tribal sovereignty were not actually part of the tribe but were merely ‘renting’ it for the purposes of claiming shelter from state and federal laws.”

Some tribal lending businesses are legitimate, as are the tribes’ sovereign rights to operate them on their own terms. And some tribes around the country see the online loan business as the new casino, a fresh chance for those operating on remote reservations to profit.

In the case of CashCall and Western Sky, though, Minnesota authorities say they draw the line.

“Minnesota is not open for illegal and sham lending businesses that prey on our consumers,” said Commerce Commissioner Rothman, whose Department licenses and regulates lenders making loans in Minnesota. “The Commerce Department is committed to stopping lending schemes that rip off Minnesota consumers with exorbitant interest rates.”

Their lawsuit seeks to stop the lending operation as well as to get restitution for Minnesota consumers.

The same Minnesota authorities have successfully cracked down on other online lenders who were operating illegally in Minnesota and charging rates far in excess of caps set in state law.

On May 31, Ramsey County District Judge Margaret Marrinan ordered Delaware-based Integrity Advance LLC to pay $7 million in damages to the state as well as $705,308 in restitution to Minnesota borrowers. The company also was barred from collecting interest and fees on loans granted to Minnesotans unless it becomes properly licensed in the state.

The case was the eighth recent court victory Swanson’s office has scored against online lenders.