Many visitors to Historic Fort Snelling aren’t aware that there is a large group of military buildings just across the highway that stretches southward to the airport. While the old fort represents the early period of military occupation of this area, the newer “Upper Post,” dating from 1878, has a rich history of its own.

Larry Peterson, who works for the Department of Natural Resources, and John Anfinson with the National Park Service are among many who have been working, waiting and hoping for years to see the old buildings of the Upper Post rehabilitated and put to good use. A new charter school called Upper Mississippi Academy will open its doors in temporary quarters this fall, and its recent approval to occupy some of the historic buildings in the future is a major  breakthrough in the preservation and reuse dream.

(Full disclosure: I will be a teacher at this new school. The academy will be starting with sixth and ninth graders in temporary classrooms for the first year, but will eventually occupy nine of the 28 historically significant buildings that have been unused for decades. The school will ultimately expand to include pre-K through grade 12.)

Although there are several government agencies and departments with interests at the site, the DNR is the landlord. Peterson, manager of Fort Snelling State Park for the past dozen years, is the point person for the preservation and reuse effort.  He’s been charged with taking care of the buildings and doing what he can to keep them structurally sound until tenants are found and reuse plans are made.  This has meant finding money and other resources for such things as boarding windows, putting on new roofs, tuckpointing brick exteriors and other repairs.

Peterson is not just the caretaker of this place, it’s clear that he really cares about the place as well. “It gets under your skin,” he says. “It’s an odd, unique, extremely significant historic area that, when you hang around for a while, you just start caring about this place.”

Anfinson shares Peterson’s passion for historic preservation of the Upper Post.  He has also been involved with the Fort Snelling area for a long time, formerly as cultural resource program manager and in his current position as chief of resource management for the Mississippi National River and Recreation Area. 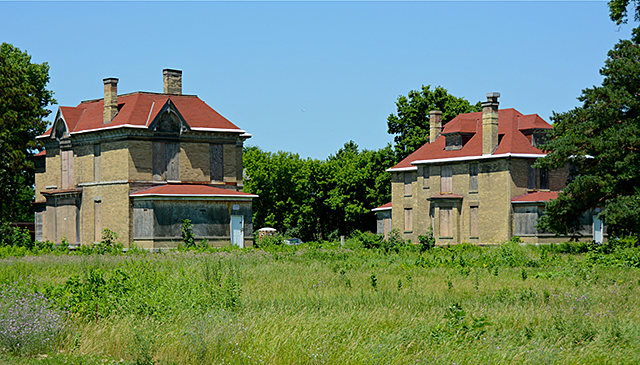 Anfinson is also a historian and has written several books about the Mississippi River. In today’s video, the first of two reports, he gives us a short lesson about the historic significance of Fort Snelling’s Upper Post.

In Tuesday’s report, Peterson and Anfinson explain how several agencies and governmental departments are working together to find ways to preserve and reuse the historic military buildings of the Upper Post.