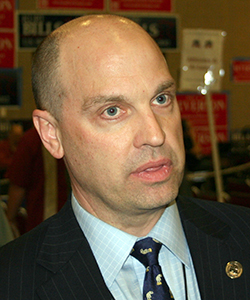 The Republican Party has become a “hunt for heretics,” a game for people playing, “I’m the most conservative,” a breeder of “craziest sound bites.”

When Shortridge took on the chairmanship of the Minnesota Republican Party in January, 2012, his main task was whittling down the party’s $2 million debt.  But he also expressed hope that the party could rebuild through the strength of its ideas and principles. When he left in March of this year, the debt was pared but Republicans had lost a governorship and control of the Legislature. Republicans were branded as the party of no: no gay marriage, no expansion of voting rights, no unions, no taxes and, most harmfully, no new ideas.

He sat down with MinnPost and gave some blunt advice to conservatives and Republicans. Here are excerpts from that interview:

MinnPost: What did you learn about Republicans from your experience as party chair?

Pat Shortridge: I think my main takeaway [is that] Republicans have to get to being solutions oriented, focused on solving problems that people face. Not with more government, not with higher taxes, not with more control in St. Paul and Washington, D.C., but in actually talking about how market-based ideas, based on empowering individuals, how they actually work.

If we don’t get back to being a solutions-oriented party that is addressing the day-to-date concerns of most Minnesotans and most Americans, we’re not going to be successful.

MP: What caused the Republican Party to drift into negative focused campaigns?

P.S.: I think it’s easier to just say no. It takes less work. Look, Ronald Reagan was a successful president not because everyone agreed with him but because he could go out and convince the country to beat Washington, D.C. He went out there and said: “Look.  Here’s what I campaigned on, here’s what I ran on, here’s what I’m trying to do it, and yet these guys are standing in my way.” And he did that repeatedly. And he did it with great success and more times than not got his way from Congress, especially in passing his economic plan, passing his budget, passing a tax plan, passing the defense build up that ultimately led to the demise of the Soviet Union. He went out and did the hard work of persuading.

It’s much easier, I’ve noticed, for people on our side to just say no. Or to just say I’m against this or “I’m going to pretend like I’m the most conservative. I want to set up a game.” You see this going on right now in Washington with this whole defund-it thing with Obamacare. It’s a game of a bunch people playing, “I’m the most conservative.” It’s not a serious effort to actually stop Obamacare. If you really wanted to stop Obama care right now on a national basis, you’d be out trying to find six or eight Democratic votes in the Senate so you could actually put a bill on Barack Obama’s desk and actually make this more than an academic exercise.

MP: Is this a problem caused by the influence of the Tea Party?

P.S.: I don’t think it’s necessarily the Tea Party movement. The Tea Party movement is a collection of people who’d not been involved in politics, people who really were fed up with both parties, who really didn’t see much difference, who got fed up and frustrated at some of the stuff that happened. The stimulus and Obamacare in 2009, you know, really energized and motivated them. The Tea Party, I’d say they’re more engaged activated citizens. They’re not trying to become a political party. They’re an important part of the conservative coalition or the Republican coalition. The Tea Party, like other parts of the Republican coalition, they’re looking for leaders  And, look, if they’re not given a better alternative, they’re going to pick the man or the woman who’s most effective, the most eloquent at saying no.

MP: How do you counter what’s happening, for example, to incumbent Republicans like Lindsey Graham, Mitch McConnell and Lamar Alexander—senators who have worked for consensus and who are facing primary challenges from activists who don’t think they’re conservative enough?

P.S.: These things aren’t hereditary titles, nobody’s entitled to them. People certainly have an opportunity, and frankly a right and a duty, to run if they think they’re being governed poorly, if they think their senator, their congressman, their governor, their president is not doing a good job.

I will say, I think the Republican Party, in some respects, and the conservative movement, have taken a very self-destructive approach, where as I describe it, it’s the hunt for heretics. It’s almost this game of—if somebody is against us on one issue, we’ve get to kick them out of the party, kick them out of the movement.

It’s Pat Toomey on the gun issue. It’s Marco Rubio on immigration. It’s, depending on your perspective, Rand Paul on national security stuff. You can go down the line. It’s like, look, everybody’s gonna have a wart or blemish from your perspective, but, look, these things are coalitions. Political parties are coalitions.  There is no uniformity. We’re not like Europe. We have big coalitions that unify the great big parties, and you can’t all of a sudden start weeding people who are good conservatives out the movement because all of a sudden you think they might be bad on one issue. It is this self-destructive personality attack. And, again, it’s the, “I’m-more-conservative-that-you-are” game. It’s incredibly self-defeating for a political movement if you’re trying to accomplish something.

MP: Is there room for a moderate Republican in today’s party?

P.S.: To win elections and to govern. You’ve got to get the votes to pass things.

MP: What frustrated you most during your chairmanship of the party?

P.S.: Lots of things. Sometimes it’s the refusal to see the bigger picture and, again, it’s the notion of coalitions. In 2008 we had a coalition of conservatives  who were so,  quote unquote, principled that they couldn’t bring themselves to vote for Norm Coleman and they gave us Al Franken by a couple of hundred votes.

In 2010 we had moderates that were so principled that they could not vote for Tom Emmer and they gave us Mark Dayton and basically this whole last legislative session.

It goes beyond even just being able to work with people but questioning their integrity and willingness to work in good faith. People couldn’t just come to different conclusion.  They had to be somehow morally inferior or, quote, they sold out. It’s going to kill us if everyone’s is so damn sanctimonious that they’re purer than Caesar’s wife and the rest are all just a bunch of people down in the muck.

And I think that’s a very unattractive quality for a political movement, especially one that’s trying to attract new people. Because, you know what, the new people you attract surely are not going to agree with you on 100 out of 100 things. And if they watch how you treat your own—it’s like, wait a minute, that guy agrees with them 95 percent of the time and you treat him like dirt. I agree with them 80 percent of the time, why in God’s name would I want to join that?

You have to be willing to build coalitions to save this country or you’re going to fail. I appreciate people’s passion, I appreciate their intensity, but they have to understand that this isn’t a game. This is about getting some really serious work done. And you have to willing to do it.

You have to be effective. Effective conservatives, that’s my mantra. I want effective conservatives. I do not want people who are the loudest or who can throw out the craziest sound bite or who are on talk radio or Fox News the most. I want people who can actually get things done. And I think many of my brethren on the right—here and around the country—are becoming sort of similarly acclimated. They look around and go, “I don’t recognize this anymore.”  We better get our act together before it’s too late.