In a world where most people carry a camera on their phone, some police officers want to take video of their own.

Police departments have used squad car cameras for years, but new technology allows them to wear cameras so small they can be attached to their collar or even a pair of sunglasses. These so-called “body cams” are being used in a handful of cities in Minnesota and around the country, and they are quickly gaining popularity in police departments. Minneapolis is one of several major metropolitan police departments looking into the cameras, and uniformed officers with the Duluth Police Department will soon be wearing cameras.

Minneapolis Police Chief Janeé Harteau is drafting a policy to implement police body cameras, spokeswoman Cyndi Barrington said, but there’s no timeline to complete that process. Minneapolis City Council members set aside $400,000 for the cameras in December, with expectations that outfitting officers could cost around $650,000 when the program is fully implemented. For some, that’s a small price to pay in a city where millions of dollars were paid out in police settlements last year. (The City of Minneapolis alone has paid out more than $9 million in settlements and judgments in police-related lawsuits since 2009.)

But the technology isn’t perfect. Wexler and his group are two months away from releasing policy recommendations for police departments across the country using body cameras or interested in doing so. In cities where body cameras are already out on the street, questions have arisen regarding data privacy and storage of the video. Still, cops give the cameras high marks in cities that have implemented programs so far.

“In many ways, this came about because of a groundswell of support from police officers themselves,” Wexler said. “It became kind of a grassroots movement.”

There’s only been one long-term study done on effectiveness of police body cameras, but the results were striking. In Rialto, Calif., between February 2012 and July 2013, the Rialto police had an 88 percent decline in filed complaints after just half of its uniformed officers started wearing body cameras. The officers also used force 60 percent less often, according to the study.

The theory behind the cameras is cops will behave better if they know they are being watched, but police say the cameras change citizen behavior just as often. In Fort Worth, Texas, where the police department launched a voluntary program in 2012, police leaders say they have seen minimal change in the way officers act on the streets.

“We have had several complaints that were unfounded or never made official due to the review of the video,” Forth Worth police spokesman Daniel Segura said. “Citizens decided not to pursue allegations when they were shown the video or told that it existed.” The Forth Worth Police Department recently spent about $679,000 for 195 additional cameras and video storage over the next five years.

Experiences are similar in two Minnesota cities — Burnsville and the Iron Range town of Gilbert — which were some of the first departments to start wearing body cameras. 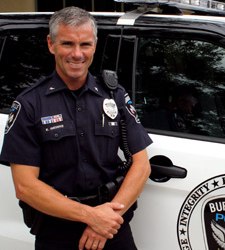 Burnsville police started using body cameras in June 2010 after an officer brought the idea to his superiors, police Chief Eric Gieseke said. Most police business happens far away from squad cars, he said, rendering car-mounted cameras useless. Forcing police to stand in front of their squad cars to capture video on stops is dangerous, too, as the cars are sometimes hit by other vehicles.

“It’s the wave of the future in one way, shape or form,” Gieseke said. “If we aren’t recording ourselves, someone else is.”

Since then, the department has gone from five officers equipped with body cameras to 30. Gieseke said it’s difficult to measure how successful the program is, as it’s voluntary, but it has helped exonerate officers in several cases over the last few years. “It allows us to review the complaint in a different way,” Gieseke said. “It enhances the public trust too.”

Overwhelmingly, the cameras help prove the officer’s innocence, Gilbert Police Chief Ty Techar said, but in one case the cameras were used to discipline an officer for excessive use of force.

“Without the camera, I don’t know if the discipline would have been what it was,” Techar said. “It really made it clear that the officer went beyond what was necessary.”

The cameras do come with drawbacks. Early models of the cameras didn’t have a long battery life, especially in Minnesota’s cold-weather climate, and questions still linger over how much an officer should be recording on any given day, Techar said. A small department like the force in Gilbert has also had issues storing the data. Even with just seven uniformed officers wearing cameras, the Gilbert Police Department only has the capacity to store video for about one month, unless it’s part of an ongoing investigation.

And what happens when people start requesting to see the videos? “By data-practices standards anyone can request it, but when you are in someone’s house and they are having a private medical issue, there are questions and concerns with that,” Techar said. “We are not in the business of embarrassing people, and a lot of stuff we catch on video is embarrassing.”

No one has requested the videos yet, but the Gilbert Police Department is contracting with an outside group to draft a policy to help them regulate use of their cameras. Wexler and his group are grappling with similar issues as they draft their policy recommendations for the U.S Department of Justice.

“It’s not just a report, now you have a visual image,” Wexler said. “Sometimes you are seeing people at their worst, and there’s a visual image of that, and maybe citizens don’t want that to be public. There has to be an agreement from both sides what the rules of engagement are.”

In some states, data privacy laws would require the officer to inform citizens that they are being recorded. In most cases, citizens can simply spot the camera on the officer. That has changed the way citizens interact with police and sometimes has kept them from giving useful information to help solve crimes, Wexler said.

“It would be analogous to every time you met anyone in life, if you went into a store or a restaurant and you were being recorded. Our lives would be transformed in some way,” Wexler said. “You can’t just give everyone a camera and say, ‘Now go out there.’ It’s changes how police relate to citizens.”

Police departments in Minnesota focus in on body cameras