With Friday’s news of a projected $1.2 billion budget surplus, it wasn’t surprising that both DFLers and Republicans were quick to take credit.

But it was a little surprising to see what seem to be chilly differences between DFL House leaders and their Senate counterparts on what should happen next.

Republicans, of course, said it was their policies from the Pawlenty years that have resulted in the Minnesota economy’s continuing improvement — a surplus increase since the November forecast of $403 million.

‘Give it back’ plan

And they have a bumper-sticker plan for what to do with the money: “Give it back.”

At their news event, they even had a “Give it back” poster, designed for $20, as a catchy television visual for GOP legislative leaders to stand next to while making their case.

DFLers, meanwhile, were crediting their policies from last session for helping the economy chug along nicely.

Actually, DFLers are pretty much in agreement on the give-back idea, although they’ll quibble over the amount.

Gov. Mark Dayton, in fact, predicted there will be “a tax bidding — everybody will be trying to top everybody else.”

Already, the House tax committee has passed a bill that would repeal most of the business-to-business taxes that were created last session. Additionally, the committee has come up with other tax breaks for the middle class.

Total givebacks in the House proposal would amount to $514 million.

House Speaker Paul Thissen made it clear that the bill will move through the process quickly with hopes of having it to Gov. Mark Dayton by March 14. Such fast action would allow Minnesota income-tax filers to reap the benefits of the changes this tax season.

Most of the savings for individuals would come from the state conforming to federal tax rule changes.

Dayton, too, is pushing for the dollars to be returned to taxpayers. 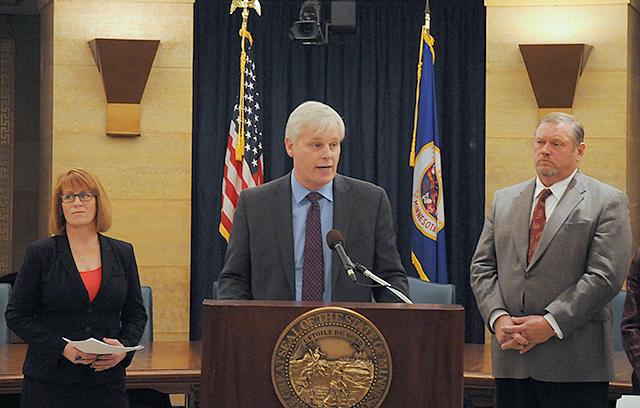 MinnPost photo by James Nord
House Speaker Paul Thissen made it clear that the bill will move through the process quickly with hopes of having it to Gov. Mark Dayton by March 14.

“We have proven there is a positive role for government to play in our state’s economic progress,” Dayton said in a statement. “Now we have the responsibility and the opportunity to extend our contribution. … The individual and business tax cuts would be a good place to start.”

But here’s where the chill comes in.

Bakk approach: Not so fast

Senate Majority Leader Tom Bakk doesn’t appear to be in such a rush.

He did say that the new forecast makes repeal of the business-to-business taxes more likely, but he also said it seemed unlikely that the Senate would move as rapidly as the House.

Dayton, however, wants the Senate to move quickly on the tax cuts.

That wasn’t the only difference between Thissen and Bakk.

Thissen didn’t see a reason to “stuff [surplus funds] into a cushion,” meaning he didn’t think it was necessary to add large amounts to the state’s rainy-day fund.

Bakk, on the other hand, is much more interested in bolstering the state’s reserve fund.

There appeared to be almost a chill between the two leaders, who typically show more agreement when in public.

There was even a hint of a chill over the Senate office building that Bakk wants built. That $63 million building, which was passed in last session’s omnibus tax bill, is becoming the Republicans’ daily issue with which to hammer DFLers.

Understand, the Bakk-Thissen chill wasn’t as great as the frosty give-and-take between DFLers and Republicans.

Thissen accused the Republicans of “gloom and doom” politics on this day. He said it was almost as if Republicans are hoping the state’s economy doesn’t continue to improve.

Republicans, of course, denied that they were gloom-and-doomers.

But, in the next breath, House Minority Leader Kurt Daudt talked about all that is bad with the state of the Minnesota economy. 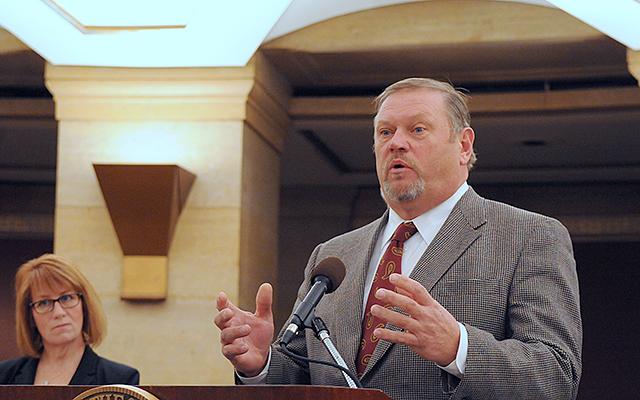 His arguments: 49 percent of the people in the state are “under-employed.” Minnesota families are hurting. Minnesota businesses are overtaxed. Etc.

Dayton brushed off the GOP criticism of DFL “job-killing”policies.

“Same old rat-a-tat,” said the governor, who is still recovering from back surgery and held a telephone news conference with reporters.

Daudt’s gloom doesn’t line up with what officials of the state’s office of Management and Budget were saying.

Commissioner James Schowalter, for example, said that “these are the best set of numbers since the late 1990s.”

There was positive momentum in the final weeks of 2013, she said. (Most economists seem to believe that awful weather throughout much of the economy has stalled some of that momentum — but they also believe that situation is temporary.)

Additionally, she said, business and consumer confidence has increased since Congress stopped taking the country near a fiscal cliff in debates over the debt ceiling.

So what lies ahead? 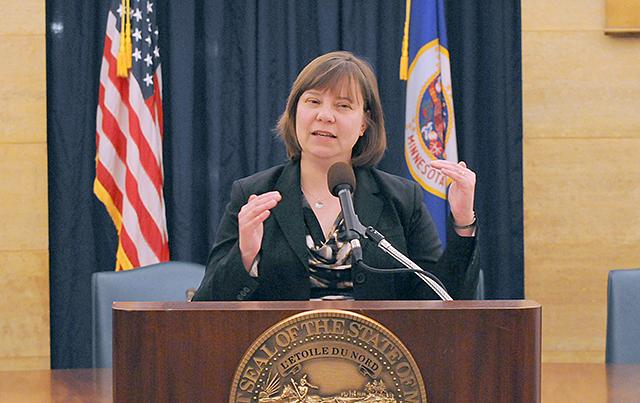 The governor and legislative leaders of all stripes seem to agree that Friday’s good news won’t lead to re-opening last year’s budget and going on a spending spree.

The surplus, though, will add impetus to a large bonding bill, perhaps supplemented with some direct cash payments for some projects.

And, because it’s an election year, there will be even more finger-pointing and self-congratulatory back-patting than normal.