The question isn’t whether a minimum wage increase will be passed by the Minnesota Legislature this session. That will happen.

The question is how many asterisks and exceptions will be hanging from the final law.

And the biggest question of all is how much of the $9.50  hourly minimum, as supported by the House, will survive a conference committee process that’s being carried over from the end of last session.

Despite massive organizing efforts supporting a relatively clean House bill, there are still significant issues to resolve for the Senate and House members of the conference committee:

• Should the minimum wage be tied to an automatic inflation trigger?

• Should agricultural workers be paid overtime after 40 hours?

• What constitutes a small business in Minnesota? (Small businesses would be allowed to pay employees less than the proposed $9.50 minimum.)

• Should tips for restaurant servers figure into the wage formula?

• What will be the phase-in time?

The answers to those questions will all be bargaining chips in establishing how big an increase there will be in the minimum from the current $6.15 state/7.25 federal standard.  If, for example, proponents of the House bill can win a cost-of-living trigger, they’d likely accept some reduction in the $9.50 goal.

Meantime, Republican legislators and business leaders are resigned to the fact that an increase is coming. Their hope is to keep the size of the increase as low as possible and keep as many exceptions in the bill as they can possibly write.

With a straight face, Republican leaders and Chamber leaders say they support an increase to the $7.25, the current federal level. But, of course, that’s not really supporting anything. Most minimum-wage workers in the state already are paid at that level and not the $6.15 official state rate.

(Any business involved in interstate commerce must pay the higher level. That means virtually any business that accepts so much as a credit card is playing by federal rules.)

On the surface, GOP legislators seem to be almost ho-humming the minimum-wage debate.

“It’s not a high priority in my district,” said Rep. Matt Dean, R-Dellwood. “Not something you hear when you’re door-knocking.’’

But that conversation changes, Dean and others say, when they are talking to those who run businesses, especially small businesses. The minimum wage is a maximum priority among many business people.

The Star Tribune’s recent Minnesota Poll may indicate why so many Republican legislators don’t show a lot of outward passion on the wage matter. The poll shows 80 percent support for an increase, although just 42 percent support the $9.50 level.

But there are nuanced ways to attack the issue. GOP legislators, with support from their business base, will be looking for victories at the edges of the issue.

The inflation index will be a major point of conflict.

Under the House version of the bill, there’s an inflation trigger that’s capped at 2.5 percent.

Prior to that ballot initiative, the federal minimum wage rate was $5.15, as were the rates in Washington and Minnesota.

The small increases in all but two years in Washington have added up to real dollars. Meantime, in Minnesota, there hasn’t been an increase in the minimum in eight years, which means that the inflation trigger is a big issue on both sides of the minimum-wage divide.

Again, compare what that means in Washington and Minnesota. While Minnesota’s minimum-wage earners have received no increase, Washington’s minimum-wage workers have seen their pay increased over the same eight-year span from $7.63 to $9.32 because of the consumer-index trigger.

Doug Sams, owner of D-Brian’s restaurants, seemed nearly as concerned about the impact of the inflation impact as he did about a $9.50 minimum.

According to Sams, having a stable minimum has given employers more flexibility in paying their best workers significantly over the minimum, it’s allowed them to hire more employees, including more teenage employees.

Sams, representing the Minnesota Restaurant Association as well as his own establishments, knows an increase in the minimum is coming.

But he says legislators need to be aware of the consequences. In his industry, he said, those range from fewer employees to higher prices — and the likelihood of customers using computer tablets, rather than servers, to order their meals.

The Restaurant Association, which has the support of the state’s Chamber of Commerce,  hopes to mitigate the coming minimum wage increase with what appears to be an economic cousin of the tip credit, called the “tipped employee tier.” Under that system, tipped employees who make $12 an hour or more between their base hourly pay and tips would be paid at the current $7.25 hourly rate.

Such a system would have a major impact in the metro area, where, according to the Restaurant Association, tipped employees average $22 an hour. Highly tipped employees would not benefit from an increase in the minimum wage.

But no form of tip credit appears in either the House or Senate bill, and Senate Majority Leader Tom Bakk seemed to say that the tip credit by any name is a dead issue in his mind.

Bakk seems to be moving toward House version

At a briefing with reporters last week, Bakk seemed to be showing that he’s moving in the general direction of the House version of what constitutes fairness for low-paid workers.

Recall, it was Bakk and the Senate that disappointed many in the DFL base by coming forward with a minimum wage proposal that was modest, to say the least. The Senate sought to raise the minimum to $7.75.

But Bakk acknowledges the $9.50 pressures coming from the “Raise the Wage” campaign conducted by the AFL-CIO and other organizations representing the DFL base. 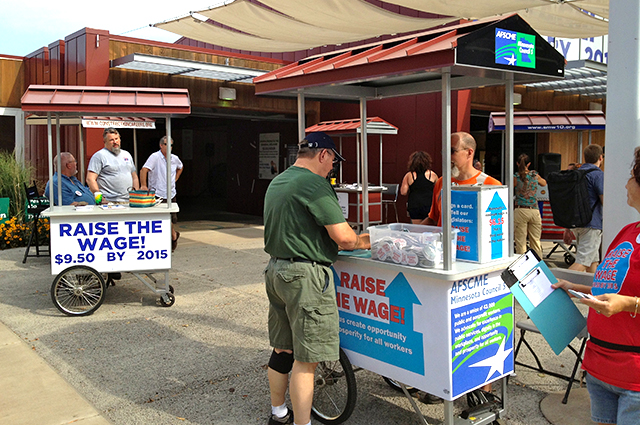 There will be big rallies at the Capitol, Bakk said. But in the end, those participating in the rallies go home. It’s the legislators who “own” the long-term impact of their votes.

“I’m concerned about what $9.50 means to small businesses on Main Street,” Bakk said. Those businesses already are under assault from big-box stores and online competition, he added.

Of course, the proposed legislation already would give cover to many small businesses, allowing them to pay employees an $8.50 minimum.

But there will be tussling over what constitute a small business.

Currently, any business in the state that has gross sales of less than $625,000 is considered “small.”  The House — and its supporters — wants that number to be reduced to $500,000 in gross sales, which would match the federal standard.

Through all of this, watch what happens at the edges.

The ag industry always has received kid-glove treatment from virtually all levels of government. In the case of wages, for example, ag employers don’t have to deal with the inconvenience of paying workers overtime pay when they put in more than 40 hours in a week.

Minnesota, unlike surrounding states, at least has some restrictions. The work week for ag employees is set at 48 hours. (In South Dakota, there’s no limit to the hours an ag worker can put in without receiving overtime benefits.)  Under the House bill, the 40-hour work week would become standard for all.

This is receiving pushback from some, though not all, in the ag industry.

At its November convention, members of the Minnesota Farmers Union had a long, heartfelt debate over the issue of wages and the 48-hour week. In the end, delegates to the convention came down in support of accepting the 40 hour week.

“In the end, we modified our position,” said Thom Petersen, the Union’s director of government relations. “In the end, I think the position came down to supporting social justice for workers.”

The Farmers Union does run left of most of the ag organizations, which still will fight for the 48-hour week and other changes to the minimum-wage effort.  Still, the Farmers Union vote does give legislators from rural areas of the state a little more wiggle room than in the past.

But again, it’s one of the side issues that could bog down the entire effort.

Letting the side issues overtake the main issue is a concern of Rep. Ryan Winkler, DFL-Golden Valley, who has led the charge for the $9.50 minimum. He’d like the matter to move quickly through conference and to the floors of the two chambers.

“The danger is the Legislature getting tied up in other stuff,” he said. “We want this to move quickly.”