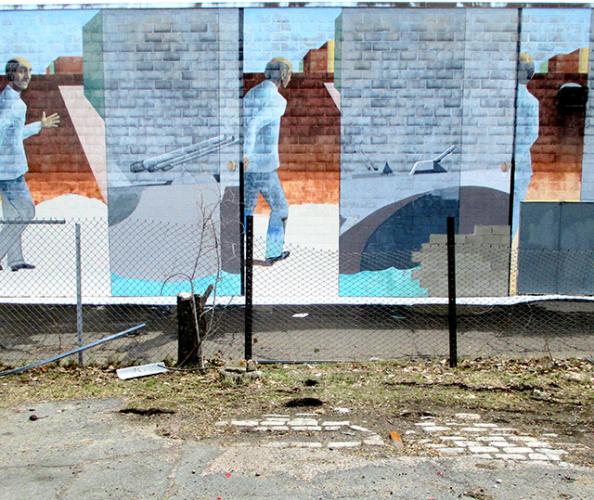 MinnPost photo by Iric Nathanson
36 years after it was built, city planners have drafted a new development blueprint that could lead to the removal of the wall blocking Nicollet Avenue at 29th Street.

Peter Feider was not at all impressed with the new addition to his neighborhood.

“Downtown has its Nicollet Mall. Now, we have the Nicollet Wall,” Feider remarked in 1977, soon after the massive wall was built at 29th Street, just beyond his Town Crier Pancake House.

The concrete obstruction, more than 20 feet tall, cut off direct access to Feider’s restaurant from the south, causing a sharp drop in his business.

The wall was built to close off a key stretch of Nicollet Avenue, two and half miles south of its much-heralded downtown transit mall. Local development officials maintained that the street closing was needed in order to entice Kmart to move into what was then a distressed swath of South Minneapolis. With Nicollet blocked between 29th and Lake, the national discount chain opened its sprawling big box store in 1978. Kmart’s Lake Street site spanned what had been a major north-south thoroughfare.

Now, 36 years later, city planners have drafted a new development blueprint that could lead to the reopening of Nicollet Avenue and the removal of the wall at 29th Street.

The origins of the street closing, now considered a City Hall mistake, extend back to the early 1970s when work began on what came to be known as the Nicollet Lake Development District. This planning effort was launched at a time when federal urban development policy was undergoing a major transformation. Earlier, in the 1950s and ’60s, Minneapolis had received a massive injection of federal urban renewal funds, totaling more than $16 million, to clear and redevelop a blighted section of downtown known as Gateway. But the federal program had lost favor in Washington and federal funds were drying up even as rebuilding was underway in the downtown district.

With the imminent demise of federal urban renewal, city officials knew they needed a find a local source of public funds in order to move ahead with their ambitious efforts to eliminate urban blight in Minneapolis. They found that source by harnessing the city’s property taxing authority and using it as a redevelopment tool. Through a system of tax increment financing, the city identified certain redevelopment target areas known as development districts. Within these districts, the city was able to generate the capital it needed to acquire and clear blighted sites by issuing city-backed bonds. As development occurred, the increased or incremental property taxes generated within the district were earmarked to pay off the city bonds.

The city’s first tax increment project, District #1, encompassed a collection of blighted blocks, extending over to Loring Park, at the south end of the Nicollet Mall. The next project, District #2, created in 1972, covered an eight-block area at Lake and Nicollet.

City officials had ambitious plans for the Nicollet-Lake district. Some said it had the potential to become a mini-Southdale, with a large shopping center surrounded by apartments, offices, restaurants and a movie theater.

The concept of tax increment was based on the assumption that new, private real-estate investment would occur within the development districts once the blighted structures were demolished. But at Nicollet-Lake, the city began acquiring sites and clearing them without any firm assurances that development would, in fact, take place. As bulldozers moved through the district in 1974, the city granted redevelopment rights to a local real-estate group, Nicollet Lake Associates. But the Nicollet Lake group was unable to deliver on its investment promises.

By the fall of 1976, a large section of the Nicollet-Lake district had already been cleared, but only a minimal amount of rebuilding had occurred there. That year, the city had to start making payments on the tax increment bonds but lacked the tax increment revenues needed to cover those costs. A shortfall of $371,000 meant that the city had to dip into its general revenue funds to make the Nicollet-Lake bond payments. As a result, all city taxpayers, not just those within the development district, had to share in covering the annual bond payment costs. With development lagging in the Loring Park district, bond payments for both districts were expected to cost city taxpayers about $1.8 million in 1978.

By now, City Council members and their agency staff were getting desperate. Unless they were able to find a developer who would build at Nicollet Lake, District #2 would become a mounting financial and political liability for the city. City Hall breathed a collective sigh of relief when Kmart signaled that it was looking at Nicollet and Lake as a possible site for a new store. But Kmart’s sign off on a Lake Street store came with one major condition: Nicollet Avenue needed to be closed if the national chain was going to build there.

When area business owners and residents learned about the condition, opposition to the street closing began to build in the nearby neighborhoods. Activists quickly formed a protest group, Keep Nicollet Open (KNO), and began agitating to block the closing. “No one is objecting to the Kmart,” declared Curt Brown, a KNO supporter who owned a Texaco station at 25th and Nicollet. “But we think Kmart could be built without closing Nicollet. Brown and other business owners urged the city to consider a plan, which would have placed the main Kmart store on one side of Nicollet and its auto service center on the other side of the street, but the company rejected that proposal.

The Minneapolis Tribune, the voice of informed downtown opinion, urged the City Council to accede to Kmart’s demands. “Kmart could be the last chance, at least for the foreseeable future, for an anchor for Nicollet Lake,” the Tribune editorialized. “Even if there were other interested stores, there is no assurance that they wouldn’t want to close off Nicollet, too. We think the possible benefits of the Nicollet Lake project far outweigh the disadvantages. Kmart should be welcomed and encouraged to be part of the project.”

The Tribune’s sister publication, the Minneapolis Star, was more ambivalent about the Kmart development and the street closing. “We share concerns of nearby residents and merchants that Nicollet Avenue traffic once diverted on to Blaisdell or 1st Avenue might never make it back to Nicollet, “ the paper declared. But the paper later acknowledged that there was “no practical choice” but to go along with the closing.

In the end, despite the best efforts of KNO, the City Council voted 10-2 in May of 1976 to approve the Kmart project and authorize the street closing. Later, after the massive one-story chain store was built, the Star’s outspoken Barbara Flanagan was quick to express her disapproval. “There is a new candidate for annual Shambles Award,” she announced in early 1978. “This year the biggest shambles is the new Kmart that blocks Nicollet Avenue. One look and you can’t resist saying ‘what a shambles.’”

In 1978, Kmart did make a modest effort to mollify its critics by contributing $3,000 for a mural on the wall at the back of its building. The mural, installed later that year, showed a figure opening a series of doors that revealed a battleship in the background. More than 35 years later the mural is still there, facing the rubble-strewn termination of Nicollet Avenue at 29th Street.

Waiting for the fall

Earlier this month, a City Council committee approved a new Nicollet-Lake redevelopment plan that reaffirms city support for reopening Nicollet Avenue. The plan also calls for direct access to Interstate 35W from Lake Street, and the creation of a small park along Nicollet at Midtown Greenway. While the 2014 plan provides a development blueprint, it does not include city funding for a future redevelopment at the Kmart site. Most likely, any future development will require a strong city partnership with a for-profit developer.

If a new development partnership does come together at Nicollet and Lake, local business owners and residents will be standing by, ready to applaud when the Nicollet Wall finally comes down.

The history of the ‘Nicollet Wall’ and a hamstrung City Hall