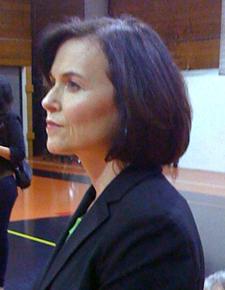 Minneapolis Mayor Betsy Hodges focused on economic equity during her first State of the City address at the American Indian Center.

“While we are one great city, we are not a great city for everyone,” said Hodges citing a Metropolitan Council study that equal opportunity in her city and St. Paul would lift 274,000 people out of poverty, add 124,000 jobs, and increase personal income by $31.8 billion.

Hodges explained that she measures every issue she and her staff studied by asking three questions. Each initiative must make the city run well, move the city ahead on equality and make growth possible.

She renewed her call to increase the city population by almost 30 percent adding 107,000 new residents to the current population of 390,000, even though forecasters say it will likely fall tens of thousand short of that.

Hodges also singled out agencies and personnel for praise.

“Our Police Department, with Janee Harteau at the helm, continues its strong work,” said Hodges, noting that violent crime is currently at the lowest level in the last three decades.

“To enhance that work, residents need to see police officers who reflect them and their communities,” said Hodges, adding that this year the Police Department is slated to hire nearly 100 new officers.

She did not mention the Southwest Light Rail Line, which the city is currently studying. Minneapolis officials have so far withheld municipal consent over co-location of light and freight rail, and a disputed Chain of Lakes tunneling system.

The State of the City address is the mayor’s major policy statement for the year ahead.

“It certainly sent out a blueprint for our staff to be working on and our staff to be taking action on,” Council Member John Quincy said following the speech. “The Mayor’s role is to set the tone, set the message and direct our staff to work on those issues.”

The next major address by the Mayor is scheduled for August when she will present the proposed 2015 budget.