The Metropolitan Council, over Minneapolis objections, endorsed the Southwest Light Rail Transit proposal 14-2 Wednesday. That moves the project to the next step: seeking consent from municipalities along the line — including the city that objects vociferously.

Still, one of the two Met Council opponents says his agency and the city could cut a deal.

The plan keeps freight trains in the Kenilworth Corridor between Cedar Lake and Lake of the Isles, and adds the light rail line to the corridor in shallow tunnels.  The Minneapolis City Council and Mayor Betsy Hodges rejected both co-location and the shallow tunnels.

The Metropolitan Council must now get approval from Minneapolis, Hennepin County, St. Louis Park, Hopkins, Minnetonka and Eden Prairie.  Each of those governments must hold public hearings on the plan and then vote.

The communities along the route, and Hennepin County, have until June 29 to accept or reject the project.

“Clearly, we’re not going to go forward with a project like this unless the biggest city in the region supports this project,” said Metropolitan Council Chair Susan Haigh, in a reference to Minneapolis opposition, following the vote.

State law does not include a clause that would kill the project if an affected community votes “no.”

“I cannot imagine the region moving forward with a $1.6 billion project to move 30,000 people a day into the city of Minneapolis without the support of Minneapolis,” said Haigh who added that Minneapolis officials need to have their own debate about how this plan goes forward.

She did not rule out changes to the Met-Council-approved plan. 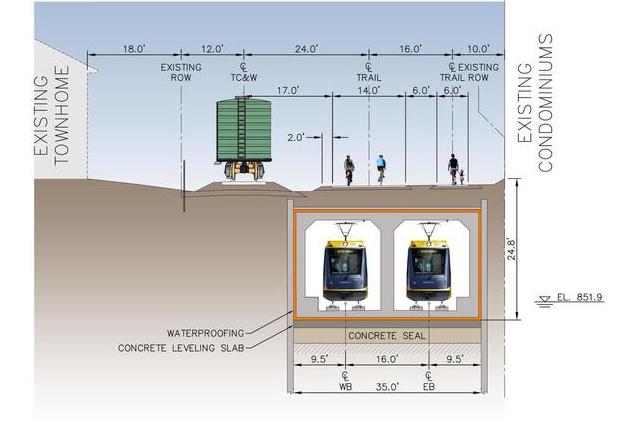 Courtesy of the Metropolitan Council
The Kenilworth Corridor plan calls for shallow tunnels, at a depth of 25 feet, to contain the light rail line.

The Kenilworth Corridor plan calls for shallow tunnels, at a depth of 25 feet, to contain the light rail line. The tunnel would be nearly a mile long.  The light-rail trains would surface and cross the channel connecting the two lakes on a bridge. The freight line would be moved 40 feet to the west of the current railroad bridge and would cross the channel on a new bridge. The plan would eliminate a station at 21st Street. 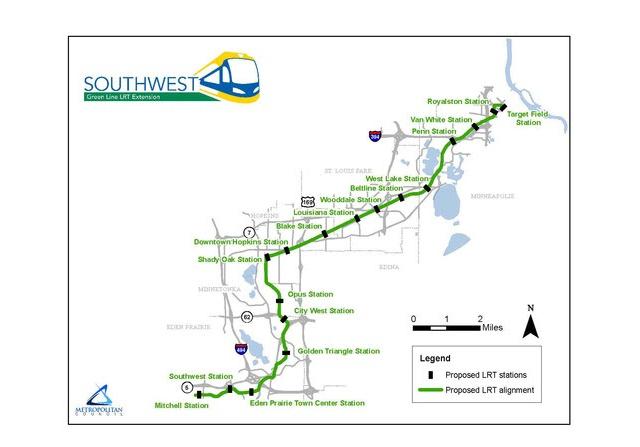 Courtesy of the Metropolitan Council
The latest map of SW LRT stations.

“The City of Minneapolis and the Metropolitan Council will negotiate an agreement about how this gets decided,” said Council Member Gary Cunningham who represents North Minneapolis and Robbinsdale.

Cunningham, who is married to Hodges, said he thinks it will be possible for Minneapolis and the Metropolitan Council to reach agreement on the line.

His two major priorities will be access and opportunities for transit-dependent riders.

“If you look at the number of who is riding the buses today, the majority are low-income people of color,” said Cunningham.  “If they stop for a week not riding the bus, this whole system would collapse. We have to make sure customers on the bus are getting great service.”

The vote came after two hours of public testimony with a representative of farmer co-ops to the west of the Twin Cities reminding Council members of their need for freight rail service.  They also heard from people living along the route, or who planned to ride the light rail line.

“I am not rich,” said Mary Paddock, who lives adjacent to the Kenilworth Corridor characterized in some news reports, especially the Star Tribune, as a neighborhood of wealthy DFL activists. The light rail line is a block from her home.

“The Southwest Light Rail project is a mess, it’s behind schedule and it’s over budget, it’s controversial and it’s put whole communities at odds with each other,” said Paddock who also took the proposed route to task for failing to serve Minneapolis riders by running 220 trains a day ‘through a serene wooded area that is home, not to people, but to fish ducks and deer.”

Said Jamie La Pray of St. Louis Park, a community strongly opposed to plans that move freight lines there, “Do not continue to [persue] a re-route of freight from the Kenilworth Corridor as a condition for getting municipal consent from Minneapolis. Fifteen years of studies have shown that there is not a reasonable re-route that will allow the residents of St. Louis Park to be as safe in the future as they are today.”

The line is scheduled to open in 2019, one year later than previously planned.  The delay has added an estimated $45 to $50 million to the price of the project.  The shallow tunnels add $160 million, and extending the line a mile west in Eden Prairie and including another station boost the cost $75 to $80 million.  The project’s current cost is estimated at $1.683 billion.