Former Minneapolis Council Member Diane Hofstede is leading a campaign against a liquor store’s construction in the northeast ward she previously represented.

The liquor store proposal is a one-story, 7,500-square-foot building with a surface parking lot at Broadway and Marshall. The site, now occupied by the renovated Grain Belt Beer Brewery and Northeast State Bank, is currently a contractors yard, and a large metal building would be torn down.

“We have 72 other liquor establishments within a three-minute drive,” said Hofstede, who sees the corner as a gateway to Northeast Minneapolis from across the nearby Broadway Avenue Bridge. “This doesn’t add more vitality to the neighborhood. It’s really more of the same.”

The Minneapolis Planning Commission approved Steve and Jason Krause’s proposal; they are advisory to the City Council, which votes on the matter Friday.

Because the liquor store will require a conditional use permit, Council Members act as a jury and cannot discuss the matter prior to Friday’s deliberations. “It’s a quasi-judicial proceeding,” said City Attorney Susan Segal explained.

The site is currently zoned for commercial mixed-use, which could accommodate retail, office or residential space. In her official notice appealing the Planning Commission approval, Hofstede contends the “suburban-style single-use development would be contrary to our city’s goal to add density.” 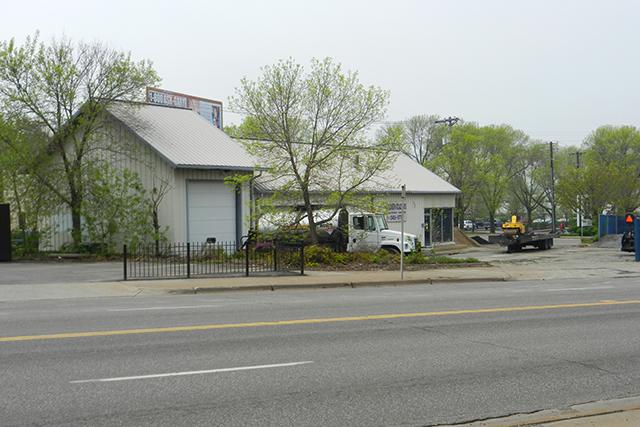 MinnPost photo by Karen Boros
The site is currently zoned for commercial mixed-use, which could accommodate retail, office or residential space.

In approving the liquor store, the Planning Commission stipulated the number of windows, nine boulevard trees, and 15 bicycle parking stalls. A City Council committee approved landscaping changes, according to the Journal newspaper.

Jason Krause, an attorney, says he plans to take early retirement and become the liquor store’s owner-operator. He says he learned the business from his father, and will become the third generation of his family to be in the retail liquor business. The family owns Minnehaha Lake Wine and Spirits.

Courtesy of DJR Architects
A rendering of the proposed liquor store.

Hofstede is concerned that the single use could also interfere with the Park Board’s long-term plan to make Marshall Avenue into a parkway.

“We have a lot of heavy trucks, very large semis, that utilize Broadway and Marshall, and we want to create an atmosphere that allows safety for pedestrians and safety for bicyclists,” Hofstede said. “A business that would be more compatible with the neighborhood would be a better direction.”

“This development is the wrong idea in the wrong place,” Wielinski wrote in a letter to the Planning Commission. “Marshall Street is slated to become the parkway that northeast was denied because it was a working riverfront.”

However, a City Council committee failed to approve a plan to redirect traffic to 11th Street Northeast, perhaps a harbinger of Friday’s decision.

Wielinski continued, “Millions are being invested to create a more vibrant front door along this river corridor. This one-story, no-pizzazz could just as well be MGM [Liquors] from the suburbs that we reject. We hope that you will as well.”

Plans for an automobile service shop just down Marshall from the proposed liquor store were derailed when the neighborhood organization said it did not meet their long-term goals for the area.

Instead, there a specialty meat and cheese production facility, among other food-related tenants, will move into a remodeled building.

Hofstede has circulated a petition, online and on paper, for those opposing the liquor store. She doesn’t have a current signature count, but says, “I think we have found five people who support the idea of a liquor store.”

Hofstede served on the then-Minneapolis Library Board before being elected to the City Council. She lost to Jacob Frey in last fall’s election, but says she has always been active in neighborhood affairs and does that work now as a private citizen.