Aerial photographs of Minneapolis from 1938 until 1983, showing every house, building and street, have sat in the City Hall clock tower for decades. Now they’re moving to the University of Minnesota — where they will eventually be viewable online.

The photos were taken from small airplanes that flew a grid pattern over the entire city about every 10 years. It was not an unusual practice for a city to have the photos taken and made available to the public.

“There was a big camera located in the bottom of the plane and the guy was clicking away as they were flying over,” said Bob McCune, Records Coordinator for the city, who has shared office space with the photos for 20 years.

“The earliest series supposedly were flown in 1922, and supposedly the Star Tribune has that,” said McCune. Also missing from the collection are the aerials of downtown Minneapolis taken in 1961, prior to the Nicollet Mall’s construction.

“We used to get a lot of requests from companies that wanted to check sites that people wanted to buy and build on to determine what had been on the property years before and find out how much clean up they were going to have to do,” McCune says.

Most of that research is now available commercially.

In 1938, Minneapolis no longer had much open space. The farms that had covered much of the city at the turn of the 20th century had all but disappeared.

“It’s really fascinating to be able to see what’s been here over time and see how the city has changed,” said Anissa Hollingshead, management analyst in the City Clerk’s office who worked photo transfer to the University. 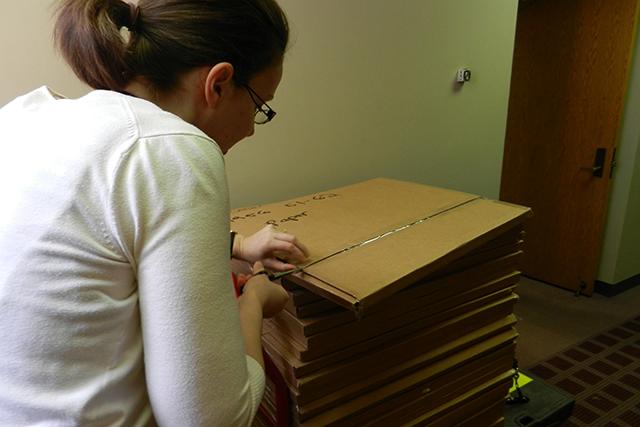 “They’re not endangered here, but there was an opportunity to make them widely available,” Hollingshead said.

The photos are being sent to the U’s Borchert Map Library, where staff has agreed to digitize them and make them available.