SARAJEVO, BOSNIA-HERZEGOVINA — This past winter my preoccupation with what we historians call the “politics of memory” brought me back to Sarajevo to see how the city would commemorate the assassination that happened there 100 years ago and sent Europe spinning calamitously into the First World War.  The story of how a Serbian peasant assassinated the Archduke and heir to the Austrian throne, Franz Ferdinand, and his wife, the Duchess Sophia, starts in the hinterlands of Bosnia in the early 20th century. 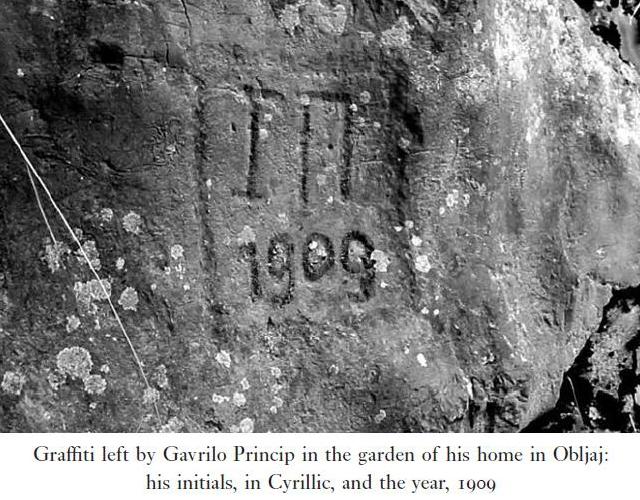 “The Trigger – Hunting the Assassin Who Brought the World to War,” by Tim Butcher. Used by permission of the author.

In 1909, a 14-year-old Serbian peasant, Gavrilo Princip, carved his initials in Cyrillic letters for “GP” on a stone outside his childhood home in Obljaj, an isolated Serbian hamlet tucked into the mountains of western Bosnia and locked into shut-in poverty. According to local legend, a friend asked Princip why he had carved his initials into the rock.  “One day people will know my name,” Princip replied.

The initials attracted no one’s attention until this past year.  British journalist Tim Butcher slogged his way to Obljaj as part of his research for his biography of Princip, “The Trigger — Hunting the Assassin Who Brought the World to War” and found the initials on the rock. The initials and a date are the only traces left of Princip’s life there. (Butcher’s “The Trigger,” I should add, is a must-read for anyone interested in Gavrilo Princip, the assassination, and its historical context.)

Posterity has not been kind to his house. Its brief life as a museum in Yugoslav times ended in a fire of suspicious origins. The armies of the past three wars — Austrians in the First World War, Germans and Croats in the Second, and Bosnian Croats and Muslims in the Bosnian War — paid their respects to the name of Gavrilo Princip by destroying the house and trashing its remains.

In the 1990s, Bosnian Croats “ethnically cleansed” the region of its Serbian inhabitants and today control the area. The Bosnian Croat authorities in the municipal center of the area, Bosansko Grahavo, show about as much enthusiasm for commemorating Princip’s birthplace as New Orleans would show towards the suggestion that it draw attention to its distinction as the birthplace of Lee Harvey Oswald. The Serbian minority claims to be raising money from abroad to re-build Princip’s home and admits the fundraising has fallen short of its goal. Most locals say a re-constructed Princip house would probably be burned down again.

The initials on the rock didn’t work. On June 28, 1914, Princip found a better way to gain attention. Assassins often have good weather for their crimes. On this sunny and mild Sunday morning, Princip stepped out from a crowd that had gathered at the corner of Franz Joseph Street and Appel Quay, just across from the Latin Bridge that crosses the Miljacka River as it cuts through the heart of Sarajevo. He fired two shots from his Browning pistol at short range. The first killed the Archduke Franz Ferdinand within a few minutes. Although Princip intended his second shot for the governor of Sarajevo, the bullet hit and fatally wounded the Duchess Sophia, who died as the motorcade sped to the hospital. 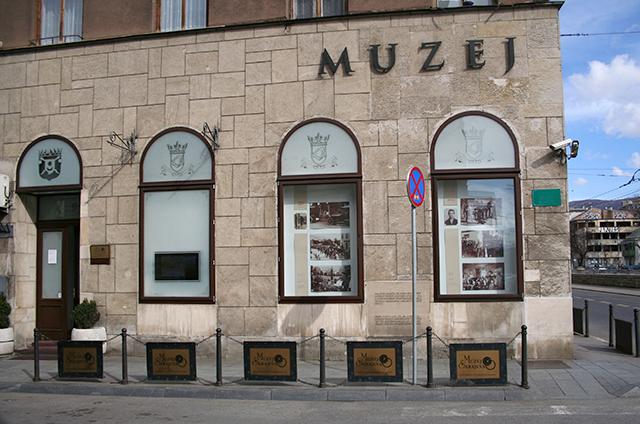 When the news reached the Austrian chief of the general staff, he sent a message with only three words to his organization:  “War. War. War.”  Princip had done for the war parties in Vienna and their allies in Berlin what 9/11 did for the neocons of the Bush administration. Within three weeks, Austria had declared war on Serbia. Serbia’s powerful ally Russia mobilized its army to invade Austria. Its ally, Germany, ordered its forces to drive east to head off a Russian attack and cross through Belgium to strike France. On Aug. 4, Britain declared war on Germany and Austria in defense of Belgium’s neutrality and France. Austria’s war of choice against Serbia drew all of Europe into its collective disaster, the Great War, 1914-1918.

But the war’s not over. Watch over the next few weeks as the commemorations for the 100th anniversary of the assassination in Sarajevo keep old animosities alive.

The ghost of the Archduke Franz Ferdinand has returned to haunt the Serbs of Sarajevo and anyone who might have a good word or two to say about Princip. This past winter Bosnian Muslims pushed for the restoration of a monument to the Archduke and Duchess that had stood in 1917 and 1918 at the end of the Latin Bridge facing the scene of their assassination. In 1916, the Vienna government had first placed a plaque on the sight and identified Princip as a “murderer.”  The following year, on the third anniversary of the assassination, the Catholic Church consecrated and dedicated a 40-foot tall monument to the couple. With the collapse of the Austro-Hungarian Empire in the fall 1918, the new monarchist Yugoslavia removed the monument. Pieces of the monument were stored in a museum until the 1960s or 1970s, when it was secretly hidden in three locations. 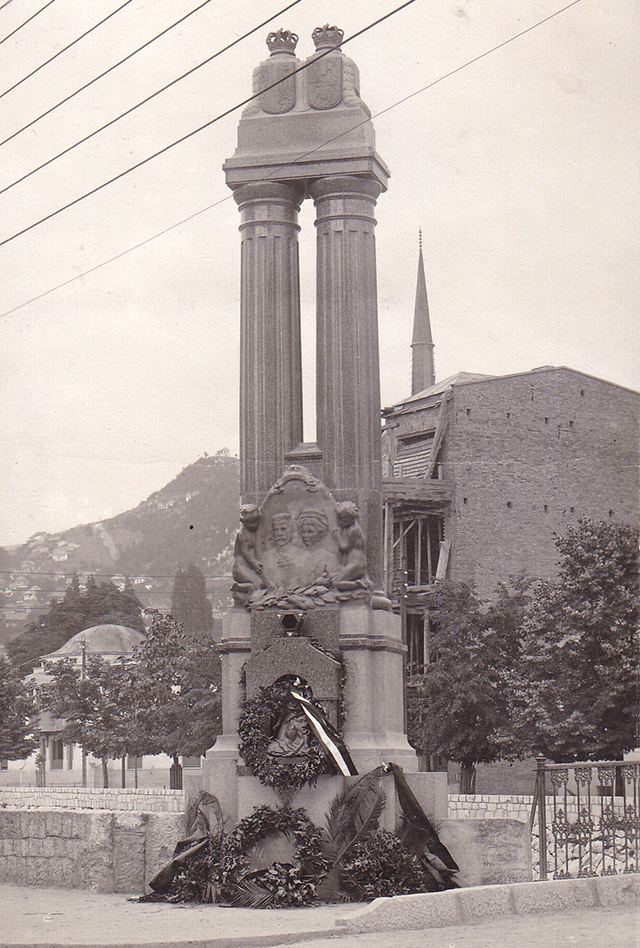 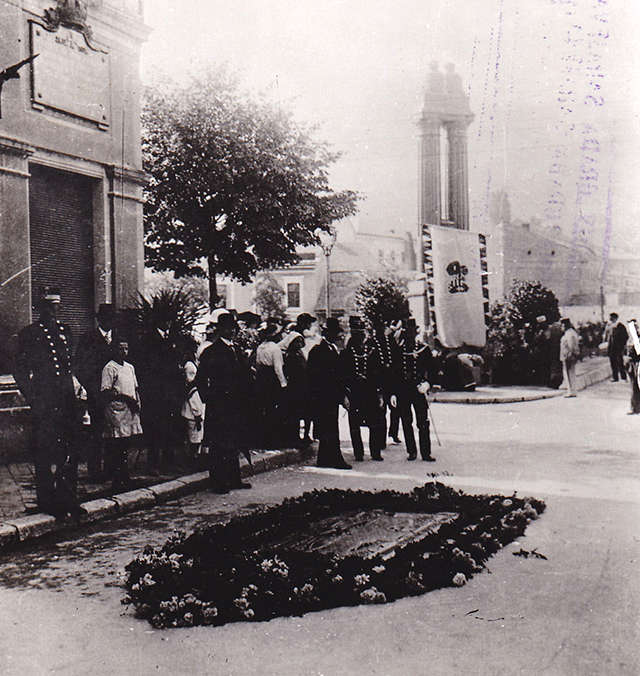 The Historical Archive of Sarajevo/Nedzad Novalic
1917 Consecrated Site of the Assassination.

By last December, the restoration of the monument was virtually complete.  Bosniak nationalists argued strongly to put the monument back in its original place in time for the June 28 celebration of the anniversary.  So far, few in Sarajevo have wanted to risk such a provocation with their Serbian neighbors.  Only the base of the monument is in place at the bridge where bouquets of flowers quietly pledge their loyalty to the Archduke and Duchess.

The Serbian side has been less discrete. Monuments, memorials and tributes to Princip, as a hero and martyr of the Serbian cause, have proliferated throughout Serbia and Serbian held-territory in Bosnia. Bosnia’s Serbian statelet, the Republika Srpska, announced last January its plans to erect a monument to Princip later this month in East Sarajevo, the Serbian sector of the city.  In Serbia proper, the capital Belgrade plans to erect a monument to Princip in the city’s historic Kalemegdan Park. The internationally renowned Serbian film director and actor, Emir Kusturica has followed suit with a public commitment for a memorial to Princip in the Bosnian city of Visegrad.  So far, according to my calculation, at least four new monuments to Princip are underway, and I am still counting.

The city government of Sarajevo has no plan for a program at the location of the assassination and has nothing more to say about Princip other than what is written on the modest plaque the city has placed at the site.  At this place, the plaque simply says, Gavrilo Princip “assassinated” the Archduke and his wife. 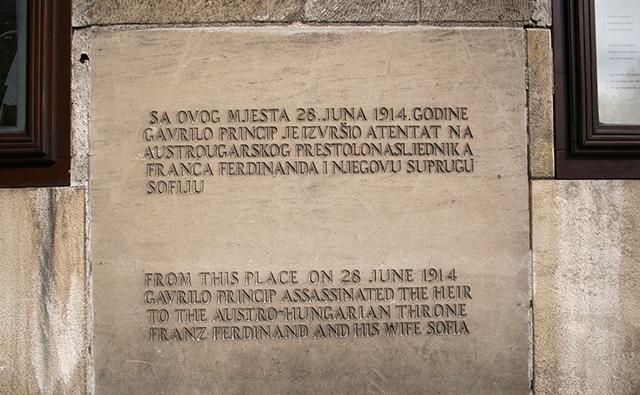 Photo by Nick Hayes
Memorial plaque at the site of the assassination today.

Sarajevo’s official remembrance of the anniversary will be subtle. On June 28, the city will host a performance by the Vienna Philharmonic in the newly renovated old town hall, which the Archduke and Duchess had visited. The orchestra will perform Haydn’s “Kaiser Quartet.” Is it merely a coincidence that a variation of this work by Haydn was the Imperial Anthem of the Austro-Hungarian Empire?

In the weeks ahead, arguments and protests in Sarajevo about the historical legacy of Gavrilo Princip will prove that William Faulkner was right. “The past is never dead. It’s not even past.”

Before his death in an Austrian prison in 1918, Princip had made a similar point in a poem he scratched into his prison cell wall.  He wrote,

Time limps along, and there is nothing new

Today is just like yesterday, tomorrow holds the same.

100 years after an assassination: Sarajevo remembers and forgets an anniversary