BRISTOL TOWNSHIP, Minnesota — Pollinating his zucchini crop by hand has been one of Jonas Hochstetler’s daily chores between roughly 7:30 and 8:30 in the morning during this month of June.

The Amish organic farmer, 54, keeps four hives of honeybees to help pollinate the dozens of types of vegetables he and his family grow then sell to stores in the Twin Cities, such as Whole Foods Market and the Seward Community Co-op.

But even those roughly 280,000 bees don’t ensure the healthy zucchini that Hochstetler needs to deliver.

“The bees would rather go to the clover or the dandelion, because they have the most nectar. Their last choice is the zucchini flower,” said Hochstetler, who with his wife, Iva, 53, and several of their 13 children, manages 137 acres. Their land sits near a flood plain a couple miles from the Iowa border and about two and a half hours southeast of Minneapolis.

That about 30 percent of Hochstetler’s and every U.S. beekeeper’s bees die each winter doesn’t help. Though this year showed some improvement, with only a 23-percent die-off, according to U.S. Department of Agriculture survey of beekeepers released last month.

“Years ago, there were more wild honeybees and bumblebees,” Hochstetler told me early Monday morning, his 16-year-old son, Christian, assembling a mechanical double-blade sickle hay mower from Germany by our feet. “Their hives were in the trees. They used to swarm when I was a boy. That’s not happening anymore. I blame that on the pesticides.”

That’s part of it, said Marla Spivak, an expert on beekeeping and social insects and professor of entomology at the University of Minnesota Twin Cities campus. Other causes include diseases, parasites and the lack of flowering plants that provide nutrition for bees, she said.

Speaking for the bees

In an effort to strengthen bee populations and the humans who tend them, Minnesota Gov. Mark Dayton and legislators enacted two laws this spring unique among the 50 states. The first prohibits labeling plants as beneficial to pollinators — such as bees, ants and bats — if those plants have been treated with and have a detectable level of pesticide that is lethal to pollinators.

The second sets up a scientific panel to investigate bee deaths and financially compensates beekeepers whose bee colonies die due to pesticides. Both go into effect on July 1.

Minnesota is the first state with those types of laws, said Scott Hendrick, program director for environment for the Denver-based National Conference of State Legislatures.

“This is a big deal. There’s nothing else of their kind,” said state Rep. Rick Hansen, DFL-South St. Paul, who sponsored both measures in the Minnesota House and accompanied me on the car ride to southeastern Minnesota. 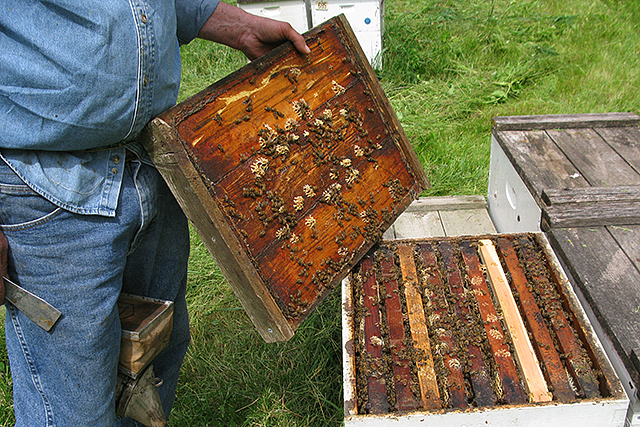 “Now, the honeybee has someone to speak for them,” said Bigalk, whose company provides bee colonies to farmers like Hochstetler who need help with pollination. His company also produces, packages and sells honey. But, Bigalk warned, the insect and the human food supply are threatened.

“The honeybee has a different environment today,” said Bigalk, standing on his warehouse’s dock Monday morning after loading a shipment of partial bee colonies headed for Wisconsin.

“One out of every three bites of food is dependent on a pollinated plant. Our food supply is in trouble,” said Bigalk, who’s been in the honeybee trade for 53 years and is a member of industry groups such as the American Beekeeping Federation. “We could possibly be on the brink of seeing food become more expensive.”

Bigalk outlined the bee pollination’s reach: from apples and blueberries, to vine crops such as melons, to seed production for legumes such as alfalfa, which farmers need to produce beef and milk.

“Hopefully, other states will see what Minnesota has done and be interested in passing legislation to help pollinators,” Bigalk said.

Spivak said that the food supply isn’t immediately threatened because “beekeepers are ensuring there are sufficient numbers of honey bee colonies to satisfy pollination contracts.” But she did say people should tread with care.

“Honey bees and some other species of bees (such as bumblebees) are at a tipping point, and if beekeepers cannot supply sufficient bees, crop yields will decrease and food prices will go up,” said Spivak. She is looking forward to using some of the $8.7 million in funding the state Legislature approved this year to build a bee and pollintor research lab. The final cost of that project is not yet known, Spivak said.

Under the new compensation law, a science team from the state Department of Agriculture, when possible, would examine a dead or dying bee colony and determine whether pesticide killed it. 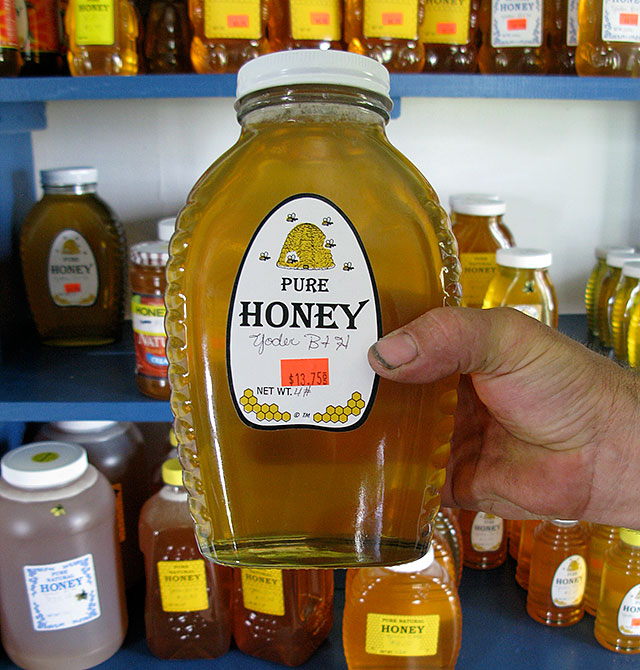 MinnPost photo by Mike Cronin
Eli Yoder, 45, an Amish beekeeper in Canton Township, Minnesota, holds up an example of one of his best-selling honey products: a 4-pound jar that goes for $13.75.

Critical link in the chain

Bees are critical to the human food supply.

“(They) are the most important pollinators of our fruits and vegetables, tree nuts, and crops like alfalfa hay that we feed to dairy cattle,” Spivak said. “Of the 100 crops that provide 90 percent of our global food supply, 71 of the crops are dependent on bee pollination. The value of bee pollination in the U.S is estimated to be between $15 and $18 billion annually.”

During the House floor debate on the compensation bill, some Republican lawmakers mocked the legislation. But Hansen told me during our car ride that the proposal is no different from laws that compensate farmers who lose livestock to wolf predation.

That law could help beekeepers such as Eli Yoder, who also is a leather and tack shop owner in Canton Township, Minnesota. The 45-year-old Amish father of six entered beekeeping in 2008 as a hobby. He now owns 150 bee colonies — a population that could reach 3.8 million within a couple weeks.

Yoder found a lot of dead bees when he checked his hives after this past winter.