Sharing and Caring Hands, which provides a variety of safety-net services to low-income children and families, expects to break ground in mid-August for a two-story addition to Mary’s Place, the organization’s transitional housing facility in the North Loop of Minneapolis.

The new addition will include eight family sized apartments, a teen center and play area for children, and will replace an antiquated building that now houses the current teen and children centers. The project will be financed in part by a $500,000 grant from the Richard M. Schulze Family Foundation.

“The current teen center … is 100 years old and it isn’t efficient, and it isn’t a place where children should have to play,” Mary Jo Copeland, founder and director of the center, as she appeared told the Community Development Committee of the Minneapolis City Council on Tuesday.

Mary’s Place, which currently has 92 family-sized apartments, would be expanded by 14,000 square feet and replace the old structure, which many consider to be an eyesore. “It’s failing in a number of ways structurally,” said architect David Engleson. “It’s very difficult to heat and cool; basically it’s a money pit.”

The addition will allow Caring and Sharing Hands to increase the number of families it is able to serve. Last year 1,334 families sought housing from the center, but only 374 families could be accommodated, according to the center’s web page. The organization is not seeking money from the City of Minneapolis for the project. 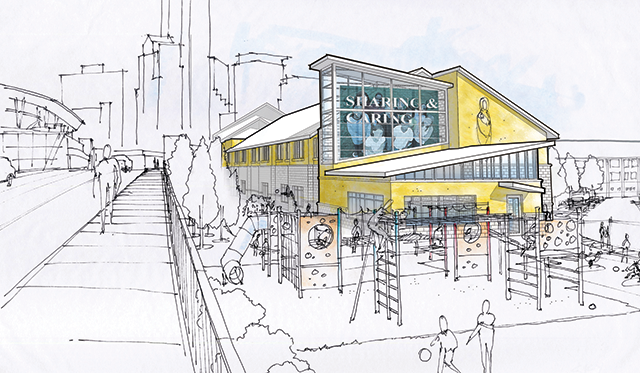 Cuningham Group Architecture
Mary’s Place, which currently has 92 family-sized apartments, would be expanded by 14,000 square feet and replace the old structure, which many consider to be an eyesore.