There were job seekers, folks who want to ride the new train and people opposed to the route for Southwest Light Rail, which runs through what is now a park-like setting that will serve relatively few Minneapolis riders.

At the first public meeting after the announcement of a deal hammered out between the City of Minneapolis and the Metropolitan Council over the route, all had something to say. Most were passionate in their remarks, even as they came less than 12 hours after the new plan for the Minneapolis segment of the 16-mile line was unveiled.

“How does the Minneapolis City Council plan in the future to retain some measure of control over what happens within our own borders and prevent the suburbs from simply commandeering the use of our land?” asked Mary Pattock, who lives near the proposed line in Minneapolis.

The bicycle and pedestrian trails currently in the Kenilworth Corridor would be restored following construction.

The plan also calls for the freight line currently in the Kenilworth Corridor to remain, but with public ownership of the land under the freight tracks. In earlier plans, the city was promised that the freight trains would be relocated.

Public ownership of the line will prevent Twin Cities and Western Railroad, currently the only user of the freight tracks, from leasing the tracks to other carriers, but it will allow the railroad to expand the number of trains it runs — and to move hazardous material through the area.

“The costs to be born by our city and our residents are high,” said Mayor Betsy Hodges prior to the public hearing. “Freight was to be removed. Against our objections it remains, so our support comes with sacrifice.”

Elimination of the tunnel north of the channel cut the cost of the project by $60 million, with half of that savings to be spent on enhancements to the five stations planned for Minneapolis and to restore any damage to the Kenilworth Corridor done during construction. That moves the cost of the project from $1.683 billion to $1.653 billion.

A group of north Minneapolis workers arrived in hard hats and safety vests to make a point in favor of the construction jobs the light rail might provide.

“I normally carry a 1935 planning map that shows a designation for north Minneapolis,” said Louis King, CEO of Summit Academy in Minneapolis, which trains workers for jobs in construction and health care. He said his 1935 map designates north Minneapolis as a slum. “Eighty years later, nothing has changed.” 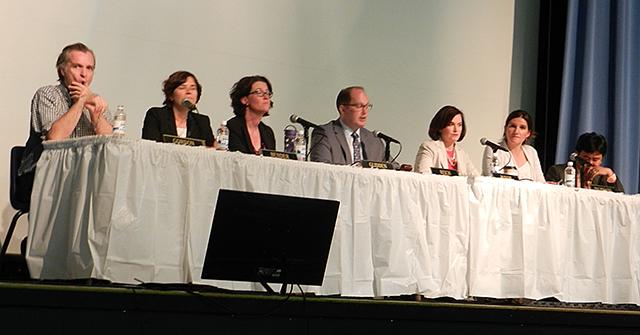 The West Lake Station, just west of the Lake Street-Excelsior split, will probably become the most used station in Minneapolis. Trains headed downtown from this station will tunnel under the busy intersection at Cedar Lake Parkway and emerge just before reaching the channel between the lakes.

In contrast, the 21st Street Station, adjacent to the Cedar Lake swimming area previously known as Hidden Beach, is expected to be used by few city riders, but will be accessible by bus for those living just south of downtown.

“We believe this package, as a whole, is a better resolution in the need to protect residents, parkland and our city waters,” said Peter Wagenius, policy director for Hodges. “The city never viewed the shallow tunnels as a gift.”

“I do not support Southwest Light Rail as it is currently proposed,” said Michael Cooney of Minneapolis, who called the project “excessively” expensive. “It is a poor solution to our transit development. It’s not routed, currently, where the population exists.”

“It appears to me, and I think you guys have been dealt a tough hand here, that we’re adopting a solution because we have to secure our federal funding,” said Cooney. “I think that leads to some of the worst decisions, an example would be the Kmart decision of some years ago.”

The new plan came following closed-door mediation sessions between the Metropolitan Council and city leaders and staff. The plan arrived just a few days short of what had been the deadline for Minneapolis leaders to vote on the question of municipal consent, which is required by state law before the project moves forward.

Five cities along the route, and Hennepin County, had until July 14 to vote on the matter. That deadline remains for all but Minneapolis, which will now face a Aug. 29 deadline for a vote. A public hearing on the matter is scheduled for Aug. 19 in Minneapolis.

Minnetonka, Hopkins and Hennepin County have already approved the plan. St. Louis Park and Eden Prairie are expected to vote by the Monday deadline.

“If the Southwest Light Rail project is not approved it will most likely be mothballed and abandoned,” said Gerald Savage of Minneapolis, who predicted the city will lose its status as a transportation hub if the project does not go forward.

“The prudent thing to do is to focus on the majority of the property owners and not just the .01 percent in Kenilworth,” said Savage.

Hodges said she will be asking City Council Members to join her in support of the new plan for Southwest Light Rail Transit.