The National Conference of State Legislatures, the bipartisan organization of state legislators and staff, has been holding its big summit at the Minneapolis Convention Center this week: four days of meetings, seminars, training and a bit of wining and dining.

And in the middle of it all is the exhibit hall, where businesses, trade groups and lobbyists can try to catch the eye of the nation’s state lawmakers.

It’s where you can stop for a plastic pen, a pin or an unusually large assortment of beer koozies  — but where you’ll also get an earful about issues ranging from the dangers of tanning booths to the need to lighten up on bans against nudity.

“Our goal is to sensitize legislators,” said Bill Schroer, executive director of the American Association for Nude Recreation. “There’s a difference between simple nudity and lewd and obscene behavior.”

“I’m not sure if they take us seriously,” he said. “They do make jokes.”

Like perhaps, why would the group give out pins that kind of require clothes? Schroer prefers plastic bracelets that say, “Go Green Go Nude.”

The Beer Institute was offering tastings in small schooner glasses, though beer snobs might be unimpressed with what was being offered: Bud Light Lime-a-Rita.

Nearby, the National Restaurant Association had a toque-wearing chef dish out samples of roast tenderloin on garlic crostini with truffled beech mushrooms from Minneapolis’s Murray’s Steakhouse. And if any state lawmakers ever dreamed of being a Mountie, the Canada booth featured a cardboard one with the face cutout for smartphone photos.

It would be unfair to suggest that the exhibit hall represents what these summits are about. Instead, they are mostly a haven for policy nerds. For four days, attendees can revel in seminars with come-hither titles like “Ensuring the Authenticity of Online Legal Information,” “Drafting Durable Constitutional Amendments” and “New Policies in the World of Pensions.”

General sessions included Yo Yo Ma speaking about the benefits of arts education, Cindy McCain calling for more state action against sex trafficking and Andrew Zimmern on fighting hunger. 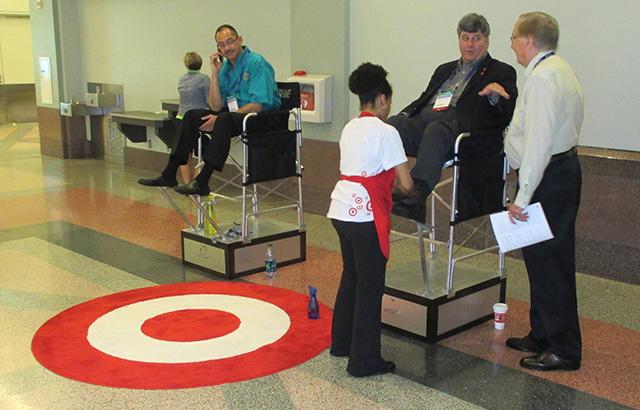 But anywhere that attracts legislators attracts those who want to influence them. The exhibit hall comes with its own rules for media coverage. Newsies could walk around at will but were asked to film, photograph and interview those in the hall for just two designated hours each day.

Tim Shellberg, president of Gordon Thomas Honeywell Public Affairs, said the exhibit hall is not nearly as full as it has been in the past. Chalk it up to the recession and the perception that Minneapolis might not be as much of an attraction as past locales like Chicago and Seattle.

Fewer exhibitors means less money for the conference. The NCSL collects money from those who have booths in the hall. The lobbyists have to pay to attend — up to $1,265, which is nearly double what lawmakers and legislative staff pay to register. In addition, the NCSL receives both annual support from corporations, unions and special interest groups as well as special payments to cover costs of the conference.

Platinum sponsors give at least $25,000. That’s where AT&T, Walmart, Amgen and Nike are listed.

For the Minneapolis conference, many Minnesota companies are represented, including Target, Xcel Energy, Hubbard Broadcasting, General Mills and the Mayo Clinic. 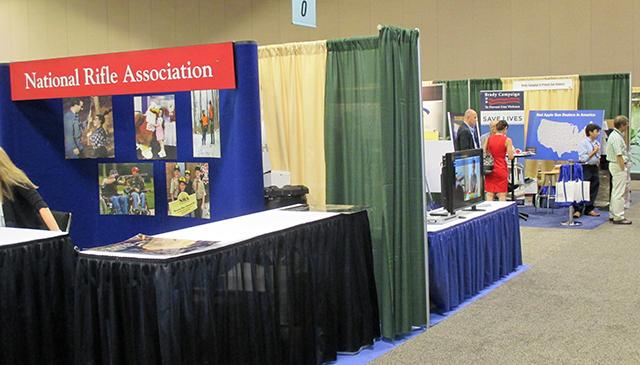 MinnPost photo by Peter Callaghan
The NRA booth, foreground, and the Brady Campaign to Prevent Gun Violence booth nearby.

Becky Bogard agreed that the recession took its toll on attendance at the summit, but thinks that next year’s conference in Seattle will attract more lawmakers, and the groups that want to be around them. But then, she might be biased: The lobbyist for the Washington state hospitality industry was wearing a strawberry costume.

Next to Bogard was state Sen. Randi Becker in a carrot costume. Apparently the getups were meant to conjure images of Seattle’s Pike Place Market. At the state’s booth, people could pretend they were tossing and catching salmon, the market ritual that shows up in every sports broadcast from the city. This salmon, however, was a stuffed animal.

In addition to offering free shoes shines just outside the exhibit hall, Target had a booth inside where attendees could charge electronic devices. The slogan, “Let Target Charge You Up” might be an unfortunate one given the company’s data breach problems, but no one seemed to notice.

And then there were the dueling booths. Separated by a half dozen booths were the Pro Choice Coalition and Minnesota Citizens Concerned for Life. And just steps away from the National Rifle Association was the Brady Campaign to Prevent Gun Violence. 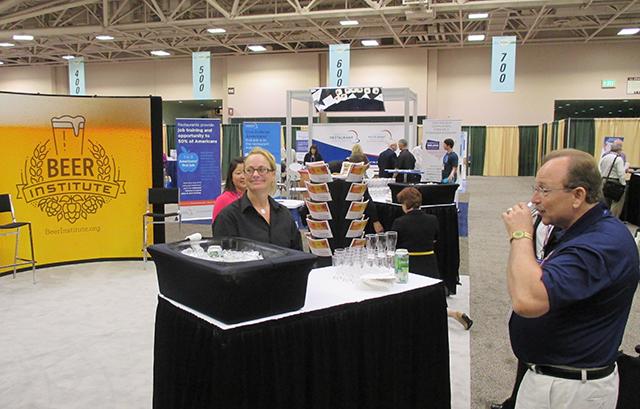