Eddie Frizell was working as a cop and commander in Minneapolis’ first precinct, downtown — arguably the toughest beat in the city, he says — when he realized how bad police work there could have a ripple effect across the state.

“These are corporate executives. You’re talking to folks who run Xcel Energy and Target, and if they don’t feel safe and pull their businesses out of downtown, we are in trouble,” he said. “With downtown Minneapolis goes the city and then goes the state.”

That’s when Frizell started digging into the management in the Hennepin County Sheriff’s Office. What he found, he says, was a “severe morale issue” and mismanagement of funds, which has kept money from going to on-the-ground police work in places like downtown Minneapolis.

Frizell has decided to take those complaints to voters this fall in his attempt to unseat two-term incumbent Hennepin County Sheriff Rich Stanek, who is seeking a third round as the county’s top law enforcement official.

The race has already created strange bedfellows in the local political and law enforcement communities. Frizell, who will likely be backed by the local DFL Party on Thursday, has been endorsed by a majority of the Hennepin County sheriff’s deputies that Stanek oversees. But Stanek, a police officer and former Republican legislator, boasts his own broad swath of endorsements from across the political spectrum, including DFL legislators and Minneapolis City Council members. Technically, the race and the office is non partisan.

The election represents the first time voters in Hennepin County will really have a chance to vote on the job Stanek has done as sheriff since he first won the office back in 2006. Four years ago, Stanek faced only write-in opponents — including “Kitten for Sheriff” — and won with nearly 98 percent of the vote.

All this for a complicated job in the state’s largest and most diverse county: The sheriff’s office works with dozens of local law enforcement agencies and shares territory with more than three dozen state legislators, two members of Congress and 45 mayors and city councils. And the office will have a major issue to tackle in the coming years, not to mention a chance to remake the department thanks to an expected wave of retirements.

“I fully expected to have a challenger, and frankly, I’m surprised it’s only one,” Stanek said. “It’s a public service position that’s highly sought after.”

Frizell never intended to make law enforcement a career. After graduating from the University of Iowa in 1987, he opted to join the military to help pay off his student debt. “I had no intent of making it a long-term thing,” he said. But before long, though, Frizell found himself in officer candidate school. He ultimately chose to serve in the National Guard so he could have a more stable home life, and he eventually worked his way up to commander of the 1st Squadron, 94th Cavalry, 1st Brigade Combat Team, 34th Infantry Division. 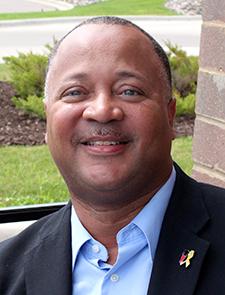 Twenty year ago, however, Frizell needed a day job, so he looked into law enforcement. He entered the Minneapolis police cadet program in 1993, and steadily moved through the ranks to his current position as deputy chief of patrol.

Frizell said he excels in community policing — working with leaders and businesses in a neighborhood to get more tips, catch more criminals and help residents feel safe. “Either you are able to talk to the people and get the community and businesses on your side or you are going to have a tough time,” he said.

In July, a majority of the Hennepin County Sheriff’s Deputies Association opted to back Frizell’s campaign. With 87.5 percent of the rank-and-file voting, 75 percent of the members endorsed Frizell, with only 9 percent endorsing Stanek. About 15 percent voted not to make any endorsement.

“Our members expressed that they were interested in a change. Eddie has a strong history with the Minneapolis police and he has an extensive educational and military background. There are also frustrations with the current administration — some scheduling issues and some morale issues,” said Al Saastamoinen, president of the association, who wouldn’t elaborate further.

Stanek is a familiar face in law enforcement and political circles. He spent more than 20 years on the Minneapolis police force and served several terms in the state House representing the Maple Grove area. In 2003, he left his seat to take a post as head of the Public Safety Department under former Republican Gov. Tim Pawlenty.

That position was short lived — Stanek resigned in 2004 after a 1992 deposition surfaced from a court case when Stanek still served on the Minneapolis police force. In 1989, Stanek was driving home when another car, driven by a Liberian resident named Anthony Freeman, collided with his. Stanek said he initially thought Freeman was drunk and saw smoke coming from the vehicle, but Freeman said Stanek approached his car screaming racial slurs. In his deposition, Stanek admitted that he told racist jokes while on and off duty with other officers, but he said he never did so in public.

After those comments came to light, Stanek quickly went to work mending fences. He worked with local law enforcement and community groups to improve his reputation and launched his first campaign for Hennepin County Sheriff. In the general election, he beat his DFL opponent Juan Lopez with more than 64 percent of the vote. In both of his races for re-election, Stanek has had support from many members of the African American community. 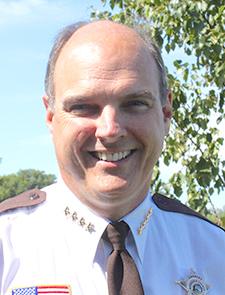 During his tenure as sheriff, Stanek has been a part of conversations between law enforcement officials from across the country, including President Barack Obama, over measures to reduce gun violence by expanding background checks. He’s also a regular at the state Capitol, where he often testifies on law enforcement issues.

“He does what he does and he does it well,” said Minneapolis City Council member Blong Yang, who represents North Minneapolis and chairs the city’s public safety committee. “He’s going to be tough to beat. This is a huge county for a first-time candidate. Rich has served and he has name recognition.”

Stanek said he has helped reduce violent crime in the county by 36 percent since 2007. “I get to mix public policy, public safety and public service, all three into one career, and for me it’s a career,” Stanek said.

Still, his time at the helm hasn’t been without controversy. In 2007, Mayor R.T. Rybak and Minneapolis police chief Tim Dolan criticized Stanek for producing a slick 26-minute training video on the collapse of the I-35W Mississippi River bridge and taking credit for actions that weren’t his responsibility.

For some, the video was a reminder of Stanek’s political ambitions. A year earlier, Stanek was in the mix as activists considered who would be their nominee for governor, and the company that produced the training video was the same one that handled advertising and marketing early on in that process. Stanek ultimatley didn’t seek the nomination in 2006, which went to Pawlenty.

All about the numbers

So far, the race has been mostly about interpreting statistics. Frizell points out that administrative costs have increased in the Hennepin County Sheriff’s Office from $6 million to $12 million over the last two years, something he intends to cut back if he’s elected by the voters this fall. The sheriff’s budget for 2014 is nearly $92 million.

But Stanek said Frizell is not telling the whole story behind those numbers. Cutbacks were made in the sheriff’s office several years ago that led to a group of clerical workers being lumped into an administrative department. That is the cause for much of the increase, he said. “He’s being less than truthful to the people he’s talking about it with,” Stanek said.

Frizell also says he wants to bring more diversity to the sheriff’s office, especially with the county likely facing retirements by more than 200 law enforcement officers over the next several years. He says he wants to broaden the pool of candidates, pulling in young women and minority veterans returning home. They’ll be looking for work, much like he was two decades ago. The issue of law enforcement diversity has drawn intense scrutiny in the aftermath of the events in Ferguson, Mo., where a white police officer fatally shot an unarmed black teenager.

Both Hennepin County Sheriff’s office and the Minneapolis police have struggled with hiring women and minorities. About 20 percent of the Hennepin County Sheriff’s Office employees are women, and about 9.5 percent are minority, Stanek said. That’s a 2 percentage point increase in minorities since he was first elected, but still falls below community levels. For instance, more than 18 percent of the city’s population is black. On the city’s police force, about 15 percent of the officers in the field are female, while about 9.2 percent are black. Asian or Hispanic officers make up about 9 percent of the force combined.

Frizell likes to say that one of his best attributes is that he’s not a politician, despite the fact that he’s seeking the DFL endorsement. “I’m not trying to be a Washington insider,” he said. “This would be my last job until they break out the walker on me and tell me, ‘you’re done.’ I see it as bringing the sheriff’s office back to a local focus, back to Hennepin County.”

Despite rumored ambitions for higher office, Stanek says this is the job he wants. “There’s more to be done on things like trafficking, heroin, gun violence, mental health — the list goes on,” he said. “If it’s a bad thing to sit across the table and have a tough discussion with President Obama about reducing gun violence and have him visit North Minneapolis two weeks later, then shame on me.”