And so it continues.

Two years ago, plans for a five-story residential building in Linden Hills were rejected by the Minneapolis City Council after neighbors voiced concerns that the 40-unit building was too large and out of character for the neighborhood.

Six months later, developer Mark Dwyer revised his plans and won city council approval for a three-story version of the building, this time with the support of the neighborhood.

Now he wants to go back to building a four-story building — and the neighbors are once again opposed to the project.

This time, though, the four-story project has won approval of the Planning Commission — and, this week, the City Council Zoning and Planning Committee.

The height of the building is at the heart of the argument. At three stories, the building would have been 42 feet tall. At four stories, it would be 56 feet in height. (The rejected plan for the original five-story building was three feet taller than the latest plan.)

“The resulting proposal, even with the four units stepped back on the roof is about 57 percent of the gross square footage of the original building,” said Dwyer, “it’s half of the units, it is half of the parking stalls and half of the retail.”

Despite receiving approval for the three-story version of the building nearly two years ago Dwyer said he did not begin construction because of a slow real estate market, and that the four extra units were added to make up for increased construction costs.

“This is a higher-end product,” said Dwyer. “In a million-dollar condo, the expectation for ceiling heights is different than in a condo that is less than half that cost.” He estimates selling prices in the building to be between $650,000 and $1.4 million.

For the four-story project to move forward, the developer must acquire a conditional use permit, or seek to have the property re-zoned, which can be a lengthy process. Opponents of the project are calling Dwyer’s plan an “end run” around the zoning code, even suggesting that it’s illegal.

“This developer brought in a project in 2012 seeking a variance. It was granted,” said Jane Prince, an attorney for Linden Hills Residents for Responsible Development. “Now he is back saying he cannot develop the project.”

Prince argued that the Minnesota Supreme Court has outlined conditions for allowing zoning variance and those do not include economic considerations. 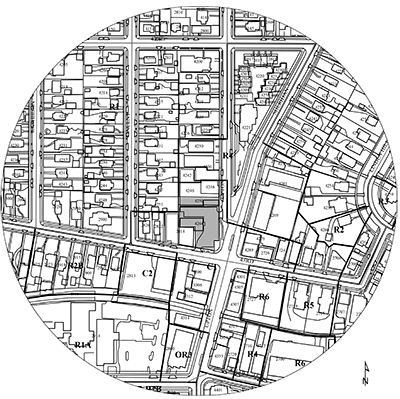 City of Minneapolis
The project (shaded in gray) will be located at the corner of
Upton Ave. S and W 43rd St. in Linden Hills.

Two years ago, when the five-story project was under consideration, Linden Hills residents were beginning work on what the city calls their “small area plan,” which outlines what residents want in their neighborhoods. That plan has since been completed, and — because of a last-minute change — does allow for the four-story project.

“The Linden Hills community spent $60,000 and 18 months, countless hours to develop this plan; we worked in good faith,” said Jean Johnson, who explained that the working group was opposed to any building more than three stories at the proposed building site, but was told by city staff that they must include a provision for exceeding that height. “Can we, as a city afford to throw out that much human capital for the sake of one developer,” said Johnson.

Many in the crowd in the Council Chambers were opposed to the plan, but there were some who came to voice support. “I was born and raised in Linden Hills,” said Bruce Allyn, who said he has watched his neighborhood loose residents and businesses. He is hoping the condominium project will attract new people and, in turn, more commercial services. “I want to live without my car. I have no grocery store.”

David Myers moved to Linden Hills this past spring and lives in a house adjacent to the proposed project. “A 42-foot [three-story] height maintains the character of the neighborhood while permitting density appropriate to an urban environment,” said Myers. “A 56-foot height dwarfs our one-story home, blocks light to our garden and sets a precedent for other developers in this quaint livable neighborhood.”

The Zoning and Planning Committee voted unanimously to approve the four-story project. The full City Council will vote on the matter August 15.