It’s a bit of a balancing act for an elected official to craft a state-of-the-whatever speech — city, state, nation — that sings the praises of the jurisdiction you govern without sounding like you’re just bragging.

Humility helps. Humor often works. St. Paul Mayor Chris Coleman used both during his State of the City speech Thursday. (Because the speech came between performances by St. Paul musical groups, starting with the St. Paul Chamber Orchestra, Coleman began his speech by saying, “This is the worst intermission ever.”)

But perhaps the most effective strategy is to shine a light on others who helped you accomplish what you are, in fact, bragging about: business leaders, philanthropists, foundation leaders, social services managers, volunteers, even Donnell Gibson, the man who rescued a family from a house fire earlier this month. All got a piece of the praise for a city that Coleman declared was “sound.”

“So today, I offer this year’s State of the City address as a toast to all we have accomplished this last decade – to the dreams realized, to the promises fulfilled, to a renewed, vibrant and growing Saint Paul,” Coleman said.

It was Coleman’s 10th such speech in his 10th year in office — which means that just about everything the city is experiencing today, for both good and ill, happened on his watch.

He started with the good, recalling the things he called for in that first speech, and noting how many had become reality. “Quoting Holocaust Survivor Elie Wiesel, I said that there comes a time when we must make a choice between repeating ourselves and choosing to grow,” Coleman said. “I asked that we intentionally implement our dreams for Saint Paul and propel our city forward with energy, inclusiveness and focus. There were many opportunities on the horizon. But few items were fixed into the city’s future.”

But now, Coleman said, many are in concrete, not the least of which was the new hall in which he delivered his speech. Others are the Green Line light rail project, the new ballpark in Lowertown and the after-school program called Sprockets. And he used the speech to give formal confirmation of the “oft-rumored” plans that Ecolab will purchase the Travelers Tower, expanding the company’s presence downtown.

“There is so much more to celebrate in our city,” Coleman said. “Our population is growing;  graduation rates for all children are up; crime is down across the city; we have once again earned a AAA Bond Rating; there is renewed vitality in neighborhoods across the city; property values are rising; investment in the city is at an all-time high; arts and cultural amenities are bringing back night-life to downtown; and The Minnesota Wild are in the playoffs.”

Mayors, governors and presidents are all expected to have a bit of a cheerleader in them. That’s even more important in second cities like St. Paul that don’t think they get their due. Coleman alluded to that with a reference to the recent Atlantic Magazine article, “The Miracle of Minneapolis”: “Of course, the real miracle was that it even mentioned St. Paul,” he said.

It was there that Coleman ventured into the other expectation of these speeches — the troubling failure of the region to offer the same educational and economic opportunities for all. “But while ‘the miracle’ is true for some, it is not for all.” He devoted a third of his time to describing the equity gaps and citing the attempts he and the city have made to address it. One of those is Sprockets, which now involves 90 organizations and 20,000 participants — 83 percent of whom are racial minorities, and 80 percent are from low-income families. 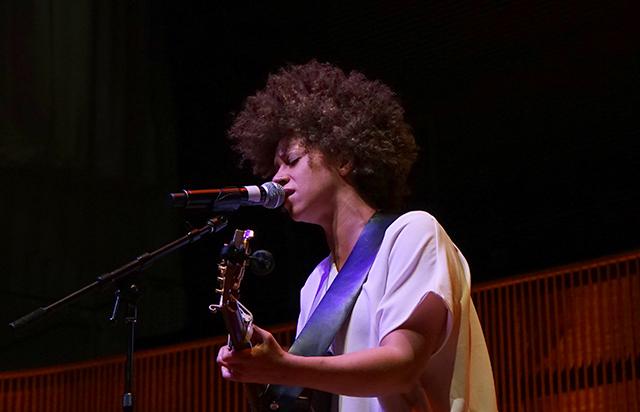 MinnPost photo by Mike Dvorak
Chastity Brown was one of many artists who performed following Mayor Coleman’s speech Thursday night.

Another rule is to mention members of the city council, to connect them to the accomplishments of the city. That was easier for Coleman, with seven St. Paul City Council members, than for Minneapolis Mayor Betsy Hodges, with 13 (which could explain why her state of the city speech two week ago was twice as long). About the only one in the room not called out was St. Paul school Superintendent Valeria Silva, in attendance a week after Coleman intervened to keep her from pursuing a job in Florida.

And for Coleman, thought to be considering a run for governor in 2018, speeches like these are examined for clues of ambition beyond the city limits. Coleman was interested in the job four years ago but did not run. In the last year, however, he has assembled a mayoral staff that could make up the core of a pretty potent campaign operation. Yet Coleman left regional, statewide and national issues to those other elected officials, and those other speeches. With that election three years out, he is prepared to be judged on how well he’s done as mayor.

“We are a great city,” he concluded. “The state of Saint Paul is strong. It will be stronger when all share its richness. We have accomplished a great deal this past decade. Let us keep the momentum going.”