Earlier this year, Minnesota Pollution Control Agency officials approached Gov. Mark Dayton with a startling find: Of the 93 streams in southwestern Minnesota they’d surveyed as part of a 10-year study examining the state’s watersheds, only three were habitable for fish, and only one was considered safe for humans to swim in.

In response, the Democratic governor, then just a few months into his second and final term, launched an aggressive push to establish 50-foot wide buffer strips between nearly every state waterway and farmland, from which fertilizer and other agricultural runoff had become one of the leading causes of the state’s deteriorating water quality.

Dayton immediately ran into pushback from farming groups, who said his proposal was excessive, expensive and applied a one-size-fits-all approach to farms addressing the issue.

Still, Dayton hasn’t backed off on his push for a deal to protect the state’s watersheds. On Wednesday, he held his second press conference in two weeks to talk water, this time focusing on its drinkability.

“My learning curve on this subject has gone up exponentially over the last six months, and I wish it had begun four years ago,” Dayton said of his focus on water quality. “But I intend to make it a high priority over my second term in office.”

For some, Dayton’s fixation on water quality feels sudden, even though it’s hardly the first time the governor has expressed concerns about the environment. Yet it’s clear he’s become emboldened on environmental issues in his second term, taking on groups like the farming industry in a way he admits he couldn’t while he was running for re-election.

“I’m not sure we would have seen a buffer initiative in 2014, but we have one in 2015, and I think that reflects a difference that comes from not being up for re-election and not shying away from controversy,” said Scott Strand, executive director of the Minnesota Center for Environmental Advocacy.

The new tone has caused some frustration among agriculture groups, who’ve thrown around the term “bully” to describe Dayton’s new water quality stance, but it’s a welcome change for environmentalists, who say Dayton has positioned himself to be the most effective governor on environmental issues in 40 years.

“What he’s doing with buffers and water quality is really nation-leading,” said Rep. Rick Hansen, DFL-South St. Paul, who has been working to pass buffer-type legislation for the last decade. “It’s showing the power of the executive on how we can lead, and it’s been a long time since we’ve had leadership on this that’s not clearly political. He’s taking risks. He’s changing the game.”

Breaking with a ‘holding pattern’ on the environment

Former DFL Gov. Wendell Anderson was one of the first chief executives to make environmental issues a priority, signing the Minnesota Environmental Rights act back in 1971. Republican Gov. Tim Pawlenty did his part in 2007, environmental groups say, when he signed an initiative to require utilities to generate 25 percent of their electricity from renewable sources by 2025. 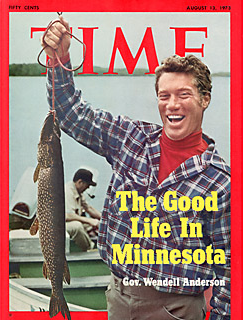 But overall, there’s been something of a “holding pattern” on the environment from governors over the last decade, said Strand. “Most of the major environmental laws we deal with today were adopted back in the 1970s.”

In his first State of the State address in 2011, Dayton said he would make  clean energy and the environment a priority during his tenure as governor. But coming into office in his first term, Dayton faced a Republican-controlled Legislature and a multibillion-dollar budget deficit. Environmental groups said he mostly played defense during his first two years in office, blocking things like an attempt to change the state’s water standards to protect wild rice crops. But he also signed legislation to speed up the business environmental permitting process, a proposal that didn’t thrill some green groups.

In 2013, Dayton was heading into session with a DFL-controlled Legislature, and he set the tone for new environmental changes in his State of the State address. “In Minnesota, we have made real progress,” he said. “The question is: Are we progressing fast enough?”

Over those two years, Democrats passed a number provisions celebrated by environmental groups: They reversed some spending cuts in environment budgets; created a 1.5 percent solar energy standard for utilities by 2020; passed protections for pollinators, including the creation of a panel to investigate bee deaths; and increased funding to fight aquatic invasive species.

“What’s good about the governor is, he looks at the facts, digests it, talks to the people who are impacted, and if he really sees a problem, he’ll actually act on it,” said Steve Morse, executive director of the Minnesota Environmental Partnership. “He’s not as timid as some other politicians are.”

With Republicans having won control of the state House last fall, Dayton is once again facing divided government, and he often finds himself both blocking and tackling on environmental issues these days.

On the House GOP’s environment and natural resources bill, for example, he wants to stop a number of policy provisions that aim to cut back on the power of the MPCA to set new regulations. One of those measures attempts to suspend new water quality rules until the state gets a cost-benefit review from an independent, outside agency. Another would prohibit the MPCA from applying a sulfate water quality standard on wild rice waters until the agency designates which waters are subject to the standard. Yet another provision aims to strip the power of the MPCA’s Citizens’ Board, a group of appointees who review certain permits and can order environmental reviews on projects.

Supporters of the House bill say one of their biggest concerns is a looming decision on new water sulfate standards for wild rice waters, which could impact new mining operations. They’re also worried about the state’s phosphorus standard for lakes and streams, which local governments say is too rigorous and could cost them millions to update their wastewater treatment systems. And while House Republicans have some support from a mining and rural-friendly Senate DFL majority, Dayton has warned against passing any of those provisions in their budget bills this year.

On his buffer bill, Dayton has actually toned down his rhetoric from earlier in session, when he put the blame for the state of the state’s water quality squarely on the agriculture industry. Since then, he’s tried to be less pointed, often referring to other factors at issue, including urban wastewater treatment facilities. He’s also said he’s open to compromise on exactly how large buffers should be. Even so, he’s still facing opposition from the state’s leading farm groups, like the Minnesota Corn Growers Association, AgriGrowth Council, Minnesota Farmers Union and the Minnesota Farm Bureau Federation.

Some of those groups say Dayton’s new approach on environmental issues is making it difficult to compromise.

“There are times when we felt that he was listening, and there have been times after listening where we would pick up the newspaper and read someone that was obviously not the same message that we had gotten before,” said Doug Busselman, policy director with the Minnesota Farm Bureau. “It’s going to be challenging to work cooperatively. We’ve said throughout that we want to cooperate and we believe the voluntary conservation practices that are being carried out on an ongoing basis by landowners matter. I think this particular approach of being very hard-lined makes it very difficult.”

Republicans say there is room for some kind of a deal on buffers yet this session, but they are worried that time is running short. They prefer a solution that tries to hold more water on the land through wetlands. “[Dayton’s] highlighting of the issue brings it to everyone’s attention, and that’s not bad,” said Rep. Paul Torkelson, R-Hanska. “The timing is really the difficulty here. It’s so close to the end of session, it’s passed the time where we would do the normal committee process and have hearings and the like.”

PolyMet as a test

Dayton’s efforts on the buffer zones is only one part of his plan to protect the state’s water, though. Over his final years in office, he also wants to improve drinking water quality around the state and tackle a backlog of improvements to wastewater treatment plants. He wants to fund a new water quality director out of his office starting in July, and he thinks Minnesota can be a trendsetter for other states on the right way to do it. “We can develop the technologies and approaches that can provide new businesses and new job opportunities and the like,” he said.

He said it’s not hard to speak strongly about a water quality mandate in Minnesota, where voters approved a 25-year, 3/8-cent sales tax increase on themselves back in 2008 to spend on water conservation, among other things. That vote shows Minnesotans “clearly want clean water and they are willing to pay for it,” he said.

But his standing with environmentalists will soon face a critical test — when he will have to make a call on the future of projects like NorthMet, the PolyMet-proposed copper-nickel mine in Hoyt Lakes, and one by Twin Metals. The Iron Range has been shedding hundreds of mining jobs over the last few months, and Dayton has been sensitive to the area’s economic woes. But environmentalists say nonferrous mining projects could damage the area’s pristine lakes, rivers and the Boundary Waters (BWCA) for hundreds of years to come.

When it comes to Dayton’s looming decision on PolyMet’s plans, environmentalists are careful not to be too critical of the governor, and more than a half dozen lawmakers and environmental group leaders said the same thing: They’re happy the governor is letting the environmental review process play out.

“We’ve appreciated his support thus far in allowing the process to take place, to allow public input and allow the process the time in needs,” said Margaret Levin, state director of the Sierra Club. “There are a lot of really critical decisions coming up. I think that Minnesotans are expressing a lot of concerns about whether sulfide mining can be done safely.”

For his part, Dayton is preparing for what he knows will be an “explosive” outcome — no matter what he decides. “It’s going to be one of the most,  perhaps the most contentious issue in my two terms. I’ve seen the kind of extreme passions it arouses on both sides,” Dayton said in a recent interview with MinnPost.

“It’s not going to go away in one session. If it’s not approved, the folks who are advocates will be pushing for it. And if it is approved, those who are opposed to it are going to take it to court and do everything they can to defeat it. It’s going to be with us for at least the next several years, but it’s also very, very important given the [jobs] situation with taconite mining now in Northeastern Minnesota. It’s going to be tough.”