The proposed site for a new soccer stadium is still only a spot on the map. But already the prospect of a new downtown sports facility is creating a development buzz around a downtown district dubbed West Loop. Today, the district consists of bland one-story industrial buildings adjacent to the Minneapolis Farmers Market. At the turn of the last century, the area was known as Oak Lake, a busy residential neighborhood and an important way station for the city’s Eastern European immigrant Jewish community.

The first wave of Eastern European Jews began arriving here in the early 1880s, just as Minneapolis was undergoing a development boom. Initially these mainly impoverished immigrants, fleeing persecution in the Russian empire, settled in the ramshackle neighborhood around North Washington Avenue, near the site of today’s Target Field. They crowded into modest two- and three-family homes on what was then the edge of Minneapolis’ downtown commercial district.

Lacking American job skills, many of the early Jewish settlers became peddlers, the only occupation they had known in the old country. Jews were told to stay south of 7th Avenue on Washington. If they ventured north of that invisible dividing line, gangs of young German boys might attack them, turning over their pushcarts and pulling their beards.

By the turn of the century, many of the pushcart peddlers were moving up the economic ladder and had become shop owners and wholesale distributors. As they prospered, they began eyeing Oak Lake, a nearby neighborhood with more substantial homes than those in the decaying North Washington district.

Curving streets around a park 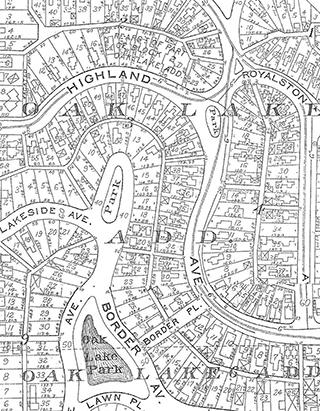 Courtesy of the Hennepin County Library
The early street maps for this compact residential district
show curving streets surrounding a park with a small pond
at its center. (Click for larger version.)

The early street maps for this compact residential district show curving streets surrounding a park with a small pond at its center. The district was bounded generally by 8th Avenue on the North, Lyndale on the West and the Great Northern Railroad line on the East and South.

The area had been platted in 1880, when it was still far enough away from the city’s center to acquire an image of residential exclusivity. One observer described the district as “a beautiful area, hilly on its west side and heavily wooded. In its early days, it was considered the finest section and comprised only of the best people — they were substantial upper-middle-class people engaged in such occupations as those of bank cashiers, newspaper editors, attorneys and real estate men. … Most of the homes constructed in Oak Lake were large, spacious dwellings.”

In the 20 years after the district was first settled, Minneapolis experienced explosive growth as its population quadrupled in size, from 50,000 to over 200,000. This demographic bulge put intense pressure on the ring of neighborhoods, including Oak Lake, that surrounded downtown.

With its original center on North Washington, nearby Oak Lake represented a natural expansion zone for the Minneapolis’ growing Jewish community.

When they began moving into Oak Lake near the turn of the century, Jews were not welcomed. By 1890, “the presence and pressure of the Jews began to be felt,” noted one observer from that period. “At first there was bitter opposition to the Jewish invasion. … People became alarmed and threatened at the number of Jews. Many were small dealers, some rag peddlers, some fruit men, still others dealing in junk.”

Revealing his own bias, the observer went on to report, “even the pride and dignity of Highland Avenue finally succumbed to this affront when the first Jewish family moved into the Highland district. To close the estate, one of the large residences was sold to a chicken dealer. From this time on, the whole Oak Lake district was rapidly taken over by Jews.”

By 1900, Oak Lake was the center of Eastern European Jewish community life. One of the city’s major Orthodox synagogues, Mikro Kodesh, was originally located there. Kessler’s Hall, at the corner of Sixth Avenue North and Lyndale, was the site of many of the community’s social events.

Sixth Avenue would later be widened and named for the charismatic Floyd B. Olson, who had served as Minnesota’s governor during the early years of the Great Depression. Olson had grown up on the North Side, not far from Oak Lake. As a boy, he had been a “Shabbos goy,” the term used to describe young non-Jewish men who came into Jewish homes on Friday night to light the gas lamps, something observant Jews were forbidden to do on the Sabbath.

Oak Lake’s time as an immigrant way station was relatively brief. By World War I many Jewish families, including this author’s grandparents, had moved beyond the hilly district, with its winding streets, farther to the west to a neighborhood now known as Near North. Soon the North Side Jewish community would extend all the way to city’s western boundary at Theodore Wirth Park. 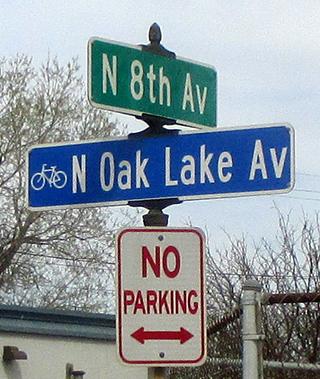 MinnPost photo by Iric Nathanson
The only reminder of the district’s early history is a two-block
-long street, running between 8th Avenue and Olson Highway,
still identified as Oak Lake Avenue.

Once the neighborhood of choice for an emerging immigrant community, Oak Lake went into a gradual decline as many of its large homes were converted to seedy rooming houses. As the slide continued through the years of the Great Depression, a major transformation was about to take place.

In 1935, city officials unveiled plans to relocate the Minneapolis Farmers Market to a new 13-acre site in Oak Lake. Funded in part with a grant from the Roosevelt administration’s Public Works Administration, the new market opened in May 1938 with enthusiastic support from more than 100 local growers who leased space in the new municipal facility.

Seventy-five years later the Farmers Market is flourishing at the same location, now in the shadow of I-94. But the lake, the curving streets and the wooded hillside have long since disappeared from the local landscape. The only reminder of the district’s early history is a two-block-long street, running between 8th Avenue and Olson Highway, still identified as N. Oak Lake Avenue.