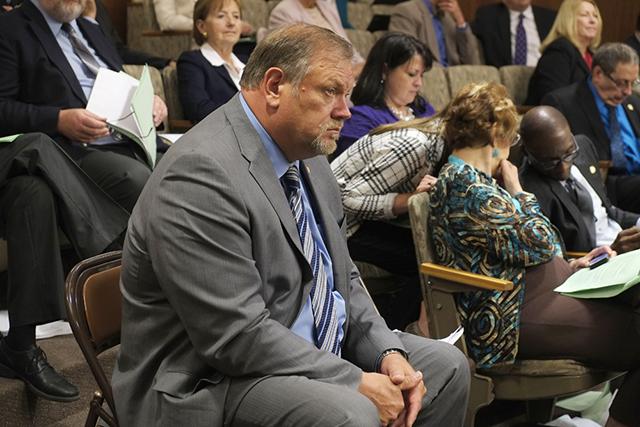 It looked like the setting for a mock legislative session: Instead of desks and nameplates on the floor of the Minnesota House, there were theater-style seats assigned by slips of sticky paper, while a small lectern stood in for the Speaker of the House’s usual podium. There was a gallery for the public to watch, though it only had 20 seats. And there was a version of the Abe Lincoln portrait that usually hangs at the center of the chamber and watches over proceedings, though it was a miniature one.

However it seemed, though, it was all very real: the setting for a historic, one-day 2015 special legislative session.

The usual Capitol chambers were closed down in the midst of a messy restoration project, so legislative staffers retrofitted a ground-floor hearing room in the State Office Building to look like a miniature version of the Minnesota House. Down the hall, a similar room had been set up for the Senate, where they imposed the same strict dress code and rules of decorum that senators are required to follow in the Capitol chamber.

“Members, we are making a bit of history today,” House Speaker Kurt Daudt said at the start of session, noting that this is the first time in 110 years a special legislative session has been held outside the halls of the state Capitol.

In the end, though, the odd setting of the proceedings was almost more notable than the final outcome — despite the hours of drama involved in getting to a resolution.  After weeks of negotiations, lawmakers sealed the deal early Saturday by approving three budget bills.

While there was uncertainty throughout the day about passage of an agriculture and environment budget, lawmakers ultimately passed a bill that honored their leaders’ original agreement on a 38-29 vote, after ping-ponging the bill between the House and Senate chambers throughout the day.

Legislators also passed a $17 billion education budget that spends $525 million more on schools over the next two years, as wells as a jobs and energy bill. All together, the three budget bills account for roughly half of the state’s $42 billion two-year budget. A bonus: Legislators rounded up enough votes to pass a Legacy amendment funding bill and a $373 million total package of construction projects, two non-essential budget measures that ran out of time on the final night of the regular session.

Rifts in the DFL

But the back-and-forth drama of the session exposed serious rifts between some Democrats — and left much business unfinished.

Tensions were particularly high in the Senate, where a majority of DFL members opposed the final agriculture and environment bill that was negotiated by their leader, Senate Majority Leader Tom Bakk. Those senators were upset with provisions in the bill that rolled back long-time environmental protections and eliminated the nearly 50-year-old citizens’ board of the Minnesota Pollution Control Agency.

The first attempt to pass the bill, on Friday afternoon, failed in the Senate by a single vote, with very few DFL votes and fewer Republicans votes than had originally supported the bill. Bakk went back to the drawing board — and to his caucus — and emerged with a new plan: offering amendments to the bill that could win DFL support.

Sen. John Marty, DFL-Roseville, the lead opponent of the agriculture and environmental budget, amended the bill to restore the MPCA’s citizens’ board and eliminate a provision that would exempt mining sulfide waste from solid-waste rules. The bill passed, garnering many of the Senate DFL votes the previous version didn’t.

But Republicans complained that Democrats were backing away from a deal they had made with Dayton and other caucus leaders: to not support any amendments to the budget bills.

In the House, Republicans quickly took up the new bill — and amended it back to the way it was under the original deal, before sending it back over to the Senate for a final vote. “We are honoring the commitment we made to Minnesotans with the four legislative leaders and the governor,” Daudt said. “Now the Senate has the opportunity to do the right thing and send this bill to the governor.”

The final vote in the Senate ultimately passed, but not without Bakk having to make a deal with Senate Republicans behind closed doors to give them “significant, specific tax reductions” in a 2016 tax bill, Senate Minority Leader David Hann said.

“The new agreement calls for substantial Republican tax cuts to be added to already-planned reductions in the existing bill,” he said.  “We’re very satisfied with the concessions made by Democrats to deliver significant tax cuts in the next legislative session.”

The conclusion of the legislature this year leaves much up in the air for next session. Legislators left nearly $1 billion of a $1.8 billion budget surplus on the bottom line to deal with those tax cuts, as well as a long-term transportation funding plan sought by Democrats. Those topics failed to gain traction in divided government this year.

Dayton also didn’t get his number one priority, universal preschool education, and plans to continue his push next year.

A lawsuit could be looming as well over a change that would allow county governments to go around the state auditor’s office and seek private companies to do annual reviews. The provision was one of the final sticking points in special session negotiations between Dayton and House Republicans.