In the end, what were going to be painful cuts in the Southwest Light Rail project turned out not to be so painful after all.

Not that removing $250 million from the project budget didn’t take some sacrifice by the six cities along the line between Minneapolis and Eden Prairie. But in a plan finalized Wednesday, only one of the proposed 17 stations was eliminated — the Mitchell Road station in Eden Prairie — while another at Town Center was deferred. In addition, a number of parking ramps became surface lots, a significant bike bridge in Minneapolis was lost, the number of light rail cars was reduced and money for art, station furnishings and landscaping was reduced.

Yet compared to what had been on the table over the past two months to get the project budget back to around $1.65 billion, the final recommendations by the project’s Corridor Management Committee kept far more than it cut.

What was cut, what was kept

What was preserved? All of the stations in Minneapolis that had once been suggested as targets: Royalston, Van White and Penn Avenue. All will remain in the project. An elevator and stair connection from Lake Street to the tracks below was kept. And a seemingly inevitable plan to chop the final two stations at the end of the line in Eden Prairie to capture the needed savings was altered. The line will now end at Eden Prairie’s Southwest Station, near an existing transit center.

Minneapolis opposed any station cuts within the city, arguing that they create the best opportunities to offer meaningful transit connections to North Minneapolis. Eden Prairie wanted the line to reach Southwest because it provide access to more jobs and residents and it can better handle additional parking and bus service than would a terminus at Town Center.

“With that combination of changes, the core functionality of the line is preserved,” said Hennepin County Commissioner Peter McLaughlin. “We’re gonna have a successful line once it is up and running.”

Wednesday’s vote caps a two month process triggered by an updated budget released April 27, an update that pegged the cost of Southwest LRT just shy of $2 billion. That unwelcome news caused Gov. Mark Dayton to question the validity of the project, and to order reviews of the project itself, its budget and the capabilities of the Southwest Project Office staff. Now, after those reviews have been completed, the new project scope is expected to be adopted by the Metropolitan Council when it meets July 8. 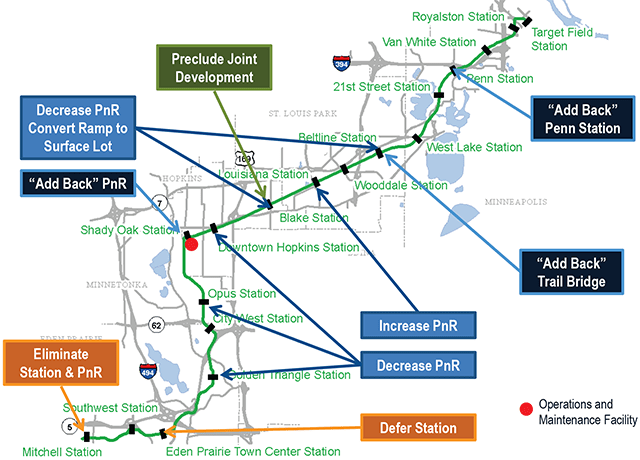 Metropolitan Council
In a plan finalized Wednesday, only one of the proposed 17 stations was eliminated — the Mitchell Road station in Eden Prairie — while another at Town Center was deferred.

Cities pitch in to reach goal

How did the members of the Corridor Management Committee, made up of elected officials from the six communities along the route, accomplish what was thought impossible a week ago: reach the Southwest Station while maintaining other amenities — and still cut $341 million from the budget?

By not cutting $341 million. The proposed cuts actually leave the project short of the goal — to match the previous budget of $1.65 billion — by some $80 million. To get to that target, the elected officials engaged in some budgetary sleight-of-hand in ways that will increase the money that will come from the federal government. For example, the rail right-of-way owned by Hennepin County now will be counted as a $30 million “contribution,” which will beget matching dollars from the federal government.

McLaughlin, in a move that he compared to a public radio pledge drive, then asked the cities along the line to commit to contributions to cover the final budget amount. Since each added local dollar would be matched by the feds under a planned 50 percent federal participation, each city’s contribution would essentially be counted as double the dollar value. 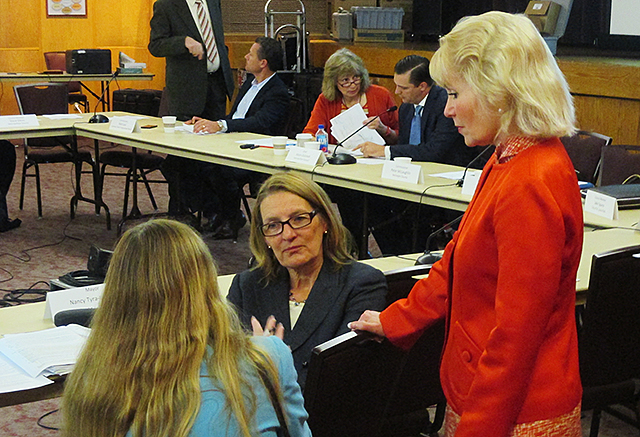 “It might have been an easier math problem to cut the line at Golden Triangle or at Town Center,” Spano said. “It would have been easier from a math standpoint. But we here in the room don’t believe that’s in the best interest of the project. We believe getting the line to Southwest is important.”

The only city opting out of this municipal passing of the hat was Minneapolis. Speaking for Mayor Betsy Hodges, who wasn’t in attendance, policy director Peter Wagenius said the city has contributed enough by giving up the Cedar Lake Trail bike overpass, and by acquiescing on the co-locating of freight and light rail in the Kenilworth Channel.

“The package that has been developed, including the deletion of the bike bridge for the Cedar Lake Trail, is something the mayor can support,” Wagenius said after the meeting. “But we just wanted there to be no confusion that when both Eden Prairie and Minneapolis are making huge contributions — financial and otherwise — there isn’t going to be a cash contribution on top of that.”

The committee kept the projected 2040 ridership well above 30,000 per weekday — coming in at 34,074 — and maintained other measurements to retain the project’s current rating of medium-high by the Federal Transit Administration. A drop in the rating might have pushed the line down the list among projects competing for federal dollars.

“We have not compromised our position with the federal government at all,” McLaughlin said.

After the meeting, Adam Duininck — who chairs both the Corridor Management Committee and the Met Council — said the budget cutting was difficult but worthwhile. “It’s been a challenge but I also think it was an opportunity for us as a region to show that when we have these big challenges in front of us we can come together and work through them. It could have been a really unproductive conversation, it could have ground this project to a halt. But what you saw was people stepping up and responding and being forward looking.”

What now? If the Met Council approves the new project scope next week as expected, the staff will present the new numbers to the FTA to make sure it is still something the feds will support. And because the cuts were reduced in scope, only Eden Prairie and Hennepin County must repeat the municipal consent process. Elected leaders of both governments said they expect consent to be granted. Minneapolis, which had the most-contested municipal consent process last fall, will not need to repeat the process. 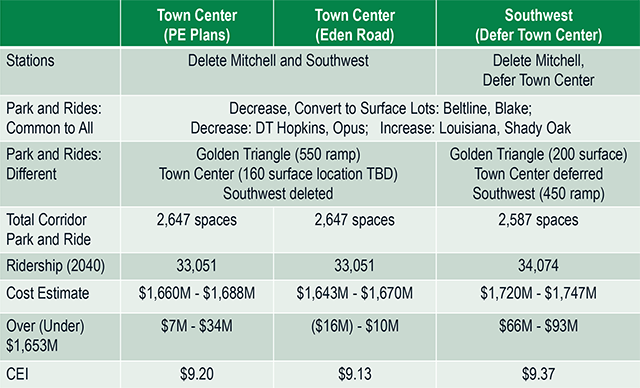 The final money issue is the last piece of local funding not yet committed — the state’s 10 percent share set at $160 million. That was called into question in April when the Legislature not only failed to add the final $120 million of its share, but cut nearly $30 million that had been appropriated in 2013.

Duininck said the Met Council and the cities on the line still hope to persuade the Legislature to be a partner. But when the staff presents the updated budget to the FTA later this month, it will include the use of “certificates of participation” as a possible replacement of the state contribution. Those are financing mechanisms that are sold to investors and repaid over time with revenue — perhaps from future state appropriations, perhaps from a part of the Met Council’s regular motor vehicle sales tax revenue.

“The plan is to not use them until next year and we hope to not use them ever at all,” Duininck said. “But it is an important mechanism to show that we can, if need be, provide a state share.”

$341 million, the easy way: How Southwest light rail (sort of) got its budget back on track