Typically, the television in the smoking room at St. Croix Cigars, located on the main drag in Hudson, Wisconsin, is tuned to Fox News.

“People in here lean conservative,’’ said Lon Feia, as he puffed on a stogie. “Fox gets it right.’’

There were a half-dozen men in the smoking room. Five of them nodded their heads in agreement. But one man, Nick, who opted not to give his last name, merely shook his head and laughed.

This got the other five shaking their heads.

“Every room’s got one weirdo,’’ Feia said. “He’s our token liberal. But actually he’s pretty easy to get along with.’’

The smoking room appears to be one of the few places in Hudson — the bedroom community of 13,000 on the eastern banks of the St. Croix River — where people do talk politics. This lack of debate might seem strange given that Wisconsin’s governor, Scott Walker, is a serious candidate for president — especially since Hudson and St. Croix County have been enthusiastically supportive of Walker in the past. In 2014, Walker carried the county with 59 percent of the vote during his reelection bid.

But these days, people in public places seem to tread ever so carefully when talk turns to their native son. The head of the state’s AFL-CIO, Phil Neuenfeldt, says that these days “Wisconsin is the most polarized state in the country” because of the governor.

The numbers back up that assessment. In Wisconsin, it seems, you’re either really for Walker or really against him. Polls show that Walker’s favorability ratings in Wisconsin have dropped eight points — from 49 percent approval in October to 41 percent in late April. The same poll, conducted by Marquette University, showed that 78 percent of Wisconsinites were opposed to cuts to K-12 education and 70 percent opposed his proposed $300 million cut to the University of Wisconsin system, a cut that was reduced to $250 million by the time it got through the Republican-controlled state legislature.

“It’s just better never to talk about him,” said a woman who was shopping on main street and who would not give her name. “That’s especially true if you have friends who are teachers.”

It’s early, of course, but at this point in the unending presidential election cycle, you’d be hard-pressed to spot a “Walker for President” sign — or bumper sticker, bobble heads or T-shirt — anywhere near downtown Hudson’s main street (which is actually 2nd Street).

Take a bit of a detour, though, and you soon realize there are actually two Hudsons. There’s the Hudson that most of us see from I-94 as we cross the St. Croix River heading into Wisconsin. It’s a place of surface parking lots and every imaginable chain store.

“We call that Anywhere USA,” said Sandee Madigan. Her shop, Dilly Dally, is a gift shop downtown — in the other, older, more tranquil Hudson. In 2000, Madigan was among a group of mostly women who saw potential in the old downtown, which had slowly deteriorated into a place of karate studios and auto-parts shops and empty storefronts.

One by one, new businesses — dress shops, restaurants, small art galleries, a bookstore, a chocolate shop, an ice cream shop, unique gift shops, the cigar store — brought old Hudson back to life. It’s lovely, it’s civil, and it’s not the sort of place where you bring up Scott Walker — at least not on pleasant summer days.  Perhaps that will change by next April, when Wisconsin holds its presidential primary (and if Walker’s still in the race).

Elizabeth Bruch, an owner of a gift/clothing/other stuff shop called the Purple Tree, says that people in Hudson are practiced at holding back on passionate, but sensitive, subjects.

“We’re a border community and it’s very divided between Packer fans and Viking fans,” she said. “We’ve become used to keeping our personal opinions inside.”

The Purple Tree is what Bruch calls a “mission” business. The missions: fair trade, green, peace and social justice. It was suggested to Burch that those “missions’’ don’t sound as if they line up with a Walker agenda. She only smiled.

“Really, people just don’t talk about that in here,” she said. “We did have a Minnesota man who came in not too long ago. He bought some things and then he said, ‘I wish I lived in your state, then I’d have Scott Walker as my governor.’ I said, ‘That’s nice. You could move here.’ ” 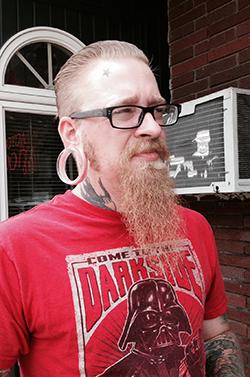 At Ink Factory Tattoos, there’s plenty of interesting stuff to talk about. Why bother with politics?

“It might surprise people,” said Andy Whitehead, the piercing specialist at the store. “But most of us are really a bunch of science and video geeks. The big conversation here for a while was Pluto, then, after that there was Kepler-452b.”

(An aside: Whitehead has ear lobes stretched about two inches below what most would consider a normal ear lobe location. It’s an interesting look, though Whitehead warns that there can be drawbacks, especially in a cold weather climate: The stretched lobes are susceptible to frostbite.)

Frostbite, space exploration, video games, football, lion hunts, romance — these all are worthy subjects of discussion at the tattoo shop. Politics? Not so much.

“I love this town,” said Whitehead. “But you just stay out of politics. If somebody comes in and starts talking about Walker, you just smile and nod and say, ‘OK.’ ”

Back at the cigar shop, people like Feia defend Walker, despite the reality that the state’s economic performance has not come close to matching the governor’s promises, nor kept up with the results across the river in Minnesota.

“It’s not right to compare Minnesota and Wisconsin,” Feia said. “It’s a different situation. We have all that old manufacturing that’s having a hard time. It’s more fair to compare Wisconsin with an area like the Iron Range in Minnesota. We have the same sort of struggles. I like Walker because I think he’s a good man at heart but that doesn’t necessarily mean he’d be my first choice. We’ll have to see.”

And even here, the one place where patrons agree to disagree, civility seems to rule. As Nick, the liberal, put out the remains of his cigar and prepared to head out into the smoke-free world around him, Feia offered a hand. He’d spray him with a product called Non-Scentz, which is typically is used to de-odorize smelly athletic gear, especially hockey gear (scientifically proven to be the ripest of all smelly sports equipment).

So the liberal stood and accepted the offer from the conservative.

“Just because we like cigars, doesn’t mean we have to smell like ’em when we leave here,” Feia said.  “We look out for each other.”

In Hudson, the talk of the town is anything but Scott Walker