The biggest political bogeyman of the last Minnesota election cycle has sleek, floor-to-ceiling windows, modern amenities and plenty of parking.

It goes by different names, depending on who you ask. Some Senate Democrats, who pushed to construct an all-new office building for themselves during and after the messy restoration of the state Capitol, call it the legislative office building. Republicans, who said the building was unnecessary, added the word “state” to the name so they could use the acronym “SLOB.” Some House Democrats, who saw the $90 million project turn into a potent campaign theme against them last fall, make sure to emphasize that it’s the Senate office building (not the House’s).

Whatever it’s called, the building is nearly ready for its public debut.

After more than a year of planning and construction, furniture will start arriving in the space next month, with an opening date slated for early next year. Sitting across the street from the Capitol’s north side, the new building will have offices for all 67 state senators and their staff, plus several large hearing rooms. One 250-seat room is more than double the size of any hearing room in the Capitol, while another will serve as the temporary Senate chambers next year as the restoration project is underway. Senators’ pictures already mark their dusty desks in the new chamber.

The three-story building will have restrooms on every floor (the Capitol will have no running water next year), as well as rooms for nursing mothers. A $13.6 million, 260-stall parking garage underneath the building will offer up some of the only parking on the Capitol campus for those with disabilities. Senators and staff will also park there for about $150 per month.

The building’s tall windows are designed to frame the state Capitol, with views of the 109-year-old building available from every floor. When the Capitol restoration is complete, the Senate building is meant to fit into a new, more public-friendly design for those visiting. It will offer easy access to the state Capitol building, public seating areas and phone chargers throughout. There’s also a plaza facing the Capitol for gatherings and rallies.

To stay within the budget for the project, some furniture from senator offices in the Capitol will be moved over to the building. And there’s no budget for art in the new building, so don’t expect to see anything like the giant (and sometimes controversial) murals in the Capitol.

“We were sensitive to the criticisms that it was going to be a ‘luxury office building,’” said project manager Vic Thorstenson during a recent tour of the building. 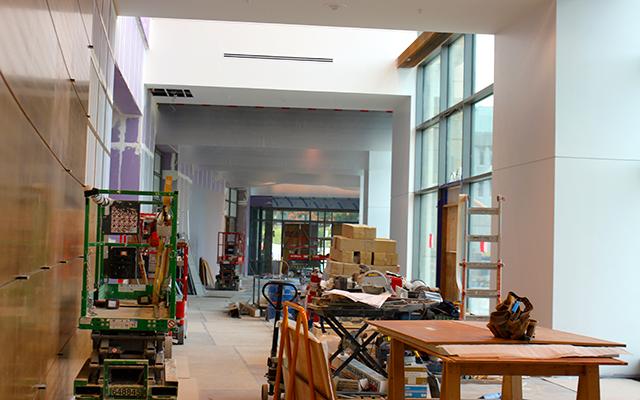 MinnPost photo by Briana Bierschbach
The ground floor of the building will have sweeping views facing the Capitol and public seating areas for visitors.

And Republicans maintain the building was never needed in the first place. “It absolutely was not necessary,” Hann said. “We all believed the Capitol restoration needed to be done, but there is no reason to believe that the restoration couldn’t have been done while still preserving the Senate space.” Hann said. Senators currently have offices in both the Capitol and the nearby State Office Building.

House Democrats, who had to approve the final designs of the building for senators, saw the project become a stand-in for tax-and-spend policies in the 2014 election. They lost the majority to Republicans last fall, who called the new building “luxury” in fliers in key rural districts.

Some of those fliers could be recycled in the 2016 election cycle. “We had to bring this project negatively to the Democrats in the House last fall, and it was a big part of the reason why voters thought the Democrats in the majority had lost touch with their constituents,” Hann said. “ The Senate majority has not had to face elections since they approved this project, as well as a host of other bad decisions.”

But time marches on: DFL senators have already started touring the building to claim office spaces. The process is based on seniority, so senators like Dick Cohen, who has served for nine terms, got to pick a slightly larger space near the offices of the chamber’s Finance Committee, which he chairs. Ten-term DFL Sen. LeRoy Stumpf picked a corner office with windows wrapping around two sides and a view of the Capitol (Thorstenson calls it the “terrarium” for how much sun will be streaming into the room at certain times of the day). 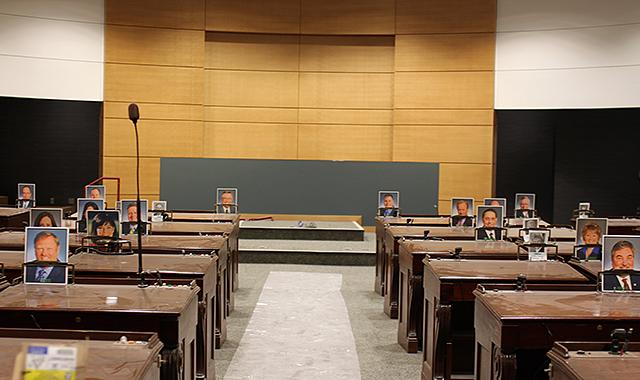 MinnPost photo by Briana Bierschbach
The temporary Senate chambers in the new building while the Capitol undergoes restoration.

It remains to be seen if and when Republicans will move over to the controversial space. Hann said they haven’t been asked to move yet, so his caucus hasn’t discussed it.

“Nobody has come to us and said we have to make a decision,” Hann said. “We are going to have more room than what we really need. We always thought this is not a good plan to build this building, but it’s done and I guess we are going to have this extra space. At this point we haven’t talked about it as a caucus.”