The dummy hanging by its neck from the boom of a logging truck was probably reason enough for Sigurd Olson to turn around and go home.

It was July 8, 1977, and tensions in northeastern Minnesota had reached a fever pitch over a proposal to carve out the Boundary Waters as a national wilderness area, cut off from motorboats, snowmobiles and logging and mining industries. Environmentalists like Olson wanted it preserved, but many loggers and boaters worried the proposal would choke out their livelihood.

Olson was in Ely for a field hearing on the proposal, where more than 1,000 people parked their trucks and cars and packed into an auditorium. He had become a poster child for the effort to preserve the Boundary Waters, and his name was pinned on the lynched dummy’s shirt, along with that of Miron “Bud” Heinselman, another well-known environmentalist.

As he stepped up to the podium to testify, the auditorium erupted in yells and boos. The jeers went on for minutes, despite calls from then-Rep. Bruce Vento — who chaired the hearing — for the crowd to quiet. At one point during the yelling, Vento asked an aide if there was a way out of the auditorium in case the crowd turned into a mob. Eventually, the audience quieted, and Olson delivered a brief statement.

“Some places should be preserved from development or exploitation for they satisfy a human need for solace, belonging and perspective. In the end we turn to nature in a frenzied chaotic world, there to find silence, oneness, wholeness, spiritual release,” Olson concluded. “Please make this statement a part of the record.”

The preservation of the Boundary Waters Canoe Area Wilderness (BWCAW) is still considered one of the most significant conservation acts in state history. It was also one of the most controversial, a fight that spanned more than a decade, toppled a U.S. Senate campaign and sharply divided communities and regions of the state.

Today, the clash is frequently cited by DFL Gov. Mark Dayton as his administration grapples with whether to grant PolyMet Mining Corporation a permit for a proposed copper-nickel mine near Hoyt Lakes. Like the ’70s Boundary Waters fight, the project has sharply divided a region desperate for jobs and environmentalists who worry the mine, situated near the Boundary Waters, could destroy the same wilderness they fought to preserve.

Dayton, who was just beginning his political career during the controversy, has said his agency’s decision on PolyMet could be “all that and worse,” likely resulting in years of litigation and political fallout. “This will be the most momentous, difficult and controversial decision I’ll make as governor.” 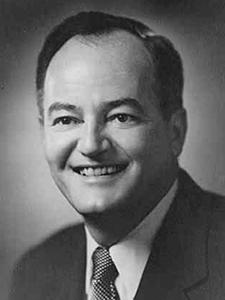 In 1956, Humphrey introduced the first version of what would become the Wilderness Act. After eight years and 66 rewrites, the final version of the act directed the secretary of the interior to review every roadless area of 5,000 or more acres within the National Wildlife Refuge and National Park Systems. The secretary would recommend to the president if it should be included in the National Wilderness Preservation System. The Boundary Waters was the only specific wilderness to get a mention in the bill — designated as an “instant wilderness” area that also allowed some logging and use of motors to continue.

The act was signed into law by President Lyndon Johnson in 1964, but the exceptions for motorboats and industry carved out in the bill touched off years of debates in northeastern Minnesota. In the early 1970s, various groups successfully sued to ban mining and logging in virgin forests in the wilderness, rulings that were later overturned.

In 1976, 8th District Rep. Jim Oberstar tried to resolve the ongoing disputes over the Boundary Waters by introducing a bill to create a 600,000-acre wilderness with no logging or motors and a nearly 400,000-acre recreation area. Environmentalists enlisted Minneapolis 5th District Rep. Don Fraser to introduce a competing bill to eliminate all recreation, logging and mining from the Boundary Waters.

The move pitted Democrats against Democrats and let loose long simmering tensions in the area. “In the towns located on the edge of the Boundary Waters, residents were aroused over attempts by ‘outside agitators’ to come in and dictate the use of the land,” reported a story in Sports Illustrated from 1977. “In Ely, the village sometimes called Canoe Town USA, bumper stickers appeared saying SIERRA CLUB KISS MY AXE. At one point, a Forest Service building was burned, tires were slashed on vehicles owned by pro-wilderness people and an outfitter who leaned toward the Fraser bill had the display window in his store broken a couple of times.”

Intense lobbying went on in Minnesota and in Washington, D.C., and editorials advocating both sides of the issue appeared in national publications. In order to resolve differences between the two bills, a U.S. House subcommittee held two field hearings in Minnesota in July of 1977. The first took place in St. Paul in a state Capitol hearing room, which was filled to capacity. 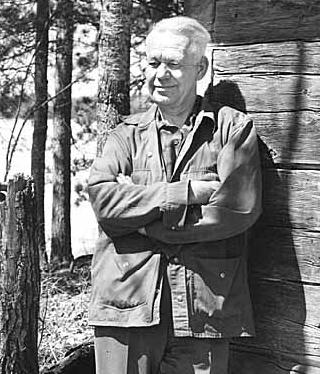 Courtesy of the Minnesota Historical Society
Sigurd Olson, circa 1960

The second hearing in Ely, where Olson and others were hung in effigy, is still talked about in the community today. Olson served as a wilderness guide in the lakes and forests of Ontario and Minnesota and was known as the “Bourgeois” — a term voyagers gave to their trusted leaders. He spent most of his life pushing for complete protection of the Boundary Waters. But that day in Ely, Olson was the controversial mascot for the environmentalist movement.

“Many threats have plagued the area over the years, road programs, power dams, airplane and fly-in resort developments, the acquisition of private land, logging and mining, and I realize now that had any of these issues been lost there would be no wilderness in the BWCA today,” Olson testified.

Debate on the two bills deadlocked, so a new proposal was drafted, this time sponsored by California Rep. Phillip Burton and Vento, a Democrat representing Minnesota’s 4th District. This version called for complete elimination of logging from the wilderness area, with some motor use. It took negotiations between Ely City Attorney Ron Walls and environmental attorney Chuck Dayton to reach a final deal, which eliminated logging and snowmobiling, restricted mining, and allowed motorboats on only one-fourth of the water area. The final agreement also increased the Boundary Waters wilderness by 50,000 acres, making the area more than 1 million acres of protected land. 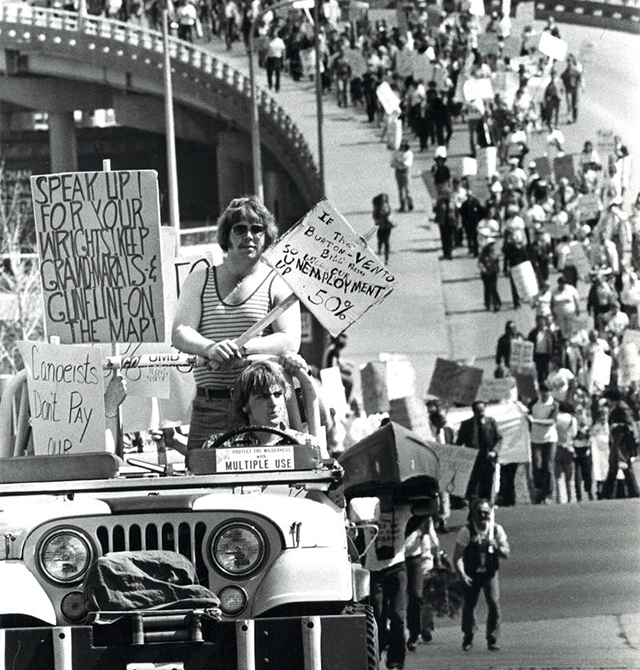 Courtesy of the Duluth News Tribune
From April 1978: Protesters head up Fifth Avenue West in Duluth on their way to the Federal Building to rally against efforts to further restrict motorboats and snowmobiles in the Boundary Waters.

The bill was signed on Oct. 21, 1978, by President Jimmy Carter, but hard feelings lingered long after the deal was inked.

And even before the bill was signed, the fight had political ramifications. In the 1978 election, Fraser attempted to move from the U.S. House into the Senate. He won the DFL Party’s endorsement, but he had a well-financed primary opponent in Bob Short, a businessman who had owned several sports teams. Short used his wealth to hit Fraser with negative ads in the 8th District, positioning himself on the side of northeastern Minnesota industry interests and portraying Fraser as a Twin Cities elitist. 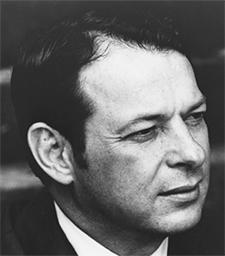 Courtesy of the Minnesota Historical Society
Don Fraser in 1973

“The folks on the Iron Range, they were workers and they were toiling and getting dirty and then there were those ‘elitists’ down in the cities who wanted to ride their canoes in the pristine Boundary Waters,” said Iric Nathanson, who served as a Fraser aide on his 1978 campaign. “I think that’s what made the fight so bitter up there. People felt they should be able to run their motorboats where they wanted to, and I think folks like Fraser misjudged how upset people were.”

On primary night Sept. 12, early returns from the Twin Cities showed Fraser in the lead. But in the early hours of the morning, as votes were tallied from the far-flung 8th District, Short eked out a narrow victory (Short would go on to lose the November general election to Republican David Durenberger).

Today, some Democrats worry about a similar political blowback from PolyMet. Last fall, Republican candidates — including gubernatorial candidate Jeff Johnson and congressional candidate Stewart Mills — tried to make inroads in the 8th District by declaring their support for mining.

Those arguments didn’t go far, though. Johnson and Mills both failed to take out incumbent Democrats last fall. And while Republicans in the Legislature made inroads in rural Minnesota, most of their victories weren’t in northeastern Minnesota. In one intra-party battle, well-funded Democrat Matt Entenza tried to defeat incumbent DFL State Auditor Rebecca Otto, partially by criticizing her in the 8th District over a vote against approving several mine leases. Otto decisively defeated Entenza.

“In political terms, the [Iron] Range doesn’t have the influence that it had in 1978,” said Nathanson, who pointed out that the population is dwindling in old mining towns. “If PolyMet is not permitted, quite a few people up on the Range are going to be very upset. But there are relatively few number of jobs that are being proposed.”

Iron Range blogger and longtime Democratic activist Aaron Brown said PolyMet involved many of the same people and groups that were involved in the wilderness debate. But the BWCAW battle also affected more than just mining, and it came at a time when the Iron Range was more prosperous. As the area has shed mining jobs, the region has weakened and is struggling with how to revive its fragile economy. PolyMet says the new copper-nickel mine would create several hundred jobs in the area, but environmentalists worry that the toxins created in the process could spill into nearby watersheds and linger for hundreds of years.

“The debate surrounding PolyMet is more about the region struggling with its identity in relation to mining and its economy in relation to mining,” Brown said. “It comes down to what you believe about the role of mining in our world and the role of wilderness in the world. There is some inherited legacy in the Wilderness Act, but now it comes with the emotional struggles and the industrialization of mining.”

For Dayton, the comparison boils down to emotion. He regularly recalls the arguments surrounding the creation of the BWCA, the firm convictions on both sides of the issue.

“I’ve seen the kind of extreme passions it arouses,” Dayton told MinnPost this summer. “If it’s not approved, the folks who are advocates will be pushing for it. And if it is approved, those who are opposed to it are going to take it to court and do everything they can to defeat it. It’s going to be with us for at least the next several years.”