The Minnesota chapter of the American Civil Liberties Union launched a new app Friday morning designed to make it easier for citizens to record interactions with cops — technology that some law enforcement representatives fear could escalate tensions between the public and police.

The app, “Mobile Justice MN,” allows users to record incidents, footage of which is sent directly to the ACLU as a means of preserving evidence. It also features a “witness function,” which alerts other users to an incident in progress and asks them to flock to the location.

“We’re experiencing a national moment in this country right now where communities all over the nation are demanding accountability,” said Teresa Nelson, legal director for the ACLU, at a press conference in St. Paul. “This app will add another layer to that accountability.”

The technology comes in the aftermath of high-profile incidents around the country, such as the deaths of Michael Brown and Freddie Gray during encounters with police. “I think it’s pretty clear that there have been some pretty serious issues of police misconduct in Minnesota and across the country,” said Nelson.

Yet some police officials in Minnesota have taken issue with the app, worrying that the witness function could do more harm than good, escalating situations by drawing crowds.

“If you create a crowd, it is possible that the crowd could turn on an officer,” said Andy Skoogman, spokesman for the Minnesota Chiefs of Police Association. “The mere presence of the crowd could easily make the officer feel intimidated which can quickly increase the tension of the interaction. We have seen such a scenario play out many times.”

A tool, not a solution

The ACLU released identical apps in several states last year. It will be available in 10 more states today. More than 250,000 people have already downloaded it nationwide, said Nelson. (MinnPost CEO Joel Kramer is on the Board of Directors of the ACLU of Minnesota; he had no involvement in this story.)

Using cell phones to record police isn’t a new concept. Many of the incidents that have captured national attention and inspired protests in recent years started with viral videos, such as the case of a Eric Garner, who died after being put in a chokehold by police in Staten Island in the summer of 2014. The app will simply streamline the process of recording these types of incidents and getting video into the hands of the ACLU’s attorneys, said Nelson.

The app, which is available starting today, allows a user to begin recording an incident with the tap of a button. Once the recording is completed, the file goes straight to the ACLU, where staff will review it for misconduct and retain it for a year. The user then has the option to file a report with the ACLU.

If there is suspicion of misconduct, ACLU staff will follow up with the sender, and the organization will determine the appropriate course of action. This could mean posting it to the Internet to increase public awareness or using it as evidence in a lawsuit, though Nelson noted the latter hasn’t happened in other states to date.

Nelson acknowledged video isn’t a cure-all — users could selectively film and not show full context of an incident — but it provides supplementary evidence to witness accounts and a powerful tool for citizens facing unfair treatment from law enforcement.

“The purpose of this is to empower people,” she said. “This puts the power in the hands of individuals, as opposed to video that’s captured by police.”

‘It will make the scene unsafe’

The Minneapolis and St. Paul police unions released a joint statement Friday criticizing the app, arguing the witness function “threatens public safety” by calling others to the scene. The app doesn’t send these other users a video, so witnesses wouldn’t have any context to the incident.

“Encouraging people to flock to an unsecure and possibly dangerous police incident is not responsible or logical. It will make the scene unsafe for citizens, victims, suspects and officers,” said St. Paul Police Federation Union President David Titus. “Some who use this app will not have the best intentions, adding unnecessary fuel to already combustible situations. The [ACLU] app may require a larger police presence to de-escalate some situations, an outcome neither law enforcement nor the community desire.” 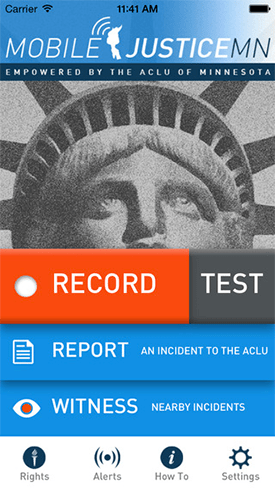 Nelson said no such issues have occurred in other states where people use the app, and she doesn’t “have any reason to believe that this will create any sort of a mob scene” here.

The Minneapolis police department wouldn’t comment on the specifics of the app, but spokesman John Elder said in a statement that officers are already accustomed to working under surveillance from cell phones and public or private cameras. He also noted that the city is in the process of rolling out a police body cam program, expected to begin early next year, which will provide more visual evidence of how police interact with the public. A St. Paul city spokesman said he’d just become aware of the app and offered no comment.

Skoogman, of the chiefs association, said he supports the advent of more video as a means of transparency and its ability to highlight the good work of officers. “From that standpoint, we welcome the new technology delivered thru this app,” he said.

But he also took issue with the rhetoric in launching the app, particularly the notion that user recordings are sent directly to the ACLU “so that it can’t be destroyed.”

“The implication is that law enforcement in Minnesota is currently destroying such evidence,” he said. “That is simply false.”

Nelson disagreed. She pointed to the case of Andrew Henderson, who Ramsey County sheriff’s deputies arrested in Little Canada three years ago after he taped them and paramedics detaining a drunk person. Henderson was charged with misdemeanors for disorderly conduct and interfering with an ambulance crew, but both counts were later dropped. The cops confiscated Henderson’s camera, and when he got it back, he said the footage had been erased.

Nelson also cited the 2008 Republican National Convention in St. Paul, during which officers seized cameras from several filmmakers and journalists. “It does happen,” she said.