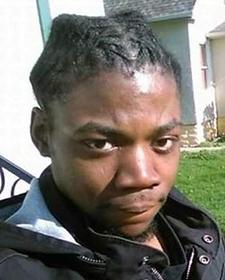 In the early morning hours of Sunday, Nov. 15 on the city’s North Side, a Minneapolis police officer shot a 24-year-old man named Jamar Clark in the head.

In the weeks since, the incident has made national headlines, led to state and federal investigations and inspired a protest that shut down one of the busiest highways in the state, resulting in dozens of arrests.

On the night of Monday, Nov. 23,  suspects shot five protestors about a block from the Fourth Precinct police station.

Here’s what we know so far — and what we don’t — about what happened:

Was anyone killed at the protest shooting Monday?
No. All injuries were non-life threatening, according to police. Two of the victims were transferred to Hennepin County Medical Center via ambulance and the other three were brought to North Memorial Medical Center by a private vehicle.

According to the charging document — read in full here — in the days prior the shooting, the men posted videos to social media using derogatory terms to describe black people and declaring their intentions to do some “reverse cultural enriching.” The men went to the protest and Scarsella shot five people. A few hours later, an acquaintance of Scarsella, who worked as a police officer in another jurisdiction, told Minneapolis police that Scarsella had called him earlier and admitted to shooting five people. “The officer was aware that Scarsella owned and carried guns and that he had very intense opinions, which the officer described as being a sovereign citizen and pro-Constitution,” the complaint says. “He knew that Scarsella had negative experiences with and opinions about African Americans.” The officers raided Scarsella’s home that night. On his phone, they found several incriminating texts between him and the other suspects, as well as photos of Scarsella with guns and a Confederate flag. Police arrested all four men last week and they’ve all confessed to being present at the during the shooting incident.

The men haven’t been charged with a bias crime, often known as a “hate crime,” which many activists called for last week. However, based on Minnesota laws, that would be mostly a symbolic charge. Read more here.

How did this whole thing start?
Shortly after midnight on Nov. 15, two Minneapolis police officers responded to a call for assistance from paramedics reporting a man interfering with their ability to help an assault victim. The officers arrived at the scene, on the 1600 block of Plymouth Avenue North, and got into an altercation with Jamar Clark, who was a suspect in the assault. In the course of this encounter, one of the officers shot Clark. The incident began a protest that is still ongoing, even after this week’s shooting.

Was Clark handcuffed when the officer shot him?
This is in dispute. Minneapolis Police Chief Janeé Harteau and other law enforcement representatives say he was not. However, some witness accounts say otherwise. Black Lives Matter posted a video recently the group says shows Clark on the ground in handcuffs just after he was shot, but the footage is dark and it’s difficult to make out exactly what’s happening. Gov. Mark Dayton viewed separate footage from an ambulance on scene, but told reporters “it doesn’t show anything that would be any confirmation of one point of view or another.”

Did Clark die as a result of his wounds?
Yes. He died on Nov. 16, the night after he was shot, and his body was taken to the Hennepin County Medical Examiner for an autopsy.

What do we know about the officers involved?
The BCA released their names on Nov. 18: Officers Mark Ringgenberg and Dustin Schwarze. Both have been police officers for seven years, and both have been with the Minneapolis Police Department for a little more than a year. Schwarze has faced two internal affairs complaints in his time on the force. One was dismissed with no discipline earlier this year; the other is still open. Police won’t release any details on the nature of the complaints. Ringgenber has not had any complaints during his time with Minneapolis police.

Is there more video?
Yes. The Bureau of Criminal Apprehension acknowledged that more footage of the incident exists, including from bystanders, a police mobile video station and a public housing building. None captured the incident in full, so it’s yet to be seen exactly what the video will show. Minnesota Public Radio has posted audio from the BCA press conference.

Why is there no police body camera footage?
The officers weren’t wearing them. The Minneapolis Police Department hasn’t officially rolled out its body camera program yet, though it expects to in early 2016. The department did run a pilot project, but it ended earlier this year. 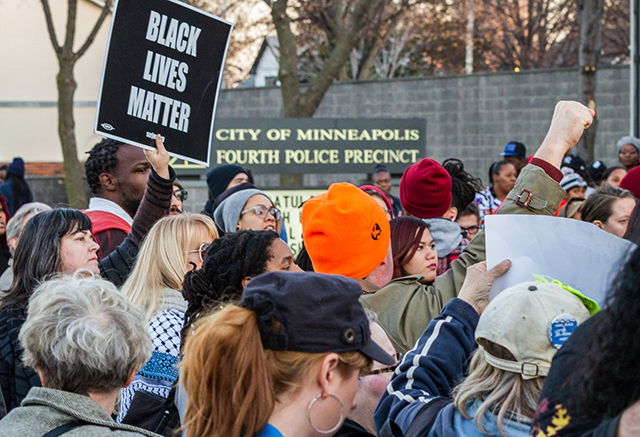 How have critics responded?
Black Lives Matter and others assembled promptly after reports of the shooting and camped outside the MPD’s Fourth Precinct station. On Nov. 16 the group issued a “list of demands,” including that police release footage of the incident, which the protestors believe will confirm Clark was handcuffed during the incident. The group also asked for an independent investigation into the shooting, saying the state’s Bureau of Criminal Apprehension wasn’t capable of being impartial. The day after the incident, hundreds of protestors took the streets and blocked westbound traffic on I-94. Police arrested 51 people on various minor charges. Police cleared out an encampment early December 3.

What’s been the response of city officials?
Mayor Betsy Hodges held a press conference the night after the initial incident with several other city leaders, where she announced the city had asked the federal Department of Justice for an independent civil rights investigation, which will take place in concurrence with the state’s BCA investigation. In her letter, Hodges said she and Harteau have “utmost faith” that the BCA can conduct a proper investigation, but “believe it assists the interests of transparency and community confidence” to have the DOJ step in too. Harteau added that the investigations aren’t a predetermination of guilt of the officers, but “everyone involved needs and deserves the truth and the facts.”

On November 30, after two weeks of protests, Hodges and Congressman Keith Ellison asked occupiers to vacate the Fourth Precinct site, saying the demonstration has become unsafe and disruptive to the community. “It’s time to evolve this beyond the encampment for the sake of the people we say we’re trying to help,” said Ellison.

What will be the DOJ’s role?
The DOJ agreed to take the case on Nov. 17. The federal agency will make determinations on the case independent from the state, says Mark Osler, former assistant U.S. Attorney. The department also brings investigators with national experience in these types of cases, which the state doesn’t have. If the DOJ does find criminal wrongdoing, the officers could potentially face federal charges (though, as FiveThirtyEight points out, that’s proven to be historically rare). But that’s not the only possible outcome, says Osler. Another would be issuing a report identifying problems in the system and making recommendations to prevent similar incidents from happening in the future. 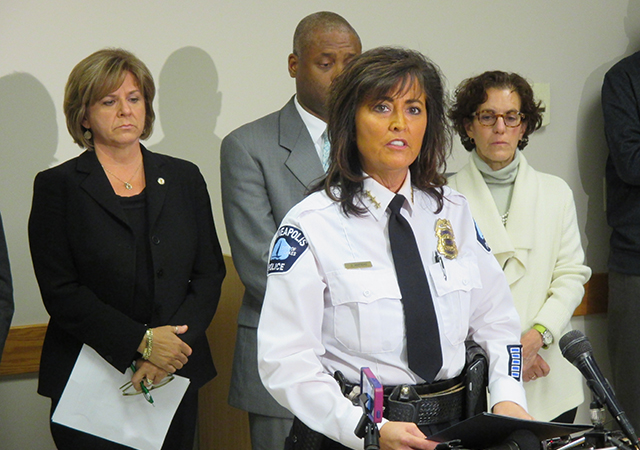 MinnPost photo by Peter Callaghan
Minneapolis Police Chief Janeé Harteau stated at a Nov. 16 press conference that the BCA investigations aren’t a predetermination of guilt of the officers, but “everyone involved needs and deserves the truth and the facts.”

Was this Jamar Clark’s first encounter with police?
No. Clark has faced several criminal charges in the past. He was convicted of first-degree aggravated robbery in 2010 and terroristic threats-reckless disregard risk earlier this year, both felonies. In an interview with KARE-11, Clark’s brother said Jamar was “trying to get his life back together.”

How often do Minnesota police officers fatally shoot suspects?
Between 1994 and 2014, 115 people died in police shootings, according to data reported by the Bureau of Criminal Apprehension (though the Pioneer Press recently pointed out that this dataset may be incomplete). The deadliest years over that 20-year period were 2009 and 2010, with 11 officer-related shootings each year. In 2014, seven people died in police shootings, according to the data.

So why is this one getting so much more attention?
Partly due to the circumstances, but also because of the response from groups like Black Lives Matter. Many community leaders have likened the event to others around the country involving black victims, such as the case in Ferguson, Missouri, in which a white officer shot an unarmed black man.

Why haven’t we seen the videos?
Investigators haven’t released them yet. As the Minnesota Coalition on Government Information points out, any video obtained by police falls under confidential investigative data,” which authorities don’t have to release.  That doesn’t mean we won’t see the footage eventually. When the investigation ends, the videos will automatically become public. Authorities could potentially release the videos earlier under data laws if they believe it will “aid with the law enforcement process, promote public safety, or dispel widespread rumor or unrest.”

Had the protests turned violent prior to the shooting Monday?
Before the shootings this week, the protests were mostly peaceful, but there were some reports of violence. Harteau said in a press conference on Nov. 19 that some demonstrators had thrown bottles, rocks, bricks and Molotov cocktails at officers and squad cars, causing serious damage to 12 police vehicles, two portable cameras and the Fourth Precinct building. There was also a report of shots fired near the protest site. In response, police have used measures like chemical irritant spray and non-lethal marking rounds, which are supposed to identify agitators. Some protestors have alleged further abuse by the police. Nekima Levy-Pounds, president of the NAACP, said that cops beat up two women in an alley. Levy-Pounds said there was video of the incident, though none has come to light so far.

Has Clark’s family responded to all of this?
After the shooting Monday, Clark’s brother released a statement asking protestors to clear our for their own safety. Previously, Clark’s sister, Javille Burns, criticized protestors who have been destructive in a sit-down interview with KARE-11. “Violence begets violence,” she said. “I do not condone the people doing anything to hurt anybody, to destroy property — any of those things are not getting our message across, period.” She said the officer who shot her brother should be “tried and convicted as a murderer.”

This story was originally published on Wednesday, Nov. 18. It was updated on Tuesday, Nov. 24.

Updated: What we know about the shooting of five protesters and the Jamar Clark investigation