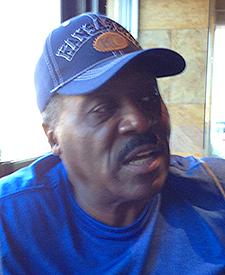 Harry “Spike” Moss is 70 years old and claims that he is retired from a life of civil-rights activism.

It’s true that he makes the retired man’s trek around Lake Calhoun several times a month; that he’s a regular at his gym; and that he gets teary-eyed when he talks about the hard lives of his ancestors.

But his is a strange sort of a retirement. In reality, Moss’ life is little different from the days when he collected a paycheck for his work with troubled youth at City Inc., or his work at The Way (nonprofits that both eventually saw their funding dry up, leaving Moss on the outside).

Even then, it was always impossible to separate Moss, the paid worker, and Moss, the ubiquitous — and voluable — Minneapolis presence, someone who spent most weekends visiting prisoners and most nights attending community meetings or mourning with families who had lost a child to violence.

And that doesn’t seem to have changed much. On Monday afternoon, Moss was on his way to a meeting with Minneapolis Police Chief Janeé Harteau, but he had little hope that he would hear something that would give him comfort in the wake of the shooting of 24-year-old Jamar Clark by police early Sunday morning.

“The powers that be haven’t changed at all,” Moss said. “And we keep suffering.”

The paths of police and Clark crossed when police were called to the north Minneapolis location where Clark allegedly had assaulted his girlfriend. But stories diverge wildly about what happened after police arrived. Witnesses claim Clark was handcuffed before being shot. Harteau has said that he was not in handcuffs.

But Moss finds the debate beside the point.

“My take is this,’’ said Moss. “If he breaks the law, arrest him. But the police cannot be the judge, jury and executioner. The young man did not have a knife, he did not have a gun. Why did they shoot him? How can that be explained?”

This recent episode isn’t what stirred Moss to return to the streets, mostly because he’s never really left them. Along with Billy Russell, senior pastor at Greater Friendship Missionary Baptist Church in Minneapolis, Moss recently started an organization called “One Love Movement.”

He says these things about jobs and education while also insisting that nothing has really changed in his lifetime. If anything, times never have been so bad, so violent, so hopeless, for the poor in the black community, he says.

“You have to spend eight months looking for a job, but you can find a 9 millimeter [handgun] in eight minutes,” Moss said.  “Every negative is available. Everything worthwhile is unavailable.”

There is one difference between now and “back then,” in the 1980s and ’90s, when Moss frequently was vilified for being the angry black man stirring up trouble. “Now there is documentation,” said Moss. “Now there are all these reports and statistics.”

Moss was referring to a drumbeat of reports that show Minnesota’s is the worst — or among the worst — states in the country for black employment, black wages, black education and black housing.

‘I don’t see the agenda’

Moss is well aware of both the value and pitfalls of being provocative. And as he watches a new generation of black leaders behind the Black Lives Matter movement, he’s perplexed.

“I don’t see the agenda,” Moss said. “An agenda is more than just laying down in a street somewhere. You have to have something to take to the powers that be. I don’t see them (Black Lives Matter leaders) talking to the black ministers. It sometimes seems like they really don’t want anything to do with the black community.”

It’s another organization, Minnesotans for a Fair Economy, that is more impressive to Moss. (The group — a coalition of labor, community and faith organizations — is pushing for a $15 minimum wage in Minneapolis.)

Much of what Moss sees today is little different from what he saw as a child in the place of his birth, Paris, Missouri.

But once in a while, old stories take surprising twists. For example, the University of Missouri saga that unfolded in recent days had one element that’s been a constant. The university’s president tried to hold on to his job by claiming that his administration was going to unveil a plan “in April’’ to help calm racial tensions at his school.

“We’ve been hearing that for 400 years,” said Moss, contemptuously. “We’ve been hearing ‘we want to help, really, but this is complex, it takes time.’ You mean, 400 years isn’t enough time? When I heard that line ‘in April, we’ll have a plan’ I couldn’t help but laugh.”

But sometimes events still mange to surprise him. In the Mizzou case, black members of the school’s football team said they’d boycott games until the president stepped down. Their white coach supported them.

Suddenly, the black students at Missouri didn’t just have a plea for justice on their side. They had economic clout. If the Missouri football team had not played its next game, it would have cost the school $1 million. The president stepped down.

The surprising element to Moss in this was the participation of the black athletes. In his experience, athletes almost always avoid political confrontation.

“Ninety percent of the athletes I’ve known are tone deaf to what’s going on,” Moss said. “Most just do what they’re told and ignore what’s going on around them. These young men stood up and did the right thing. Maybe it will show others what happens when they stand together.”

But most things are predictable, he said. He remembers being brought up on “The Story of Little Black Sambo,” a children’s tale that traded on racist caricatures but that eventually disappeared from schools and libraries. But just as “Little Black Sambo” goes away, Moss said, the Minneapolis school district purchases a children’s book with a little black girl on the cover, “Lazy Lucy,” that was to be a part of the curriculum. (In the face of community outrage, the district reversed course and ended its relationship with Reading Horizons, the Utah-based provider.)

And there are still those cases of violence that, to Moss’ way of thinking, prove our culture has changed little over the generations. “We’ve got a woman, enjoying dinner with her family,” he said. “They’re all speaking in their native language and having a nice time. All of a sudden, the woman gets her face beat in by somebody with a beer mug.” (Jodie Burchard-Risch has been charged with third-degree assault for her attack on Asma Jama at a suburban Applebee’s.)

He calls what he sees around him “American apartheid.” Still, the “One Love Movement” is about something bigger than that reality. “We understand, if you’re oppressed, you’ll do crazy stuff,” Moss said. “But murder is still murder, selling drugs to people is another form of murder. We have to be out there, talking to young people, telling them gangs are not the way.”

But the violence among young black men is only a part of a bigger problem, a problem underscored by police shooting a young man early Sunday morning. “This has been going on and on and nothing has changed,’’ he said. “There has to be accountability.’’

The vindication of Spike Moss?