They might not be the most important real estate sites in Minneapolis and St. Paul, though they may attract the most notice.

This year, once again, MinnPost took a look at six of the most conspicuously underused parcels of land in the Twin Cities: sites located along well-traveled streets or that make appearances in the news but that have, so far, not attracted development plans, remaining mostly unused.

Will anything ever be built there? This year, the answers range from “definitely” to “very likely yes” to “maybe … eventually.”

The project: 100 Hennepin (aka the ‘lumbersexual’ building)

The location: Just south of the Hennepin Avenue Bridge, Minneapolis

This prominent parcel of land, which sits between Whole Foods and the Minneapolis Federal Reserve near the Mississippi River, is already showing signs of a makeover: a few dozen prominent trees removed and workers currently removing the asphalt from a longtime surface parking lot. (The property had once held the Pence Opera House, which was demolished in 1952.)

Taking their place will be a two-building project to be constructed on either side of a rather homely parking ramp (even by parking ramp standards). Along Hennepin will rise an six-story apartment complex of 179 units that will be attached to that ramp. The apartments at street level will be two-story live-work units. That building will also have a small retail space and a coffee shop on 1st Street. On North 1st Avenue will be a group of 13 walk-up town homes with parking tucked beneath. The project is owned by Shorenstein of San Francisco and being developed and built by Ryan Companies.

At a meeting of North Loop community group 2020 Partners, Carl Runck, director of development for Ryan, said the architects have decided on the design theme “lumbersexual” or “what’s cool about the North Loop.” The move-in date for the apartments is January 2017.

The Farmers Market is just one parcel among many in this hard-to-find and harder-to-get-to part of the city: a light-industrial area between Target Field and I-94. The city owns the market sheds as well as two other large parcels used by the city transportation department and public works. Other parcels are privately owned.

But this neglected part of the city has received renewed attention from several different directions. The city recently awarded a contract to Urban Works to conduct a site analysis and develop a new vision for the market. The analysis could suggest improving the current market, expanding it or relocating it “to help catalyze economic development in the area, to create an expanded food and entertainment venue and to develop a civic landmark,” according to the request for proposals. The city and vendors both have hopes for creating a year-round farmers market. 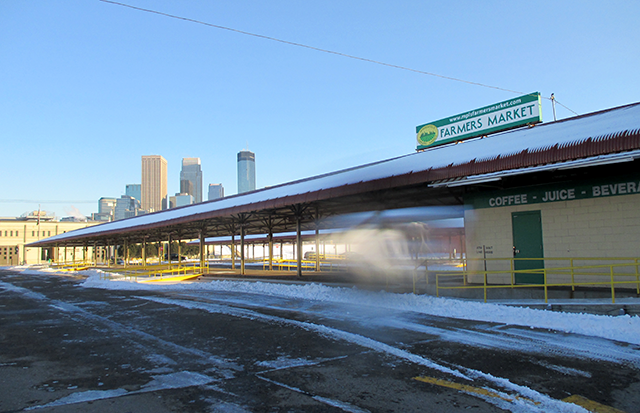 The area was the subject of a previous analysis by Urban Works which dubbed the neighborhood the West Loop and designated it at “Minneapolis’ Next Great Neighborhood.” It is already served by both Metro Transit light rail lines and — should the Southwest Light Rail Transit project be funded and built — will be home to a station on Royalston Street.

David Frank, the city’s economic development director, said the city and the market “need to have an opinion” when development happens around it and hopes to have that opinion informed by the Urban Works study. Frank said redevelopment of the market area isn’t a question of if, but when. He said he believes that once developers are certain SWLRT will happen, development proposals will begin appearing.

One thing that won’t be located in the area is a stadium for the Minnesota United, which is set to join Major League Soccer in 2017 or 2018. While team owners would have preferred to build a stadium in the area — they had purchase options for land near the market — they let those options expire and are now focused on a site at I-94 and Snelling in St. Paul.

The developer of this site, Alatus, unveiled renderings of a proposed residential tower in October. It has not yet announced whether the building would hold apartments or condominiums, but has told neighborhood groups that it would hold up to 210 condos or 280 apartments above a three-story podium for parking and commercial space — likely a restaurant and perhaps a fitness center, said senior project associate Chris Osmundson. There would also be parking below grade.

Should Alatus opt for condos, it would be a significant break from recent development trends in Minneapolis, where developers have been almost exclusively building apartments in recent years, partly to serve a growing market and partly to avoid the financial and legal headaches facing condo construction. But when Alatus principal Bob Lux was asked during a Ward 7 development forum to make a prediction for 2016 he said there would soon be an announcement of a 35-40 story condo project in Minneapolis.

Osmundson said he thinks the Twin Cities market is ready for more condos and that the company has told neighborhood groups that prefer condos over rentals that it would do all it could to meet that request.

The Washburn-McReavy project has gone through several iterations, but Osmundson said Alatus expects construction to begin by summer. 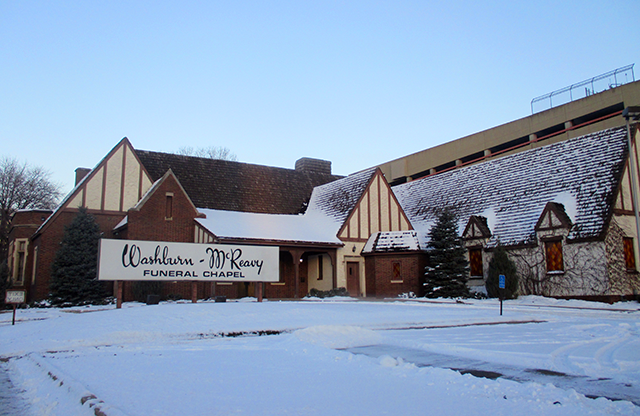 Complicating the project is its location within the St. Anthony Falls Historic District, which has design guidelines for new development, including a preference for mid-rise buildings. Those guidelines were used to persuade Schafer Richardson to recast its high-rise residential tower that was planned for the Nye’s restaurant property to a mid-rise tower that preserves two historic buildings on Hennepin Avenue.

Preserve Minneapolis, the group that opposed the original Nye’s plan, is now opposing the Alatus proposal for the Washburn-McReavy site.

“These designs propose not just density but especially high density of a size and design that is not close to fitting the existing guidelines for an area that is beloved specifically for its historic character,” the historic preservation group said. The project has been endorsed, however, by the Nicollet Island East Bank Neighborhood Association.

The two properties that would be demolished to make way for the tower are the Washburn-McReavy funeral home and the St. Anthony Athletic Club. The funeral home dates to 1929 and first held the St. Anthony Men’s Commercial Club. The athletic club was built in the 1960s and hosts one of the state’s less-prominent sports museums, the Minnesota Racquetball Hall of Fame.

The latest plans for the parcel on the southeastern corner of downtown might possibly check every box on the urbanist wish list: dense development on what is now predominantly surface parking; a new downtown headquarters for 300 Kraus-Anderson Construction Co. employees; a 17-story apartment tower; a restaurant; a bar; a park (actually a “woonerf” between buildings);  and … a brewtel.

What’s a Brewtel? That would be the physical manifestation of a plan by socially conscious brewer Finnegans (it gives profits to food banks) to build a brewing operation that includes a tap room and what it calls its Finnovation Lab — an incubator for start-ups with a similar social mission as Finnegans. Oh, and it will also be part of a 148-room boutique hotel, so a brewtel. 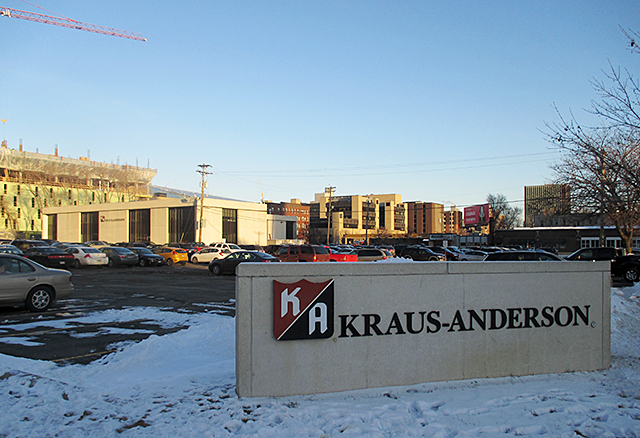 The construction company currently occupies a small, two-story, ’70s era office building on the southwest edge of downtown, with parking lots covering three-quarters of the lot. Across the street is a condominium project that Jim Stanton’s Shamrock Development is building plus the existing Hyatt Place Hotel. The new U.S. Bank Stadium sits a few blocks northeast.

Kraus-Anderson, in need of a new headquarters, figured it could be part of a much broader redevelopment effort in an area increasing in value and importance to downtown Minneapolis. The issue was how fast. Michael Korsh, vice president of Kraus-Anderson Realty Co., said initial plans were for the new headquarters to be followed by development of the rest of the parcel, but the city wanted the plans accelerated. So beginning in April, construction will start on the five-story headquarters, a 17-story apartment building with 300 units and the Finnegans brewtel. Estimates of the total value of the plan is $175 million.

“All the pieces appear to be in place and everyone is pretty excited,” Korsh said. “It’s gonna look a lot different in a few years.”

If they unbuild it, will they come? After having failed to interest developers in a reuse of the hulking structures that line the bluff between downtown and the Mississippi River, Ramsey County decided to take a chance. If it fronted the $13.5 million cost of demolishing seven buildings constructed between 1886 and 1979 and to build a massive retaining wall, would it be enough to entice developers into investing in the 3.88 acres of land with unobstructed river views? The county is betting it will. Demolition of the former West Publishing buildings — more recently used for county offices — and a former county jail began in June, and should be finished this summer. 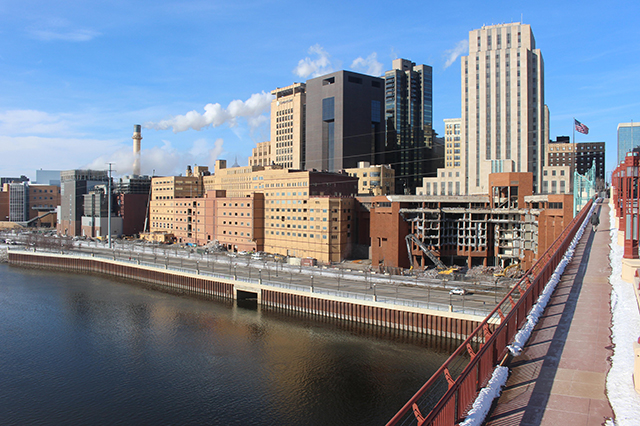 By spring, county staff expects to present the Ramsey County Commission with a request for proposals for a master developer of the project. The property is zoned mixed-use and project planners hope for residential, ground-level retail and commercial and possibly a hotel.

Known as the Riverfront Properties, the redevelopment could also further a dream of the City of St. Paul. Any development agreement is likely to require buildings that help create the River Balcony, a concourse that would hug the side of the bluff from the Science Museum of Minnesota to Union Depot. The first link in the linear pedestrian parkway will be in the Custom House, which is set to become apartments and a hotel. Exeter Group is designing the project to tie into the balcony.

The location: Across street from Xcel Energy Center, St. Paul

What is now a massive surface parking lot would become a new gateway to downtown if pending agreements between the city, Opus Development Co. and Greco LLC are completed. The lot is in a good location: across W. 7th Street from the Xcel Energy Center. In one direction is the heart of downtown. In the other is a retail and restaurant strip getting a boost from another Opus project — apartments and a hotel — at the former Seven Corners Hardware site.

According to a tentative developer agreement, Opus and Greco have until April to meet planning benchmarks. The partners have already announced a hotelier, Carlson Rezidor, which plans to locate there an edition of a new hotel brand, Radisson Red, with 150 rooms. The site could also include residential uses as well as retail. 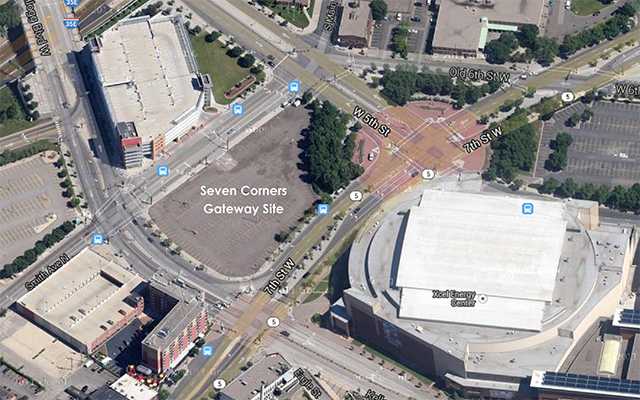 Given its location — at one of the city’s entry points and in proximity to the home of the Minnesota Wild hockey team — the project also calls for a large public plaza surrounded by stores and restaurants. If the Opus-Greco plan succeeds, it will end a nearly two-decade effort to get something other than cars on the 2.4 acre site.