At least transit planners believe it’s real. And there’s research to suggest that many potential transit riders who rarely ride buses would happily board a streetcar or light rail train.

So how does Metro Transit attract rail snobs without building more rails? By featuring buses that borrow some of the perceived advantages of rail — at a fraction of the cost.

The Twin Cities’ first arterial version of Bus Rapid Transit, or BRT, is set to begin passenger service on June 11, Met Council Chair Adam Duininck announced Thursday. The A Line route will begin at Rosedale, pass through St. Paul via Snelling Avenue and Ford Parkway and end in Minneapolis at the 46th Street light rail station.

That’s 10 miles and 20 stations at a cost of $27 million, a figure that includes 12 new BRT buses. In contrast, the proposed 13-mile extension of the Blue Line light rail, from Target Field to Brooklyn Park, is expected to cost $1.5 billion. Apples to oranges, perhaps, but illustrative.

“There are two things we’re trying to offer,” with the A Line, said Charles Carlson, senior manager for transitway development at Metro Transit. “One, a faster trip and two, a more-comfortable trip.”

Across the country, the mass transit debate often comes down to modes, i.e. BRT vs. streetcars vs. light rail. In the Twin Cities region, it is possible that all three could each carry some of the rapid transit load, with the debate being over which mode to use on which corridor. Arterial BRT is being aimed at high-traffic corridors where there are already lots of riders but where streets are too narrow or the area too developed to make light rail a good fit. In transpo-speak, BRT offers a “context-sensitive solution.”

A few miles from the A Line corridor, for example, is an alignment that had once been in the queue to become the second BRT service: the B Line. (Arterial BRT routes are designated by letters while highway BRT lines will use colors, e.g. the Red Line from Mall of America to Apple Valley.) But the B Line is on hold while the corridor undergoes a Ramsey County Regional Rail Authority study on the option of using light rail between Union Depot and the airport. Even that conversation has morphed into whether some sort of streetcar/light rail hybrid might lessen the impact of the project on parking and traffic lanes on West 7th Street.

Metro Transit would like to build 11 BRT alignments on its most heavily traveled corridors by 2030. Taken together, those corridors now carry half of the region’s local transit riders. The proposed C Line would run along Penn Avenue in north Minneapolis and provide connections to both of the region’s ongoing light rail lines before heading into downtown; that project is projected to go into the engineering phase sometime this spring. The D Line would trace the No. 5 bus route, from Mall of America through southeast Minneapolis to downtown Minneapolis.

Planners say that BRT is significantly faster than regular buses, thanks in part to borrowing characteristics of light rail. The stops are more spread out — every half mile on average rather than every few blocks — meaning less time spent stopping for passengers. And fares are paid at the stations, not on board, and enforced by random checks by transit cops, as on light rail trains. 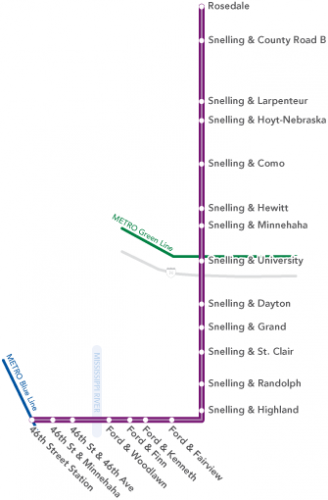 Metro Transit
The A Line route

Moreover, because fares aren’t collected by the driver, both the wider front and back doors can be used for boarding and exiting the buses. The buses also have lower floors that match up more closely with the raised platforms at the stations, many of which are built so that the buses don’t have to leave the traffic lane to pull into stations.

Importantly, the A Line BRT buses will have signal priority at 20 intersections. That doesn’t mean the buses get automatic green lights — that’s known as signal preemption — but it’s close. A BRT bus sends a signal to the computer at the intersection requesting an earlier green light or an extension of a light that is already green. The computer decides whether to grant the request. Says Carlson: “We may get some red lights, but they will be shorter.”

How much will all this do for travel speed? Carlson said planners expect the A Line to complete its route 20 percent faster than existing buses. In minutes, that means the 30-40-minute travel time from end to end could be cut by up to eight minutes. Is that worth $27 million? Metro Transit projects 8,000 average daily riders by 2030, compared to the 4,000 that ride the route now. (Those slower local buses will continue to run, stopping at all of the bus stops but with less-frequent service once the A Line starts service.)

One thing the A Line and other arterial BRT lines in the Twin Cities will not have: a dedicated lane. Despite the fact that the feature is usually a hallmark of BRT, taking over traffic lane — or even a parking lane — on Snelling or Ford Parkway would likely have drawn neighborhood opposition. And Metro Transit makes the case that it wouldn’t have sped up service significantly, since most of the increased speed comes from the design elements that are being used on the A Line. “Most of the delay on bus routes is stopping at red lights and waiting for passengers to get on and off,” Carlson said during a media preview of the system Wednesday.

The new BRT stations will not only let the buses stay in traffic lanes, it creates more room for station improvements. The stops built for the A Line will have heated shelters, security cameras and emergency phones. They’ll also have ticketing machines similar to those at light rail stations and real-time information displays.

More bang for the buck?

The A Line is one of 27 completed or under construction bus rapid transit systems in the United States. Twenty more are in the planning stages.

And because they are easier and faster to put into place, they are also easier to decommission should the needs — or the finances — of a transit system change. That has led some experts to question their economic-development oomph because developers feel more secure with the high investment and more-permanent infrastructure of light rail and streetcar.

Yet a study conducted by two University of Utah researchers found that BRT does bring measurable economic development benefits.

“We find substantial though often circumstantial evidence that bus rapid transit systems can influence development patterns in important ways,” wrote Arthur C. Nelson and Joanna Ganning. “We conclude that, on the whole, BRT systems are associated with positive development and job location outcomes, though not necessarily population or housing outcomes.”

The corridor includes several of the areas that St. Paul has high hopes for in terms of redevelopment. It passes by the 125-acre former Ford plant that is in the planning stages for a massive, mixed-use development, as well as the intersection of Snelling and University Avenues — the site of a proposed Major League Soccer stadium and a related redevelopment of the existing RK Midway shopping center.