It was 2004, and there was some heavy lifting to do at my neighborhood caucus.

After all, we had to decide who should be the Democratic Party’s candidate to take on the incumbent president, George W. Bush. Top contenders were John Kerry, Howard Dean, Joseph Lieberman, Dennis Kucinich and — up until about five minutes before the caucuses began —John Edwards. (Edwards, whose dark side had not yet been revealed, surprised his substantial Minnesota base of support by dropping out of the race late in the afternoon of caucus day.)

After a flurry of activity to get everybody into the right room, the meeting began. Most of us were tired, sweaty from wearing winter gear into a warm building and looking pale from the fluorescent lighting. But we were there because we felt it was — and is — our civic duty.

Soon enough, a woman stood, cleared her throat, and said she had a resolution to present to the body.

We leaned forward, anxious to hear what this first resolution of the night would be. Opposition to the war in Iraq? A call for universal health care? A demand for equal pay for women?

“I have a resolution that would prohibit smoking at bowling alleys,” the woman said.

I had always thought caucuses were supposed to be mini town-hall meetings, places where the serious issues of the day are discussed among neighbors. It’s a nice theory — one that caucus virgins may share as they contemplate participating in Tuesday night’s contest, the most closely watched Minnesota caucus in recent memory.

And yet, I suspect many Minnesotans may emerge with frustrations similar to those I’ve experienced over the years. They will stumble out of these meetings disappointed, disgusted and vowing never to return again.

So before you head off to your caucus tonight, you should be prepared for you’re really getting yourself into. Democracy is rarely pretty, but caucuses can be downright ugly. Here’s what you need to know to tolerate – any maybe even embrace – the experience. Don’t say we didn’t warn you.

1. Your caucus isn’t going to be a forum for high-minded debate.
In 2008, a record numbers of Minnesotans — more than 220,000 people — turned out for the state’s Democratic caucuses to vote for either Barack Obama or Hillary Clinton. On the same night, more than 60,000 Republicans came out to select a candidate from a list of choices that included Mitt Romney, Mike Huckabee, Ron Paul and Alan Keyes.

Neither party was prepared for the onslaught. There were traffic jams outside caucus sites and long lines inside. There were more people than ballots. Discussions? Hardly, unless people yelling “Where am I supposed to go?” can be considered discussion. As the people kept coming, hardy party volunteers were slowly consumed by chaos.

At my caucus site, I ended up in some room with a lot of other people. I finally got a chance to scrawl a name on a piece of paper somebody had ripped from a spiral notebook. I turned the paper over to somebody who looked like an official.

This year, it may be the GOP’s turn, as record numbers of Republicans are expected to head to the party’s caucuses. And though there probably won’t be record numbers of Democrats, there will still be a lot. “We’re prepared for as large of turnout — if not larger — than 2008,” said Ken Martin, the DFL’s party chairman. Keith Downey, chairman of the GOP, says his party also is prepared for any and all comers. 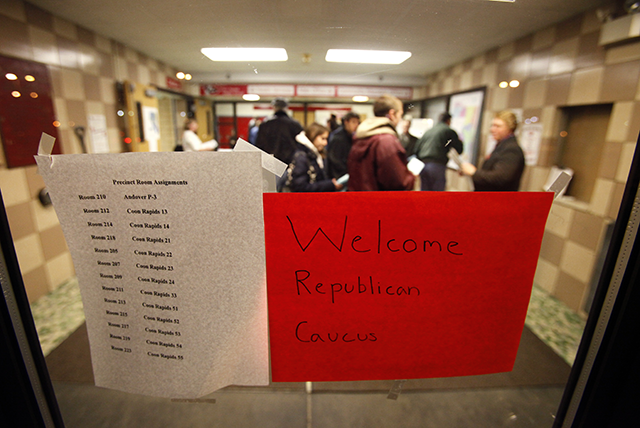 2. Your caucus is going to make you wish Minnesota held a presidential primary.
The majority of states have decided that it’s better to have the clarity of primaries as opposed to the chaos of caucuses. Downey, Martin and Secretary of State Steve Simon all say they see the benefits of primaries.

For one thing, primaries offer the opportunity for absentee voting. Voters are able to go to their polling places at their convenience rather than showing up at a caucus at 6:30 p.m. to get in line for a chance to vote by 8 p.m. Primaries are simple, clear, transparent, efficient. As a result, a higher percentage of people end up participating in primaries than in caucuses.

Both parties promise that they’ve taken steps to make it less of a hassle. Tuesday night, people will be able to show up at their caucus, vote for the presidential candidate, and get the hell out of the room before the activists start on with their lists of resolutions for the state parties to consider. Even so, it’s a clunky system that discriminates against those who can’t spare the time.

3. It’s the parties’ fault.
“The Legislature has mandated the system we have now,” said the GOP’s Downey.

He’s right about that. The statute governing caucuses has been on the books, in various forms, since 1975. The law even deals with what can happen in the event of bad weather. (Essentially, the law says that if party leaders can get a note about bad weather from the Department of Transportation and U.S. Weather service, caucuses can be postponed for a week.)

Yet the caucus system we deal with (and moan about) during every presidential election cycle is not just a creation of a legislature gone mad. The DFL and the GOP have their fingerprints all over the process.

Here’s why: On Tuesday, thousands of Minnesotans will take part in their first caucus, often because they are true believers in a candidate, such as Bernie Sanders or Donald Trump. They’ll show up at caucuses to profess their adoration. But before they can take part in the caucus, they must register. That means handing over their name and address to the party. Suddenly, the DFL and the GOP have new lists of potential activists and donors — the foot soldiers who do so much of the work in during elections. As Michael Brodkorb, a former GOP deputy chairman, explains: “The caucuses bring new customers into the store.”

4. Your caucus results may not mean what you think they mean.
After the caucuses conclude, you will be able to count the number of popular votes each candidate receives. Or you can count the delegate votes. One does not equal the other.

Imagine you’re a Sanders supporter. You’re young. You’re idealistic. You’re full of energy and hope. Imagine that your candidate has come to Minnesota and receives more votes than Clinton. But now, after the party math wizards have done their work, you learn that Clinton actually won more delegates than Sanders. You go from feeling the Bern to feeling the burn! 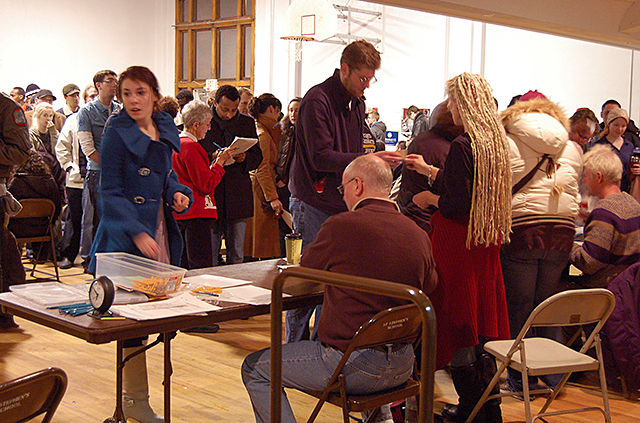 In fact, theoretically, someone such as Sanders could win so big in the metro area that he’d win the statewide popular vote. Yet Clinton could score so well in a majority of congressional districts that she’d win more delegates. The DFL’s system of “super delegates,” party officials who have delegate status and can support whomever they choose no matter the outcome of the caucuses, is still another X factor in who really “wins” on caucus night. (The GOP does not have super delegates.)

And there’s still one other delicate matter with regard to the outcome of caucus night. The caucuses are private, party events. It’s party officials who do the counting. There’s no state oversight. “We are not the caucus cops,” is how Secretary of State Steve Simon puts it.

Take the debacle of 2008, when there were far more people than ballots. Especially on the DFL side, people were writing down their presidential choice on any scrap of paper they could find. Obama crushed Clinton in the final “count” that night, but the final tally was only a rough estimation of actual votes.

5. You will realize there are good things about the caucus system. Eventually.
There are positives to the caucus system. It is a way for “outsiders” to become “insiders.”  Downey, for example, was an outsider to politics when he decided to run against longtime Republican state rep. Ron Erhardt in 2008. Through the caucus system he was able to begin the process of building enough delegates to win party endorsement over Erhardt and eventually went on to serve two terms in the House.

(Erhardt eventually returned to the House as a DFLer. When Downey attempted to move into an open state Senate seat, he was defeated by a DFL newcomer, Melisa Franzen, a loss that led Downey to becoming the GOP’s party chair.)

And there are entertaining aspects to the caucus system, particularly if you’ve got a lot of time on your hands. You get the chance to discuss all those resolutions with your neighbors. Brodkorb recalls a resolution at a GOP caucus once calling for the party to take a position on the North Sea treaty. “To this day, I don’t what it is or what position we were supposed to take,” he said.

The DFL’s Martin recalls a resolution in 1998 that called for delegates to the state convention to NOT use deodorants, perfumes or colognes, because such fragrances might be disturbing to those with scent sensitivities.

Most likely, you’ll leave your caucus thinking one simple thought: What was that?

Important, frustrating and often entertaining: a warts-and-all guide to caucusing in Minnesota