To the casual observer, it seemed like a debate over a dull-sounding governing finance mechanism — one that few outsiders may even understand.

Last week, some on the St. Paul City Council wanted to close the door early on the use of tax increment financing — better known as TIF — for the infrastructure work around the proposed Major League Soccer stadium.

TIF is a way for governments to attract economic development that might not occur without government help. Infrastructure is paid for up front while future property tax revenue from the improved site is legally pledged to repay the bonds or loans used to finance the improvements. If an undeveloped piece of land is valued at $50 million, for instance, and increases to $150 million after redevelopment, the “increment” of property tax revenue from the $100 million increase is dedicated to repaying the debt.

The current plan is for the City of St. Paul to pay cash — up to $18.4 million — for roads, sidewalks, lighting and sewers around the stadium. Some of the money will come from last week’s sale of the city-owned Penfield apartments downtown. But officials have not ruled out the use of TIF for the redevelopment of the 25 acre site, now home to the RK Midway shopping center.

Council Member Rebecca Noecker doesn’t like that idea, believing that any additional property taxes collected once the area is redeveloped should flow into the city’s general fund, not go toward paying off infrastructure loans for whatever the site eventually becomes. So last week, she introduced a resolution stating the project not be eligible for TIF.

A council majority defeated the move, with members saying they thought it best for the city to keep all financing options available until it knows what the site might become.

On the surface, it looked simple enough. Yet deeper down, the argument was over something much bigger: the promise that a proposed Major League Soccer stadium would truly be a catalyst for broader redevelopment, in an area badly in need of it.

A good deal for the city — but how good?

St. Paul Mayor Chris Coleman grabbed the Minnesota United partnership after Minneapolis rebuffed it. It isn’t hyperbole to say that this stadium deal is a much-better financial arrangement than anything the Twin Cities has seen. Team owners will cover the city’s annual payments to lease the land from the Met Council. They will foot the bill for the stadium itself. They will sign a deal that has the team covering most game-day costs. And there are no clauses like those for other stadiums that the city is on the hook to keep the stadium equal in quality to other stadiums in the league. Future improvements and enhancements will be on the team’s tab as well.

But the deal isn’t free of tax dollars. The team wants construction costs exempt from the sales tax and it wants the stadium to be forgiven from paying property taxes. Those are real dollars, measured in the millions. But all of the other new stadiums in Minneapolis and St. Paul have won such concessions, along with tens or hundreds of millions in direct government contributions. Even Coleman’s other recent plum — the Saints stadium in Lowertown — cost governments significantly more than the proposed MLS stadium.

In Minneapolis last year, the proposal wasn’t enough to overcome the resentment that deals for professional football, baseball and basketball team owners had created among elected officials and residents both.

So Coleman had to make the case that it was not just the best of a series of bad deals, but a financial win for his city. Not an intangible win, as in making the city “big league” or putting St. Paul on the map. He has said from the start that it would make St. Paul — both the government and the city — better off financially.

When the renderings of the stadium and the RK Midway redo were unveiled on Feb. 24, Coleman was asked how much the proposed tax exemptions would cost the city — and the public schools — over time.

Coleman deflected. “I think the right question to ask is how much of an increase in the property value will we see as a result of what Dr. McGuire has laid out and what Rick has laid out here,” Coleman said, referring to primary team owner Bill McGuire and RK Midway owner Rick Birdoff.

“We have a property that has the potential to have 10-to-12 times the current value when we see the full build out,” Coleman said. “And quite frankly, but for this, there is very little chance we will see this kind of increase in value. So the increase in taxable value off this property will be quite substantial over what we have today and what we would otherwise see but for this catalytic development on this property.”

The all-important ‘but for’

Twice the mayor repeated the phrase “but for.” That’s important because the legal rationale for tax increment financing arrangements is when governments attest that the increased tax revenue wouldn’t be available “but for” the government’s assistance. That is, if a real estate project would have happened anyway, it isn’t eligible for TIF financing for costs like site preparation and land purchases. The city would also have to assert that the market value of a new TIF-assisted project would be higher than the value of a non-TIF-assisted project on the same property.

The major selling point for using the former Metro Transit bus barn for the stadium was its proximity to major transportation investments — light rail and bus rapid transit — as well as the impact it would have on the long-awaited redevelopment of RK Midway. That’s one of the reasons the stadium is often described by backers and city officials as “catalytic.”

At an impromptu press conference after a meeting of the Midway Area Community Advisory Committee, McGuire and St. Paul economic development director Jonathan Sage-Martinson were asked about how the infrastructure on both sites would be paid for, and whether the grand plans for RK Midway were realistic. 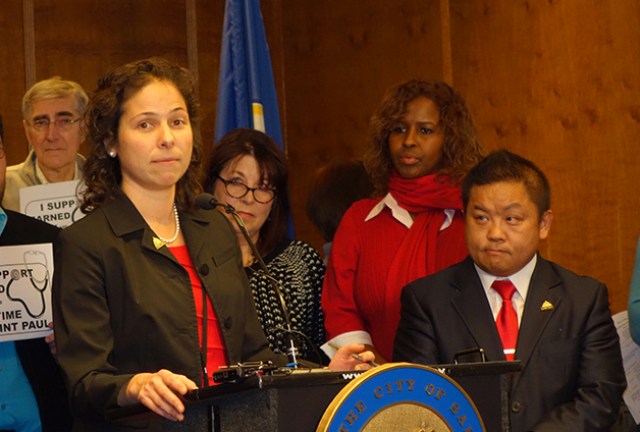 MinnPost file photo by Peter Callaghan
Council Member Rebecca Noecker, left, and Council Member Dai Thao disagree on the use of tax increment financing for the redevelopment of the 25 acre site.

Sage-Martinson said the city is “in the business regularly of investing in public infrastructure” and that it would not be asking the state Legislature for help. He added that the public investment in the area for light rail and bus rapid transit means “there are certainly many assets here to build on in terms of attracting development.”

McGuire said the stadium would change the development potential of RK Midway. “We form an anchor because this developer has seen this as a great opportunity to help spur development because he thinks people want to be around something like this,” McGuire said. And later, the principal owner of the pending MLS franchise said: “You probably wouldn’t be seeing these kinds of plans from [Birdoff] if the stadium wasn’t going to go there. The stadium is clearly the driver.”

Coleman’s comments in February could be read as him making the same point. RK Midway wouldn’t be considering a major makeover without the soccer stadium.

So the political and legal questions for the city council are these: Is there public support for subsidizing the RK Midway redevelopment after what has already been promised for the stadium site? And would some future move to use TIF funding for infrastructure there pass the “but for” test?

Two of the three council members who voted against using TIF on the project had also voted against the city’s commitment to pay for infrastructure improvements at the stadium site. They are Jane Prince and Dan Bostrom. Noecker, who offered the TIF resolution last week, voted for the city’s involvement with the stadium.

Noecker campaigned last year for reining in the use of TIF. She said Wednesday she thinks the redevelop of RK Midway will occur without TIF involvement because of the many millions in government investment in the area. She listed the Green Line light rail transit line that stops at the site on University Ave., the recent renovation of Snelling Ave., the A-Line bus rapid transit service on Snelling, improvements to bikeways in the neighborhood and now the soccer stadium.

“I believe, and I think we’ve all been saying since last August, we all believe, that stadium will catalyze development on that northern site,” Noecker said. “What I don’t think makes sense is to now say private development isn’t going to occur without additional public investment.”

Noecker said it is better to take TIF off the list of possible assistance to the RK Midway site now as part of its redevelopment than to make the owner think it might be there and remove it later.

Prince cited Coleman’s statements at the stadium unveiling, and added, “With 12 acres of this property already being tax exempt, we need to trust the promises we’ve already made to the taxpayers that this site will be a magnet for private development.”

Bostrom weighed in by saying he keeps hearing what a great location the corner of Snelling and University is after all the transportation improvements, so why not wait to see if it can attract private development without the city’s additional help. “If this is such a great intersection … it seems to me we should give private investors a shot to see what they can do on their own dime,” he said.

The council majority called the move premature. The master plan for the RK Midway property won’t even be completed until August, and only after that will the city know what might be proposed and what, if any, its role will be.

Council President Stark said that while infrastructure work could be a use of TIF financing, another use of could be to make sure there is some affordable housing in the overall project.

“While maybe hard to imagine today, the longer term vision is that the area is going to blossom economically and things are going to become less affordable in turn,” Stark said.

It might be easier to meet the but-for test for affordable housing at the site than for general infrastructure or site preparation work.

The debate moved from the legalistic to the emotional when Council Member Dai Thao objected to the move because he felt it was unfair to his ward, which abuts the property. His complaint centered on what he saw as a move to close off an economic development tool for his district that has been used freely in other parts of the city, especially downtown.

“Yeah, we have the most-livable city, as long as you live downtown or you live in Highland,” Thao said. “If we are going to be against TIF, we should start in downtown.” Noecker said she thought the city could do more for equity in that part of the city with more money in its general fund.

TIF debate will be back

The 4-3- vote against the Noecker resolution only puts off a debate over the use of TIF at RK Midway if a request for such help comes from the developer and Coleman.

Coleman spokesperson Tonya Tennessen said no decision has been made about using TIF because it is too early in the process. Only after the master plan is approved would Birdoff know what he could build and what requests he might make to the city. She called the move to preclude use of TIF at RK Midway as “unprecedented.”

“I don’t know of another case we’ve done that,” she said. Coleman wants TIF to be in the city’s economic development “toolbelt” but Tennessen added, “we don’t know if we would use it.”