Minnesota’s 3rd Congressional District, which includes inner-ring suburbs to the south and west of Minneapolis as well as affluent ones like Minnetonka and Eden Prairie has elected Republican Rep. Erik Paulsen for four elections running — and by comfortable margins.

Republicans predict he’s headed for another victory in November, but Democrats say the seat is ripe for getting picked off, especially now that DFL State Sen. Terri Bonoff has decided to get in the race. After all, the district’s voters have a reputation for political independence: In recent years, they’ve gone for President Barack Obama and Sen. Amy Klobuchar.

So just what kind of district is Minnesota’s 3rd? Could it really elect a Democrat to Congress? Here’s a look at who lives there, and how they’ve tended to vote in past elections. 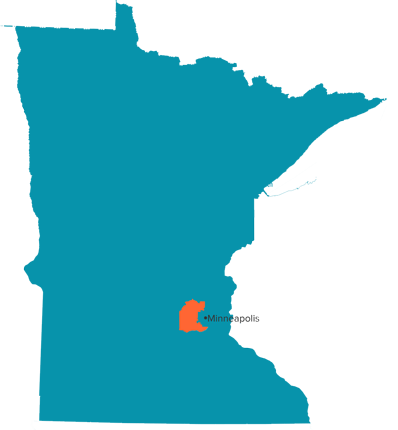 The district covers western Hennepin County as well as corners of Anoka and Carver counties and includes the cities of Bloomington, Brooklyn Park, Coon Rapids, Chanhassen, Minnetonka, Orono and Wayzata. It’s more well-off, better educated and votes at higher rates than the state as a whole, according to Census and voting figures. Though the district’s population increased, redistricting in 2012 didn’t markedly change those demographics.

That doesn’t necessarily say anything about how residents of the district will vote. The connection between income and party affiliation is complicated: “In poor states, rich people are much more likely than poor people to vote for the Republican presidential candidate, but in rich states … income has a very low correlation with vote preference,” says a 2007 study published in the Quarterly Journal of Political Science. Minnesota as a whole falls in the top half of states when it comes to median household income.

But high income usually is associated with high voter turnout. About 82 percent of 3rd district adults over the age of 18 voted in the 2012 general election, compared to 73 percent in Minnesota at large.

The 3rd District is home to major Minnesota companies like Toro, Supervalu, UnitedHealth Group, Polaris and Cargill. When it comes to jobs, many of CD3’s constituents work in management, business, science and arts, according to Census figures.

The 3rd is also the most educated congressional district in Minnesota, with 48 percent of residents holding at least a bachelor’s degree, a characteristic that makes people more likely to vote, and somewhat more likely to favor Democrats, according to a Pew Research Center study.

The 7th Congressional District, which tends to favor Republicans (though it’s been represented by U.S. Rep. Collin Peterson, a blue-dog Democrat, since 1991) has the lowest share of residents with a bachelor’s degree or higher.

Paulsen’s predecessor, Jim Ramstad, represented the 3rd District from 1991 to 2008.

In March, before Bonoff’s announcement, the Cook Political Report changed the district’s rating from likely Republican to leaning Republican. That means that while the race is considered to be more competitive than before, Paulsen is still believed to have an advantage.

If electoral history is any guide, that advantage may be substantial. Paulsen has been elected to Congress four times:

(Note that the 2008 and 2010 elections were under the previous district boundaries, which were slightly different.)

Breaking down the precinct-level results, Paulsen’s base of support is solid in the western parts of the district, which includes western Hennepin County and part of Carver county. Democrats have historically done better in the parts of the district that border Minneapolis and the Fifth District.

Source: Minnesota Secretary of State
In 2012, as in many recent elections, support for the Democratic candidate was concentrated near Minneapolis, whereas Republican Erik Paulsen could count on strong support from the western parts of the district.

That pattern was borne out in 2014, when Democratic challenger Sund did better in cities like Brooklyn Park, Bloomington and Minnetonka. Paulsen did especially well in exurbs and far-flung suburbs such as Medina, Rogers and Victoria.

That’s a different story than what happened In the state’s conservative 6th District, represented by Republican Tom Emmer, where Romney won by 15 percentage points in 2012,  or in Keith Ellison’s liberal 5th District went for Obama by a 49 point margin that year. Voters in the 3rd appear open to splitting their tickets.

While this year’s presidential race is contentious, it’s hard to predict the effect it will have on voters — and  turnout — in the 3rd District.

“It’s not going to be like the second coming of Christ, which is what the Obama race was like in 2008,” Schier said. “Hillary is not going to have that kind of response.”

On the other hand, Minnesota primary voters didn’t exactly give Republican frontrunner Donald Trump a vote of confidence, Schier said: He finished third behind Marco Rubio and Ted Cruz.

However the presidential race shakes out, Republicans are counting on the independence of Third District voters, and Paulsen’s past record of service, to carry the day. “I don’t think the third is anywhere close to a true swing district, and Erik Paulsen fits in very well,” state Republican Party Chair Keith Downey said.

“Independent of any trends or statistics that somebody might put out there to say it’s a winnable seat, I think Erik’s done such a great job that he’s a solid favorite,” he added, citing Paulsen’s opposition to the medical device tax as an issue that matters to District 3 voters.

But DFLers express a similar confidence in their candidate. Third District DFL chair Cheryl Poling said Bonoff has name recognition in the district and will be able to raise the money needed to compete, even if she doesn’t match the incumbent dollar-for-dollar.

That would be a tall order: Paulsen has more than $2.3 million cash on hand, Schier noted, adding that there will be three November congressional races touching parts of the Twin Cities — a situation that will likely clutter ad channels, making it more difficult for lesser-known candidates to get their messages out.

It’s worth noting, however, that Bonoff may benefit from the Democratic Congressional Campaign Committee’s interest in the race, which could bring in funding from outside the state.

“We can say with confidence that Paulsen is going to have his most competitive race since 2008,” Schier said.

Could Minnesota’s 3rd District elect a Democrat? Here’s what the data say