The general manager of the 180 East Fifth Street Building, a historic office building and event space in Lowertown, Bauch once opposed a request by a nearby building owner to close off the skybridge entrances at 10 p.m. rather than 2 a.m.

Recently, however, she had a change of heart. Her building’s security staff began to see an increase in problems, including people urinating, defecating, vandalizing property and having sex in stairwells and corners, and tenants began complaining that they felt unsafe.

So Bauch took action. “We believe that both staff and the public are at risk of personal harm by the youth and homeless individuals that enter the building via the skyway after business hours,” she wrote to members of the St. Paul city council. “Safety is our first priority and we have commenced closing the skyways at 10 p.m.”

Except, due to a city ordinance, she’s can’t do that. And shortly after Bauch began locking the doors that connect three different skyways to her building, she received a “corrections notice” from a fire inspector who — in response to a complaint — found the doors locked when the city’s skyway system is supposed to be open.

Unlike Minneapolis — and most cities with skyways in North America — St. Paul considers the skyways to be part of the public realm. In return for building the skybridges and connected passages, the City of St. Paul negotiated public access easements. As such, when the council required skyways to be open between 6 a.m. to 2 a.m., building owners had to comply or face sanctions. Only via a formal request will the council consider an exception, something rarely granted.

In March, Bauch made such a request, but it was opposed by city staff and the Skyway Governance Advisory Committee of the downtown neighborhood council. Members of the committee said they understood her concerns, but not her solution. The committee, reported its chair, Andy Flamm, wanted more data to determine whether closing earlier would make any difference in safety or security.

“There was also a sense that if your building closed access early, the troublemakers there would simply move to other buildings, and it is not hard to imagine those other buildings wishing to close early as well,” Flamm wrote in an email to Bauch.

Earlier this month, Bauch’s request was unanimously rejected by the St. Paul City Council. But by raising the issue, Bauch has succeeded in doing something else: pushing building owners, residents, the city and its police department to take another look at skyway security in St. Paul. 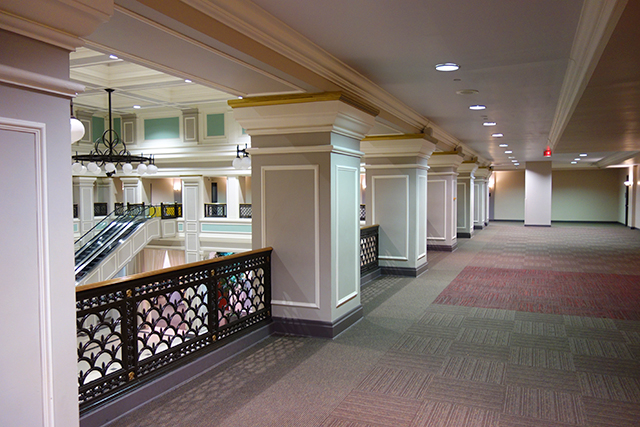 The day after the council vote, a private meeting was convened in downtown St. Paul to hear concerns about the problems. Joe Spartz, president of the Greater St. Paul Building Owners and Managers Association, said he got people together to allow them to share experiences. He called it a sounding board.

But having the conversation has raised other concerns. While businesses and residents feel the skyway system in St. Paul is generally secure, some fear that talking about the problems of a few could send a message that the downtown isn’t safe. “The most important point is that Rome isn’t burning,” Spartz said. “Downtown St. Paul, 99 percent of the time is just fine. It’s safe. It’s a very welcoming place.” 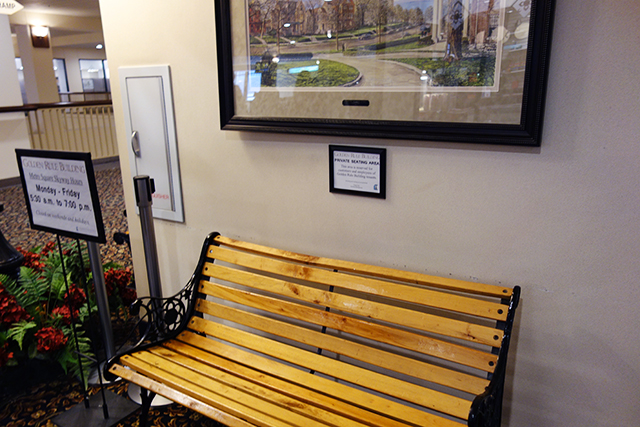 “But at the same time, building owners, businesses and residents have a higher expectation of what safety and general downtown life should be like,” Spartz said. “Other urban areas of our size would say, ‘This is normal, get used to it.’ But that’s not acceptable to us.”

Council Member Rebecca Noecker, who represents downtown St. Paul, sponsored the resolution rejecting Bauch’s request. She said closing parts of the skyway or having differing closing times is not the best response to concerns about safety.

“The last thing we want to do to make our skyways more safe is to close off exits and entrances in what are already kind of blind alleys in the sky,” Noecker said at the council meeting. Instead, she wants to work with downtown organizations, the police and social service providers to respond to problems caused by relatively few people.

But Noecker, who took office at the first of the year, said she considers concerns about safety valid. “I had a number of downtown businesses and residents contact me pretty much right after I took office that things in the skyways are becoming untenable,” Noecker said last week.

Several of the complaints center on the Green Line’s Central Station, where some business owners have asserted problems have gotten worse. That station, in the heart of downtown, features a stair and elevator connection to the skyway system, and it is one of the few obvious street entrances, with most other entrances to the system inside buildings or parking ramps. Like the rest of the system, the Metro Transit-owned tower stays open until 2 a.m. 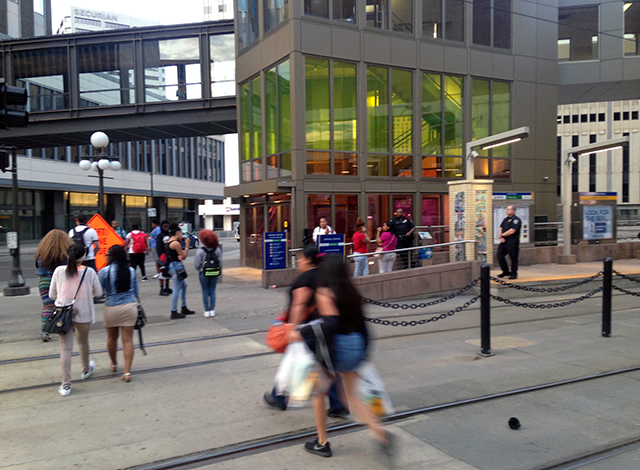 Flamm, who’s been chair of the Skyway Governance Committee of the neighborhood council for about a year, said he’s seen a rise in complaints from both business owners and residents. He also said security costs are going up and tenants are increasingly unhappy.

“The building owners still need to be responsible, but the city needs to pitch in and deal with increasing security needs,” Flamm said.

Still, the neighborhood council feels strongly that the skyways shouldn’t be shut down earlier. Instead, he said, they should be opened up because more people using them contributes to safety.

In addition to beefed up policing by St. Paul and Metro Transit police, and an increase in prosecutions by the city attorney’s office for “conduct violations,” Noecker would like to see a social services response. She suggested a St. Paul version of the Downtown 100 initiative in Minneapolis, an effort to identify people causing problems and come up with targeted interventions.

While the Downtown 100 project was primarily a response to crime, Minneapolis also has a social services-driven program that arose out of the Nicollet Mall Liveability Working Group, said Tim Marx, the president and CEO of Catholic Charities of the Twin Cities, one of working group’s co-chairs.

“We wanted to balance the needs of those who want to use downtown streets with businesses who want to attract customers, residents who increasingly want to live in downtown and visitors, who everyone wants to attract,” said Marx.

The program involves street-level outreach to both youth and adults, directing them to services but also making it clear which behaviors are acceptable and which are not. Area shelters in Minneapolis also stay open later in the morning to ease the flow of homeless people onto downtown streets.

No place to go

Marx thinks a similar response could work in St. Paul. He is more than an outside observer; he is leading the campaign to rebuild the city’s Dorothy Day center by creating a new shelter and “opportunity center” near the Xcel Energy Center.

But having more capacity for the homeless and expanded programs for housing assistance and job training isn’t enough, Marx said. St. Paul needs to restore outreach programs that sent workers throughout the downtown to find people who need help. A program that once did that won national awards, but the initiative was halted when funding dried up.

“If people are in the skyways, they may have no place to go because Dorothy Day is still full,” Marx said of the existing center that will be replaced come December. “The key is to have a response from multiple sectors, to have a plan, to have resources and to keep working at it,” he said. He thinks such an effort could improve the situation in St. Paul “dramatically.” 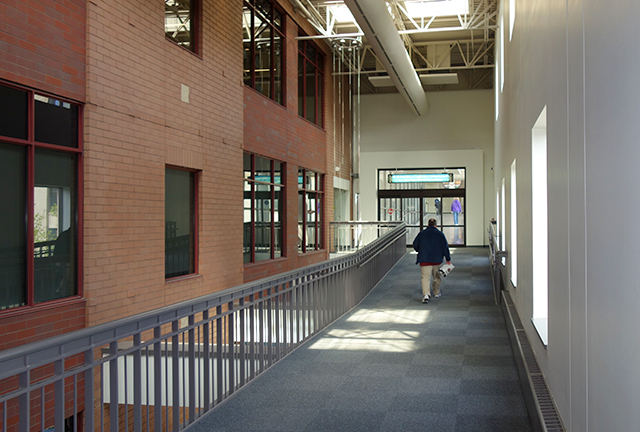 MinnPost photo by Peter Callaghan
The skyway going past the Twin Cities PBS offices and studios.

Noecker said she is thinking along the same lines, suggesting the creation of a new group of “welcome ambassadors” who would both assist visitors and provide an extra batch of eyes on the street. She said a response could also involve expanding the mission of the city’s community ambassadors, who are already working with young people both downtown and in some neighborhoods to keep them out of trouble.

Sgt. Mike Ernster, the St. Paul Police public information officer, said officers on the skyway and downtown beats work closely with the ambassadors and try to direct homeless people to services and shelter.

Noecker said she has heard suggestions for a skyway curfew for young people but said she is reluctant to restrict access to the skyways based on someone’s age or appearance of being homeless. “For the most part, people aren’t causing trouble,” she said.

What is magic about 2 a.m. as a closing time for skyways, anyway?

The hours emerged from an effort in 2008 to create uniformity for St. Paul’s 30-block system: a way to make the system better used and more predictable. And the longer hours continue to have a strong constituency, especially among the growing number of people who call downtown St. Paul home.

Yet Minneapolis, with private ownership, has varying closing times, though its uniform skyway hours call for them to be open from 6:30 a.m. to 10 p.m. weekdays, 9:30 a.m. to 8 p.m. Saturday and noon to 6 p.m. Sunday — hours that do not appear to harm the vitality of downtown Minneapolis, said Spartz

And even in St. Paul,  skyway hours are not universal. For example, one building at the end of the system, the Metro Square Building, is allowed to stay open only on weekdays and only from 5:30 a.m. to 7 p.m.

While Noecker says she is not opposed to discussing the closing time in St. Paul, she doesn’t want it done in response to “a climate of fear.”

Yet Bauch, the general manager of the 180 East Fifth Street Building, is not giving up. City code requires that building owners must eliminate skyway “hiding places”; provide emergency call boxes; adequate heat and lighting; and security via patrols and video during all hours when the skyways are open.

Because Bauch’s building has an unusual configuration, however, “there is no way our security staff can keep an eye on it all,” she said. If they see a problem on a video monitor they would have to run the equivalent of a city block to reach the incident. “I don’t know how much security I’d have to have to keep my building secure.”

“I don’t want to shut down St. Paul,” she said. “But having the skyways open until 2 a.m. is negatively affecting St. Paul.”