Minneapolis Police Department brass are preparing a new policy governing video recordings of police activities, but it’s not the one that has gotten a lot of media coverage — a long-discussed roll-out of body cameras for all officers, something that is set to begin in late May.

The other new policy will state that the public has a right to take photographs and video of officers while they are working. That right is not the department’s to grant, since it’s been determined in multiple court rulings that such activity is covered by the First Amendment to the U.S. Constitution.

But a second part of the proposed recording policy is significant. It will state that Minneapolis officers who interfere with a resident filming or photographing them — as long as that person isn’t inhibiting the cops from doing their job — will be subject to discipline.

Acknowledgement of the policy change came at the end of last week’s meeting of the council’s Public Safety, Civil Rights and Emergency Management Committee. After a lengthy discussion of the body camera policies and procedures, committee Chair Blong Yang asked about recordings covering a different angle of a scene, from bystanders filming the cops.

“What is the police department’s position on that with regards to allowing people to use their camera phones or any sort of recording device to record the police?” he asked Minneapolis Deputy Chief Medaria Arradondo.

Arradondo, who serves as Chief Janee Harteau’s chief of staff, said the department would be coming out shortly with such a recording policy. “It will spell out specifically the citizen’s right to do that, and that officers should not prohibit citizens from doing that; and if so, the consequences,” he said.

While most of the video footage of controversial deaths at the hands of police officers has been from government videos — often body or dash cameras — or from private surveillance cameras, some of the recordings have been taken by bystanders.

In Minneapolis, a video taken in March of 2015 captured Officer Rod Webber threatening a teenager. Webber was fired nine months later. In another case, the city paid a settlement to a woman allegedly struck by an officer after he saw her filming him arresting her friends.

There have also been instances when bystanders have been ordered to stop recording and arrested when they refused. In one case from 2012, Andrew J. Henderson was arrested while recording an ambulance crew and a Ramsey County deputy in Little Canada.

Prosecutors argued that Henderson was in close proximity to the crews and that they had asked him to stop. Henderson said he was many feet away, and maintained that the video would have proven his version had it not been deleted after the camera was confiscated. He was later acquitted of disorderly conduct and interfering with ambulance staff. (Henderson is also the person who discovered that the author of a Facebook post advising motorists how to escape charges if they hit Black Lives Matter marchers was St. Paul Sgt. Jeffrey Rothecker.)

“People have a First Amendment right as long as they are in a place where they are lawfully allowed to be,” said ACLU of Minnesota legal director Teresa Nelson. “If you don’t have a right to be there, don’t film.”

As far as laws against obstructing an officer, the courts have set a higher bar, Nelson said. “Your conduct must rise to the level of a physical obstruction,” she said. “Merely being annoying isn’t enough.”

Minneapolis Council Member Blong Yang agrees that there is confusion on both sides. “We hear from residents, protesters, potential protesters that it is unfair that cops don’t let them record,” Yang said. “The public perceives that they aren’t allowed or that cops confiscate the footage.” 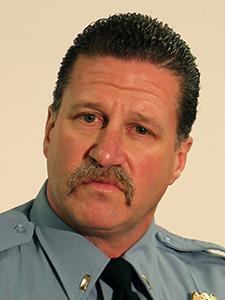 Yang said he hopes the department will have the recording policy in place at the same time that officers begin to be equipped with body cameras, expected now by the end of May.

The Minneapolis Police Officers Federation, the union for rank-and-file MPD cops, has been notified about the pending policy and is also supportive. “We tell our officers that you should assume you’re on camera all the time,” said Lt. Bob Kroll, federation president. “If you don’t, you’re not going to work in this field very long.”

Kroll said the federation does not know what level of discipline would be involved, but he made a connection between this policy and the pending body camera procedures. “The only issue I have is there are groups who don’t want us to tape people at civil disturbances or protests,” Kroll said, in reference to some expressed concerns that body cameras will be used for surveillance of the public. “If cops are expected to be on camera, then people involved in police activities should expect to be on camera.”

Destruction of footage also a concern

Beyond the right the record, the other fear among civil liberty activists is that the police will destroy footage recorded by bystanders, as happened in the Henderson case in Little Canada. That’s what led ACLU affiliates around the country to create “Mobile Justice” apps, which feature the ability to immediately send footage to the ACLU once a user stops recording.

ACLU of Minnesota Communications Director Jana Kooren said the state app has been downloaded more than 4,600 times. “While we have not gotten any actionable footage yet, we did receive footage from the 4th precinct showing how police were interacting with protesters,” Kooren wrote, in reference to the 18-day occupation of a north Minneapolis police station following the death of Jamar Clark in November 2015. “So we know that the app is empowering people to film the police in public.”

In a letter written by ACLU of Minnesota executive director Charles Samuelson to Minneapolis Chief Janee Harteau last fall, before the app was launched, Samuelson urged Harteau to “provide guidance” to her officers about the right to record, both by bystanders and by people involved in an encounter with police officers. 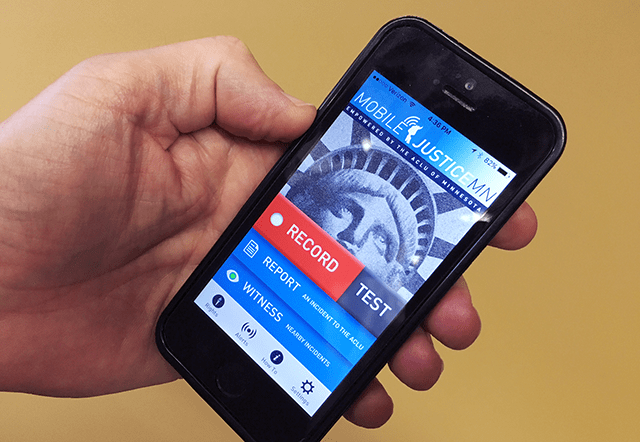 MinnPost photo by Corey Anderson
ACLU affiliates around the country have created “Mobile Justice” apps, which feature the ability to immediately send footage to the ACLU once a user stops recording.

“The policy should also prohibit officers from harassing, detaining, or arresting those who fail to stop recording when they are not physically obstructing the officers,” Samuelson wrote. Such citizen video, he argued, would serve a similar function as recordings from body cams.

“Having a clear policy will also help foster a strong relationship between officers and members of the community because the policy will likely foreclose many unnecessary negative interactions between police and individuals who are simply filming their activities,” Samuelson wrote.

Grant Stern, the executive editor of a website devoted to police videos, pointed to a model for such right-to-record policies: Colorado’s first-in-the-nation law, passed last May, that not only restates a citizen’s right to record police, but states that the public has a right to maintain “custody and control” of any recording devices and footage. The law also creates a cause of civil action against police who interfere with a citizen recording, and sets a $500 payment for any damage to devices and a fine of up to $15,000 for interference.

While news photographers don’t have special rights to record actions of police officers, they do have the same rights are other citizens — and exercise them more frequently. Still, Alicia Calzada, an attorney for the National Press Photographers Association (NPPA), said interfering in news gathering is “a persistent problem around the country.”

Mickey Osterreicher, a Buffalo, NY attorney who is general counsel to the NPPA, said he hears a few times a week about photographers — both citizens and journalists — being harassed and sometimes arrested for recording police activities.

Osterreicher is uniquely trained to deal with the issues presented: He has a bachelor’s degree in photojournalism, a law degree and has been a reserve cop in Erie County, New York for 40 years.

“Mistrust by law enforcement of those with cameras and the misguided belief that photography and recording in public places may be restricted under color of law will continue unless proper policies and guidelines are implemented,” Osterreicher wrote in the April edition of Sheriff & Deputy magazine, a publication of the National Sheriffs’  Association. “But those policies will remain only pieces of paper without continuous reinforcement, proper training, and, where merited, disciplinary action against those officers who violate department guidelines.”