The public-private organization covering the three east metro counties of the Twin Cities — Ramsey Washington and Dakota — fears that their half of the region will fall behind without better transit connections. While the counties, taken together, have the same population as Hennepin County, they lag behind their west metro counterpart in transit lines and employment.

Those two gaps are not a coincidence, asserts a “Vision Report” released by the organization that argues economic growth in the region will depend on transit access. The organization includes the three county governments, many of the cities in the area, the St. Paul Chamber of Commerce and businesses such as 3M and HealthEast.

Looking just at what the group terms the east metro “Vision Area” — census tracts with easy access to one of six proposed transit corridors — there are 600,000 residents, 350,000 jobs and 125,000 students. Yet currently, only 26 percent of this area is within a quarter-mile of daily transit service and only 40 percent is considered walkable. “As a result, despite having a healthy concentration of jobs, residents of East Metro cannot, on average, reach many of those jobs via walking or transit,” the report concludes.

The entire region already ranks just seventh among the 12 similar-sized regions in access to transit. “And within a region that lags its peers, two of the three East Metro counties have far less access than even the MSP regional average …” the report states.

What’s more, the Met Council’s growth forecast for those counties projects that by 2040 there will be 172,000 more residents, 105,000 more jobs and 35,000 more students. For all that, though, just one additional fixed transit line is planned to serve eastern counties in the Met Council’s long-range transportation plan.

A desire for ‘sustainable’ funding

Will Schroeer is the executive director of East Metro Strong. He said providing more transit options and making the area more walkable should be goals for the entire region, not just its eastern half. “The East Metro does not prosper without better transit, and the region does not prosper without a prosperous East Metro,” Schroeer said. “If it just becomes Minneapolis and a bunch of suburbs, it is less interesting.”

But as state Sen. Susan Kent, a DFL member from Woodbury, explained at a recent St. Paul Chamber forum, the goals go much further, including a transportation package adopted by the state Legislature that contains what she called “adequate, comprehensive and sustainable” funding for both road, bridges and mass transit. 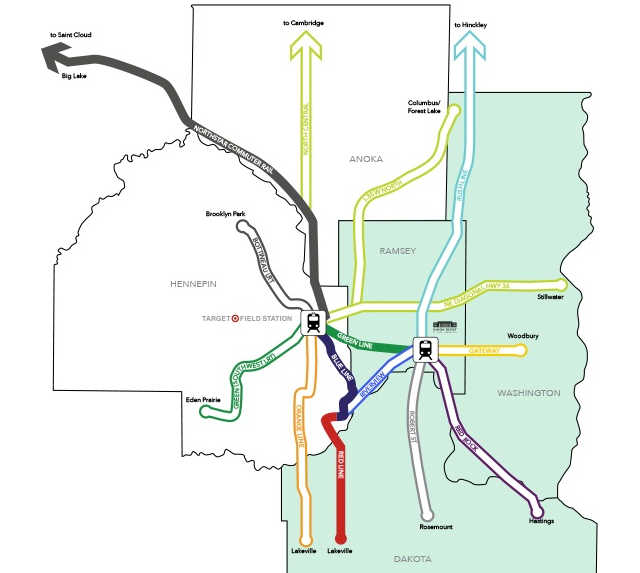 To East Metro Strong, the sustainable part means ongoing funding, not just a one-time piece of the current state revenue surplus. Such funding would put additional east metro corridors on track for planning dollars — and eventually placement in the Met Council’s transportation policy plan. Only the Gateway Gold Line is currently in what’s called the TPP. Without an expansion of regional funding for transit lines, however, even that is unlikely to move forward, and there would then be less chance additional east metro corridors — Red Rock, Robert, Rush and Riverview — will be developed.

If they are built, however, more than half of those currently living in the three counties would be served by regular transit service: light rail, arterial bus rapid transit and highway bus rapid transit.

‘We need our spokes’

“The statistics were compelling,” said Washington County Commissioner Lisa Weik, who chairs the Gateway Corridor Commission and is an executive board member of East Metro Strong. 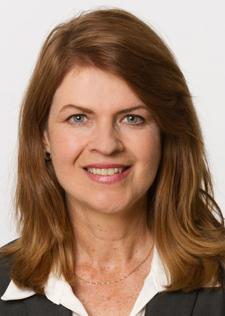 Though the combined population of Ramsey, Washington and Dakota County is currently equal to that of Hennepin County, the area is projected to grow at a slightly faster rate. “Yet we’re lagging in infrastructure investments,” Weik said. “It was surprising to us. We thought it would be surprising to others as well.”

She said the region has two major transit hubs: Target Field Station in Minneapolis and Union Depot in St. Paul. But the spokes emanating from Target Field are much further along in their development than those leaving Union Depot. The North Star commuter train runs to Big Lake, and extensions of the Blue Line and Green Line to northwest and southwest suburbs are well along in planning.

“We need our spokes as well,” she said. Currently there is little all-day and two-way transit service. Instead, commute-time express buses take workers to downtowns in the morning and back at night. The lack of regular transit means people who live in much of the east metro lack alternatives to driving a car.

“Much is made of millennials and their self-professed desire to use transit instead of using a car,” said St. Paul Chamber President Matt Kramer. “Whether it’s true or not is immaterial from a business perspective, because if you don’t have transit you need to own a giant parking lot or a giant parking ramp. That’s the least profitable part of a business.”

Kramer said the region isn’t looking to rebuild a fixed route transit system — like the one that was torn up at midcentury — because it’s “trendy.” It’s because “predictable, reliable transit is a business enabler,” he said.

State transit funding has become locked in a partisan impasse between DFL leaders who want transit to be part of a transportation deal and Republicans who have been opposed to any additional money for light rail projects. But at most, the state share of light rail and major bus rapid transit projects such as the Gold Line/Gateway is just 10 percent. If ultimately accepted by the federal government, such projects receive upwards of 50 percent from federal appropriations to go along with 30 percent from the regional Counties Transportation Improvement Board (CTIB) via its five-county sales tax. Another 10 percent comes from an affected county’s regional rail authority, through a property tax levy.

A proposal by DFL Gov. Mark Dayton would increase the CTIB sales tax from one-quarter cent to three-quarter cent and use that money to cover both the regional 30 percent share as well as the state’s 10 percent. It would also increase the gas tax for statewide road and bridge projects. But that proposal has not been embraced by House majority Republicans, both because of the gas tax hike and because of the transit funding. Negotiations on a transportation budget are in the hands of a House-Senate conference committee.

East Metro Strong is endorsing increased funding for transit without specifically endorsing any funding plan. “The state needs to fund transportation,” said Weik, who serves in a non-partisan position but was endorsed by the Republican party. “That is especially true if they listen to business, large corporations, developers and people who want to live in well-planned cities and near well-developed transportation facilities.”

Kramer did not venture a prediction for a transportation finance bill in the current legislative session. But he did say one difference between last year and this year is the Minnesota Chamber of Commerce’s recent endorsement of an end result that includes transit funding.

There are regional opponents of more transit corridors. The City Council of Lake Elmo reversed its support for the Gold Line; some suburban residents think transit lines will disrupt their more-rural lifestyles, a point reflected in a quote given to the Pioneer Press from an opponent of the Gold Line:  “This is the suburbs,” she said. “People do not move to suburbs to take a bus.” A group called Citizens for Smart Transit has also formed to oppose the Gold Line.

The Gold Line is less expensive than proposed light rail extensions, which are estimated to cost between $1.5 billion and $1.774 billion. But at $485 million, the Gold Line would still be more expensive than arterial bus rapid transit. That is due in part to the construction of new dedicated guideways on frontage roads next to I-94. The A-Line arterial BRT that will start service on Snelling Avenue in June uses existing lanes and is costing $27 million. But the Gold Line would likely will be a candidate for a federal match, something small projects like the A Line are not.

Kramer said polling done for the chamber gives him confidence that East Metro Strong represents a majority viewpoint in the three counties. “People see transit as a net positive,” he said.

In official requests to the Legislature last year, both Ramsey County and the City of St. Paul used the term “balance” to call for more equitable funding on transportation.

Kent used that history to emphasize why an organization such as East Metro Strong is needed. “It’s not about competition in a zero-sum sense with Hennepin County,” Kent told the chamber luncheon.

“Historically there is an efficiency built into Hennepin County that has facilitated investments there,” said Kent, referring to the fact that Hennepin County only needs agreement from a single county commission to move ahead with projects while those in the east metro have to get consensus from three different counties.

Echoed Weik: “In Hennepin County, to get something done, you need four votes. There’s only one (regional rail authority) to deal with.” 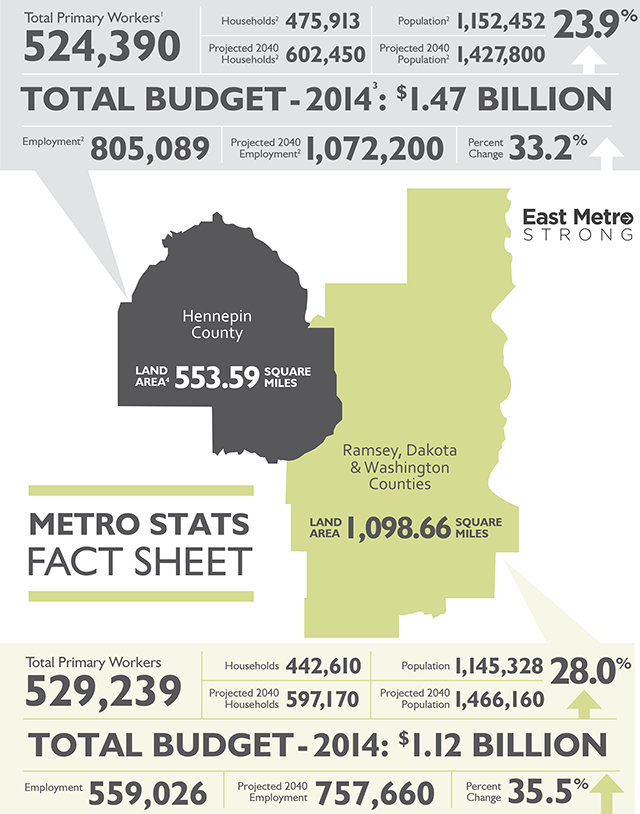 Weik rejected the suggestion that the lack of investment in transit in the east metro is a matter of unfairness or bias. Instead she said the eastern counties haven’t done the studies that are required by the federal government and the Met Council to demonstrate the need for and costs of rail and BRT lines. That is changing, she said, citing the work being done on Gateway.

The chamber’s Kramer, who once worked for Republican Gov. Tim Pawlenty, said he sees a regional political dimension to the East Metro Strong agenda. It is a fact, he said, that much more has been done for fixed transit in Minneapolis and Hennepin County than in the east metro. “If we are paying for a series of lines in the west metro, we won’t be pleased if those are the last lines built,” he said.

Kent, a member of the House-Senate conference committee trying to forge a compromise on transportation funding, said the predictions of population and job growth are motivating more unity in the east metro. But, she warned, “a growth forecast is not a guarantee.”

“If more transit connections to jobs and underlying activities are not available in the east metro, then people and companies might choose the west metro or they may choose other regions in the country.”

A question of fairness? East metro group makes its case for more transit in Dakota, Ramsey and Washington counties