Hennepin County became the first government in the region Tuesday to pitch in on a new effort to help preserve what is termed “naturally occurring” affordable housing in the metro area.

The county’s $3 million will be combined with money from other sources, including foundations and banks, to build a $25 million fund led by the Greater Minnesota Housing Fund. The money will be used to buy apartment complexes before they can be purchased by real estate investors and converted into market-rate housing.

The effort comes in response to a hot real estate market in the Twin Cities, which has created financial incentives for investors to purchase affordable housing complexes, remodel them and increase rents. Tenants of those properties are often faced with displacement if they can’t afford the higher rents and if the new owners stop accepting Section 8 housing vouchers. Three such conversation have already happened recently in Hennepin County, potentially making 1,300 affordable units unaffordable for low-income renters.

Warren Hanson, president and chief executive of the Greater Minnesota Housing Fund, described the NOAH Impact Fund (NOAH is an acronym for naturally occurring affordable housing). He expects to have funding commitments of $25 million by sometime this summer and begin purchasing properties in the fall. The money would be used for the equity investments in buildings — essentially down payments — with the rest of the purchases funded with traditional bank financing working with entities that already own affordable housing properties.

The fund will target buildings that are not subsidized or government-owned, and that are generally older, Class B or Class C complexes that command lower rents, in the $550 to $1,200 a month range.

Hanson estimates that some 1,000 affordable units in the metro area could be preserved with the plan. In five years, he hopes to have raised another $25 million to be able to purchase another 1,000 units. In 10 years, according to the Greater Minnesota Housing Fund’s proposal, the contributions from Hennepin County and other investors will be repaid, along with some profits.

How can such a program compete in a hot market, when property sales happen quickly? Hanson believes affordable housing advocates, as well as those who own and manage buildings, will form the network of eyes and ears to discover owners who might be ready to sell before those properties hit the market. That way the fund can get there first. Building owners might be convinced to sell to the fund as a way to both make money on a sale and assure that current tenants will not be displaced.

The buildings would be owned by nonprofit organzations or by for-profit companies that already have both market-rate and affordable housing in their portfolios. For example, Hanson described a recent purchase that was used to test the idea behind the project. A 72-unit New Brighton apartment building was purchased for $79,000 per unit with another $8,000 per unit spent for upgrades — a $6.8 million purchase that was made in partnership with for-profit Real Estate Equities.

“You know who will hate this?” he asked after winning county board approval. “Big real estate investors from out of state.”

Unanimous approval by Hennepin County Board

Affordable housing is defined as being within reach of households at or below 60 percent of the area’s median income (in the Twin Cities, that means a little over $51,000 a year for a family of four). Hanson said the housing fund estimates there are 167,000 naturally occurring affordable units in the seven-county metro area. Hennepin County is home to more than half of that total, with Ramsey County holding a quarter.

Hennepin County’s appropriation of $3 million was approved by its board of commissioners 7-0, with even the council’s lone Republican, Jeff Johnson, voting in favor. Johnson is often critical of increases in county spending and property taxes but was satisfied that the county is not at risk for anything more than the $3 million. 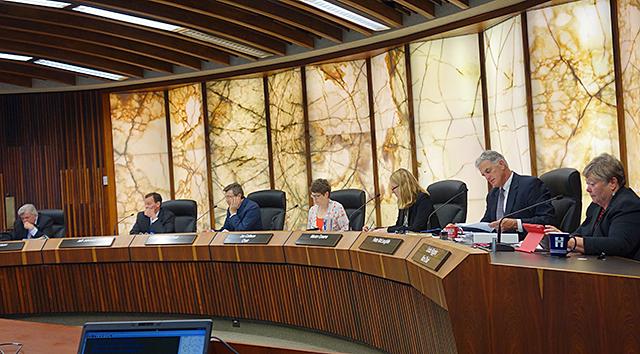 MinnPost photo by Peter Callaghan
Hennepin County’s appropriation of $3 million was approved by its board of commissioners 7-0, with even the council’s lone Republican, Jeff Johnson, voting in favor.

Commissioner Mike Opat said he was concerned that the money might be spent in areas that already have plentiful affordable housing, such as in his district, which contains Brooklyn Park, Brooklyn Center and Robbinsdale. Hanson said he expects the fund will be used to purchase properties spread around the metro, with a focus on what are called “opportunity areas” — those with good transportation, schools, jobs and health care.

There is a backstory to both the question and the answer. Brooklyn Park and Brooklyn Center are parties to an official complaint with HUD, claiming that governments in the region have over-concentrated affordable housing — both naturally occurring and government-sponsored — in low-income areas. And HUD’s official policy is to require states and local governments to provide housing options for low-income people in both those neighborhoods and areas of “high opportunity” — generally areas with wealthier residents and fewer people of color.

That has brought pushback from some residents and advocacy groups, who complain that the message being sent is that being poor and living in certain neighborhoods is a problem to be solved — that the way out of poverty is to move. There is also a concern with low income people being forced out of buildings and neighborhoods as they become more attractive to wealthier renters, who are often younger and whiter.

Former Hennepin County Commissioner Gail Dorfman, now a member of the Met Council and executive director of St. Stephen’s Human Services, a nonprofit working to end homelessness, complimented the county on helping form the NOAH fund. “We’re rapidly losing affordable housing opportunities,” she said, citing the Crossroads apartments in Richfield, with 690 units; Meadowbrook in St. Louis Park, with 551 units; and Stonehaven in Golden Valley, with 70 units. In each case, new property owners raised rents and decided to no longer accept Section 8 and other rent subsidy payments.

Hauge said his organization gets several calls daily from people facing eviction and struggles to help them. Landlords can refuse to accept Section 8 vouchers and finding those who will in the areas where evicted tenants already live is difficult.

Dorfman, Hauge and Rosenthal all called on the county to convene governments from throughout the county to create broader responses to the affordability problem exacerbated by conversions. That could include better protections against sudden evictions and requirements for more tenant-friendly leases. Minneapolis is considering an ordinance that would make it illegal to discriminate against a potential renter based on their use of vouchers. “This is a good start but there are other policy options to be considered,” Rosenthal said.

Commissioners were enthusiastic about taking part in the impact fund. Peter McLaughlin called it a “big deal” and a response to an increasing problem. He described the supply of affordable housing as being inside a large sack. As quickly as new housing is created, existing housing is leaking out the bottom via conversions. “We’re leveraging private money,” he said of the project. “We’re taking some risk but it is a measured risk, and we have a known intermediary in the housing fund that will be managing our money and other people’s money.”

Commissioner Jan Callison said housing is at the center of most of the social service issues that county deals with. “So many of the problems we deal with, the problems our clients face, start with housing,” Callison said. “They can find appropriate housing, they can’t maintain housing, they can’t find secure housing.” Funding new affordable housing is one response but so is preserving the housing that exists, she said.

Afterward, Hanson said he expects to announce other funding partners — governmental, philanthropic and private — over the coming weeks.