Metro Transit is having a party this weekend.

Nearly two years to the day that it celebrated the opening of the Green Line light rail route, the regional transit agency will christen its first edition of another transit mode that could become more-familiar in the coming years: bus rapid transit.

Designated as the ‘A Line,’ the high-capacity bus route will travel from the Rosedale Mall in Roseville to the 46th Street Blue Line station in Minneapolis. It will travel mostly through St. Paul on Snelling Avenue and Ford Parkway. The 10-mile, 20-station route cost $27 million, including construction and purchase of specialized buses.

On Saturday morning, in the the parking lot of the Midway Shopping Center in St. Paul (and within earshot of the Green Line), Metro Transit officials will hold a ceremonial ribbon cutting starting at 9:25 a.m. The first bus will depart at 10 a.m., and every 10 minutes thereafter. Rides will be free on Saturday, Sunday and Monday.

Also on Saturday, from 10 a.m. to 2 p.m. at University and Snelling avenues (as well as sites in Roseville and Highland Park) Metro Transit will also feature attractions such as music, food trucks, face painting and transit trip planners to help potential riders plan routes on the new line.

The Met Council is counting on bus rapid transit to build out the regional mass transit system — at less cost and with less lead time than light rail. The next two light rail lines — the Southwest LRT extension of the Green Line to Eden Prairie and the Bottineau extension of the Blue Line to Brooklyn Park — are the last currently being planned.

Metro Transit planners note that a dozen local bus routes carry 90,000 daily riders, one third of the agency’s daily ridership. They say that in high-volume corridors, buses make up less than 3 percent of traffic but carry a third of the travelers.

Those high-use corridors are being eyed for conversion from traditional bus routes to BRT. Next will come the ‘C Line,’ which will travel from the Brooklyn Center Transit Center to downtown Minneapolis, mostly along Brooklyn Boulevard, Penn Avenue and Olson Highway.

So where’s the ‘B Line?’ It’s on hold while Ramsey County conducts a study of the route, which is set to run between downtown St. Paul and the Minneapolis-St. Paul International Airport. The study could result in a recommendation that light rail or streetcar be the preferred mode on what is designated as the Riverview Corridor.

Also in planning: a series of highway bus rapid transit lines designated by colors: the Orange Line (from Burnsville to downtown Minneapolis via I-35-W); and the Gold Line (from Woodbury to downtown St. Paul along the I-94 corridor).

Bus rapid transit takes some of the advantages of light rail and applies them to rubber-tired vehicles. Stations are spaced at half-mile intervals, saving time with less-frequent starts and stops. The stations also have light-rail-type features, including lighting, heating and security cameras. Most importantly, to speed up boarding the stations will have ticketing machines similar to those used at light rail stations. 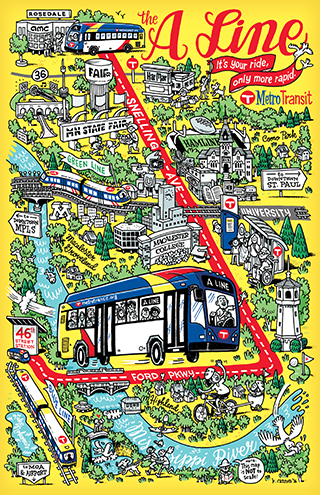 The dozen new buses used on the ‘A line’ are also different; they have wider doors and floors nearly level with station platforms. And since they don’t pay fares on board, passengers can board and exit from either set of wider doors. The buses also have some ability to control stop lights, again speeding up the trip. And many of the stations are flush with the right traffic lane, allowing the vehicles to avoid merging into traffic after stopping for passengers.

Planners think the slightly increased speed — about 20 percent faster on average — and more-frequent service (buses will arrive every 10 minutes) will boost ridership from the 4,000 daily riders who travel via the current bus route to 8,000 by 2030. The current bus route, No. 84, with more-numerous bus stops, will continue to run at 30-minute intervals.

Ultimately the transit agency would like to build 20 rapid transitways by 2040, with 16 being BRT. Active studies are looking at the Midtown Corridor, West Broadway, Nicollet-Central Corridor, the Red Rock Corridor, Robert Street and Rush Line.

Transit advocates have had some fun with a cartoon route-map/poster created for the opening celebration. While there are light rail trains, BRT buses and even a bike-riding parent with child, there are no cars featured. Also missing? Interstate 94. And while there is a football at Hamline University and a gold ball at Highland, there is no soccer ball near the Midway Shopping Center. At least not yet.