The following is excerpted from Jay Walljasper’s new book, “America’s Walking Renaissance,” which can be downloaded for free here.

Laughter, lively music and lip-smacking appreciation of food from many cultures animates St. Anthony Avenue in St. Paul as a crowd whoops it up at the Better Bridges Bash.

Even chilly spring temperatures and gusty winds can’t dampen folks’ enthusiasm — nor does the unpromising location right next to the roaring traffic on Interstate 94. Indeed, that’s the point of the event: to better connect neighborhoods on either side of the freeway by improving the bridges and to explore ways to make the area more friendly to people when they are not in cars.

This is why — in addition to enjoying a kazoo parade, a Liberian-American rapper and the Lexington-Hamline Community Band — festival-goers wander into tents where they are encouraged to think expansively about their neighborhood’s future.

“We’re seeing that this community is engaged in how the streets feel, and they are letting local leaders know what they want,” offers Isaak Rooble, who is standing next to a gallery of photos showing possible improvement projects for this mixed-income, mixed-race community. People stick green post-its to ones they like; pink ones to those they don’t; and yellow for maybe.

Among the photos generating the most excitement are:

At another tent, people are invited to share their own brainstorms for the neighborhood on an Idea Tree. Here are a few of the brainstorms:

“I am passionate about community development and helping migrants get involved with the community,” says Isaak Rooble, a young Somali immigrant working with Friendly Streets Initiative (FSI), the organization hosting the event.

FSI is conducting surveys with as many people as possible in English, Somali, and Oromo (a language spoken in parts of Ethiopia and Kenya) to learn more about issues in the neighborhoods close to the freeway. This is part of the organization’s “community-led mission,” which means “we are guided by the ideas coming out of neighborhoods,” explains Robyn Hendrix, an artist organizer with the group.

On the streets where we live

The Friendly Streets Initiative grew out of a group of volunteers working with various neighborhood organizations to make biking and walking safer in the Hamline-Midway neighborhood. In the summer of 2011, they sponsored a series of five parties along Charles Avenue a few blocks north of University Avenue to discuss community concerns. The group created a survey to measure residents’ opinions and offered a photo gallery of innovative street designs found around the world.

Closing off a block to traffic from 3 to 7 p.m. on Fridays, the parties featured food from local restaurants, games, and the opportunity for neighbors to get to know each other better. “More than 700 people turned out and we got a real sense of what the community thought,” recalls Lars Christiansen, an urban sociologist at Augsburg College who lives in the neighborhood. “What they liked and what they didn’t.” 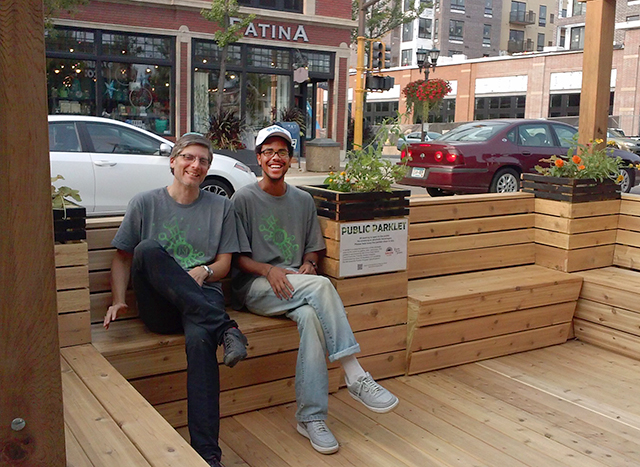 The ideas folks liked most became the nucleus of the Charles Avenue Friendly Street plan, which emphasized four street improvements:

2. Traffic circles, which help slow the speed of vehicles at low-volume intersections;

3. Medians and other modifications at busy intersections, which provide refuge for pedestrians and bicyclists crossing the street;

4. A raised intersection, and sidewalks bumping out into the streets at select locations.

The volunteer committee formally organized themselves as the Friendly Streets Initiative to build support for the Charles Avenue project among neighbors and on the City Council. Construction on Charles Avenue began in 2014 along a four-mile stretch of the street running through racially and economically mixed neighborhoods and is still underway.

“FSI built grassroots support for change in St. Paul, a city reputed to have lots of opposition to bike and walk projects,” observed Jessica Treat, director of Transit for Livable Communities in an interview earlier this year. Since then TLC has become FSI’s fiscal sponsor.

Treat credits FSI with mobilizing young families and other groups in the city who don’t usually weigh in on planning decisions, which showed political leaders the depth of public support for walk and bike projects.

Council Member Russ Stark, whose ward contains a section of the project, notes that FSI has changed how business is done in St. Paul. “By talking to people where they live, by using block parties and other means to find out what people value on their streets, they’ve helped change how we do civic engagement. We usually hear from a vocal minority on projects, but we don’t necessarily know what the public as a whole thinks.”

Starting in just one neighborhood, FSI now works all over Minneapolis-St. Paul thanks to the support of the Central Corridor Funders’ Collaborative, the Knight Foundation, Blue Cross and Blue Shield of Minnesota and other funders.

One of FSI’s major pushes now is a project coming out of the Better Bridges Bash to create better bike, foot and transit access in neighborhoods on either side of 1-94 in between the Capitol and the Minneapolis city limits. This includes Rondo, the historical African-American neighborhood where photographer Gordon Parks and civil rights leader Roy Wilkins grew up, much of which was bulldozed in the 1960s to construct the freeway.

“It was a beloved community,” says Melvin Giles, FSI community organizer, who remembers Rondo as a young child. “People would walk to the neighborhood store and kids could see all the others kids. They’d play baseball and football in the street. You couldn’t do those things today.”

What was once Rondo is probably the worst place in St. Paul to walk today, with a freeway ripping through the middle of the area and bridges that feel dangerous and dispiriting to cross.

“They seemed not to care a lot about poor kids and African-American kids getting to school, or anywhere else, when they built the freeway,” remarks Anne Parker, an artist working with FSI who has lived in the neighborhood for 26 years. 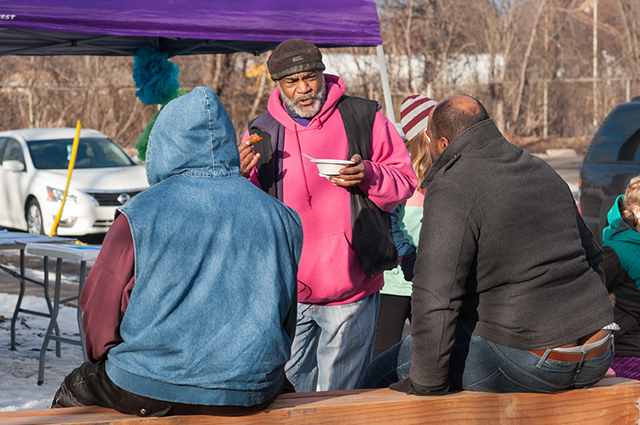 Last summer a group of government, transportation and community leaders toured the bridges on foot as part of a workshop FSI sponsored with the St. Paul Riverfront Corporation. The group noticed right away that crossing Lexington Avenue on the north side of the bridge is a daunting process that can involve waiting at three stoplights and crossing eight lanes of traffic, much of it turning in front of you. Seeing someone negotiating the street in a wheelchair caused several people in the group to shudder.

Conditions are equally grim on many of St. Paul’s other I-94 bridges. Many walkers endure sidewalks so narrow that they must scrunch together to walk side-by-side, and switch to single-file if any other walker needs to pass.

“We heard over and over that the bridges are a real issue,” says Christiansen, explaining how FSI’s Better Bridges project was born.

“A lot of outside groups who want to help the neighborhood just come in and start doing stuff — FSI did not do that,” says Melvin Giles, explaining why he joined the group. “As an organization we help the community decide what it wants by offering a process for people to think about what they want from their streets — and then we will work with them.”

Giles helped convene a series of listening sessions with elders and leaders in the African-American community. “FSI is not doing things for us; it’s doing things with us,” he says. “It’s not just community engagement. FSI shows you how to turn your ideas into reality.”

One of the community leaders Giles contacted is Marvin Roger Anderson, a retired attorney and former Minnesota State law librarian.

The long-term goals of the project are to call on the community’s expertise and creativity to inspire fresh thinking about transforming these bridges from barriers into connectors between neighborhoods. Planned reconstruction of the freeway offers opportunities for big ideas, like the land bridges that stir so much excitement in the community.

Community brainstorms at street parties and other events have already been held for some of the bridges.

“We want to collect ideas now so that when it comes time to remodel the bridge, we don’t just get a cookie-cutter approach,” says longtime Frogtown neighborhood activist Patricia Ohmans about a design charrette focusing on the Victoria Avenue Bridge. Ranking high among the ideas proposed: a land bridge, wider sidewalks and narrower car lanes, bike lanes, better winter maintenance, greater attention to disabled users, traffic calming, making it feel more like a public space, and adding a cultural wall to celebrate the history and art of the Rondo community.

In the short term, FSI wants to tap community expertise and creativity for ideas on improving existing bridges. The Pelham Boulevard Bridge is already getting protected bike lanes, for instance, and a green common space will sprout on an empty lot near the Snelling Avenue Bridge, which right now feels more like a suburban interchange than a city street.

“The whole point of FSI is to transform streets of fear into streets of joy, in ways both large and small, affecting the physical environment and the emotional one,” says Christiansen.