Last week, Ilhan Omar made national headlines after her historic win over longtime Rep. Phyllis Kahn and fellow Somali-American Mohamud Noor in the DFL primary race for House District 60B. In the heavily Democratic district, the primary victory put the 33-year-old mother of three in position to become the first Somali-American elected to a state legislature anywhere in the United States.

A little more than week later, however, she found herself on the hot seat after conservative blog Power Line questioned whether Omar was married to two men: Ahmed Nur Said Elmi and Ahmed Hirsi, the father of her three children.

The Star Tribune then followed up, looking into Omar’s marital records, which revealed that Omar has been legally married to Elmi since 2009, and that she has never been legally married to Hirsi. Yet the paper also found that there was no evidence to support another of the charges raised in Power Line’s original report, that Elmi is Omar’s brother.

Given the murky nature of the story, here is an FAQ about the many questions the episode has raised: about Omar, immigration, marriage licenses and Somali-American culture in Minnesota:

So what’s the latest — what does Omar say?

Late Wednesday, Omar’s campaign issued a “response from Omar” statement on her website that sought to clear up the questions about her marital status and finally put the matter to rest:

In 2002, when I was 19 years old, Ahmed Hirsi (whose name before he received citizenship was Ahmed Aden), the father of my children and love of my life, and I, applied for a marriage license, but we never finalized the application and thus were never legally married. In 2008, we decided to end our relationship in our faith tradition after reaching an impasse in our life together.

Since 2011, I am happy to say that I have reconciled with Ahmed Hirsi, we have married in our faith tradition and are raising our family together. Like all families, we have had our ups and downs but we are proud to have come through it together.

Omar’s statement references getting married “in our faith tradition.” What exactly does that refer to?

We don’t know any details about Omar’s marriage, but there are common traditions in both Somali and Muslim culture when it comes to getting married. For one thing, respected elders and religious leaders traditionally play a key role in the process. In fact, when a man and woman decide to marry, the man sends his male relatives and elders to the woman’s family to ask for permission to marry her. The woman’s family then begins the vetting process of the man: Is he able to provide for the woman? Does he come from a good family? Does he have a clean criminal record? Is he a practicing Muslim who embraces his Somali culture and religion?

To find these answers, the family members seek out other Somalis in the area to learn about the man. And because Somalis make up such a tight-knit community, that process can expose anyone’s back-story quickly – often in a matter of hours. 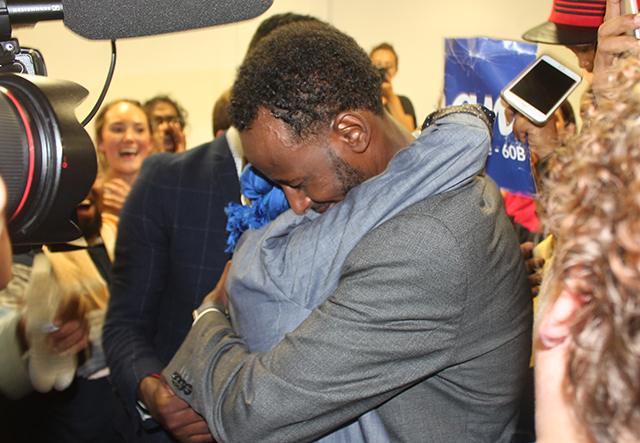 If the man survives the vetting process, the marrying partners privately agree upon an amount of merh — a payment, often in the form of money — the groom or his family will give to the bride.

The two families then organize the nikah — a marriage ceremony — where elderly men representing the groom ask other elders from the woman’s family for her hand. In Minnesota, such ceremonies often take place at community halls around the metro area, and may include as many as 200 witnesses to the ceremony, officiated by local imams.

At this point, the two are married according to Islamic custom. Many couples, however, decide to host Western-style wedding parties in closing to celebrate the months-long marriage process.

So what about a marriage license?

After such a long and expensive process, many young couples in the Somali-American community just don’t look beyond their traditional marriage.

Some aren’t aware that their marriage isn’t complete until they receive a signed marriage certificate from the state. For others, the traditional marriage consumes so much time and energy that they don’t have the desire, or see the need, to apply for a marriage license, which was never required in Somalia.

Other couples, who may want to legalize their marriage according to the state’s marriage laws, mistakenly assume that they have to go in front of a Christian minister to get a state license.

What about the allegation that Elmi was Omar’s brother? Where does that come from?

Well, we should reiterate that Omar has unequivocally stated that Ahmed Nur Said Elmi is not her brother, calling the allegation “absurd and ridiculous.”

The nature of the charge is easy to trace, however, and stems from the fact that immigration authorities give priority to U.S. citizens who request to bring in their noncitizen spouses to the United States. In practical terms, the immigration process for nonresidents can be cut by years if they are sponsored by citizen spouses.

Not surprisingly, there are examples of those who misuse the law. Instead of using the visa to bring their spouses, they fabricate marriage to get their siblings or other relatives living in foreign countries into the U.S.

That’s illegal, of course, and carries the potential for serious criminal consequences for both the sponsored immigrant and the petitioner. “Any individual who knowingly enters into a marriage for the purpose of evading any provision of the immigration laws shall be imprisoned for not more than five years, or fined not more than $250,000, or both,” writes Ilona Bray of Nola, a California-based company that specializes in immigration law and real estate.