With fall coming, school starting and the election less than 12 weeks away, the political battleground in Minnesota shifts for a couple weeks to the state fairgrounds, where each party has recruited volunteers and poured many dollars into booths and merchandise.

The goal: to sway the hearts and minds of savvy state voters. Or at least provide a few minutes away from the crowds and the rides — or to provide a safe space to come to terms with your unfortunate decision to go with the candied bacon donut slider spam bites on a stick.

In any case, as a public service, MinnPost visited every political booth at the state fair, using a highly rigorous process (not really) to rank them on a subjective but sensible scale. We looked at location, appearance and swag. But we also added a new category this year: Trumpiness. That is, how much of a presence did the GOP presidential candidate have at the various locations (for or against).

Location: Siberia. It’s in the grandstand, second floor, south wall. There are elevators, but the stairs are good for you.

Appearance: A little lackluster. There are a couple tables and signs in favor of $15 minimum wage and clean water. 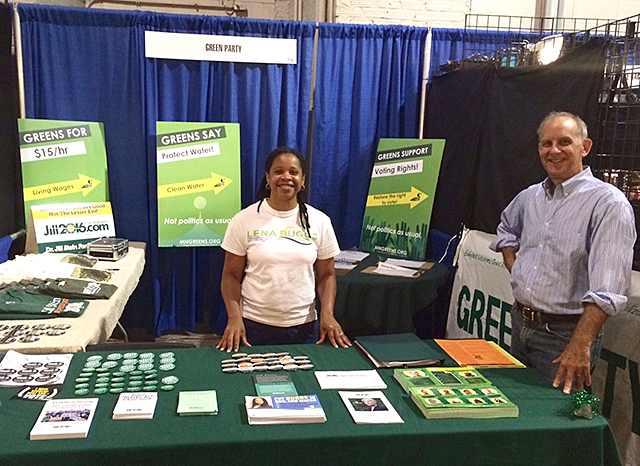 Trumpiness: No mention, but Lena Buggs, a Green Party candidate for the Ramsey County Soil and Water Conservation Board, said a lot of Bernie supporters had shown up. And, she said, for the first time in four years voters were showing a genuine interest in presidential candidate Jill Stein.

Location: On Underwood Street, so House of Cards fans will like it, and it’s around the corner from Tom Thumb doughnuts and in front of Wine Country.

Appearance: Pretty nice. There’s a brightly painted patio, with yellow chairs and red tables that’s inviting for weary fair-goers. Also, the signs helpfully remind you that the Constitution Party’s presidential candidate is Darrel Castle, whoever that is. 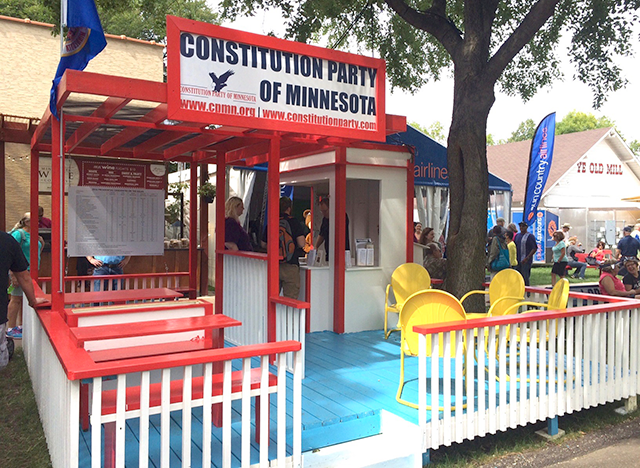 Swag: Only $3 for a pocket Constitution. Khizr Khan would like that.

Trumpiness: Trump is listed, along with the other candidates, on a chart that purports to list their positions on the issues.

Location: Pretty good. It’s on Nelson Street, near the DNR and KARE-TV. And it’s around the corner from the state Lottery booth, which seems appropriate, given that Libertarian presidential candidate Gary Johnson has about the same chance of becoming president as I do of winning the Powerball.

Appearance: Very yellow, though the t-shirts sporting a marijuana leaf and “Legalize it” will attract some to hear about the party’s philosophy. 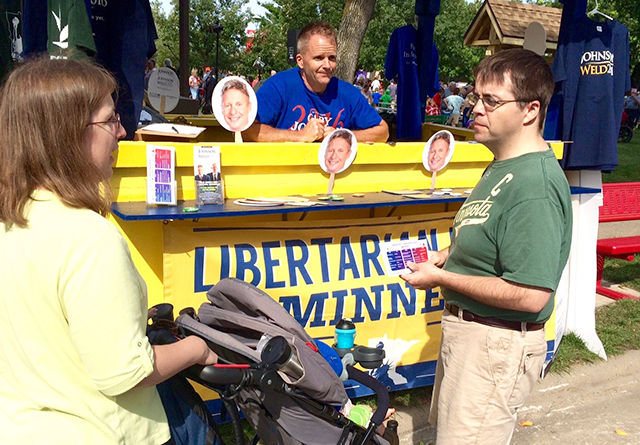 Swag: Pretty meager, though all reasonably priced: T-shirts and lawn signs go for $10, and stickers are $1.

Location: Primo. It’s on Dan Patch, right next to the Cheese Curds, where there’s always a long line of hungry people with nothing to look at but the Independence Party’s tent.

Appearance: Ok. There’s a life-size orange buffalo statue outside the tent, which is pretty sweet. And they’re for legalized pot, too, according to the sign. 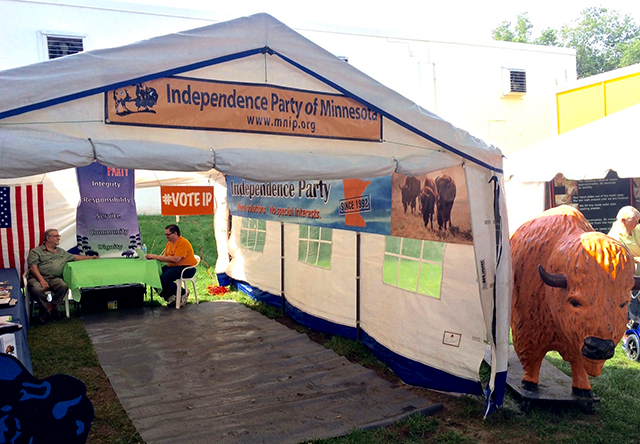 Trumpiness: One lady stopped in wearing a Trump t-shirt, they said.

Bonus points: The party announced Thursday that its presidential candidate, Evan McMullin, will be on the ballot in November. That’s state No. 7 for McMullin, the former CIA officer who entered the campaign as a Trump alternative. Local leaders say there’s a chance he’ll make it to the fair.

Location: Meh. It’s on the east end of the fairgrounds, where it’s always been, so the faithful have no problem finding it. But if you’re at the fair just for food, rides or the grandstand shows, you might not pass that way.

Appearance: Pictures of Sen. Paul Wellstone, Walter Mondale, Hubert Humphrey and the Obamas give a historic aura, and tables were bustling with volunteers helping folks apply for early voting. 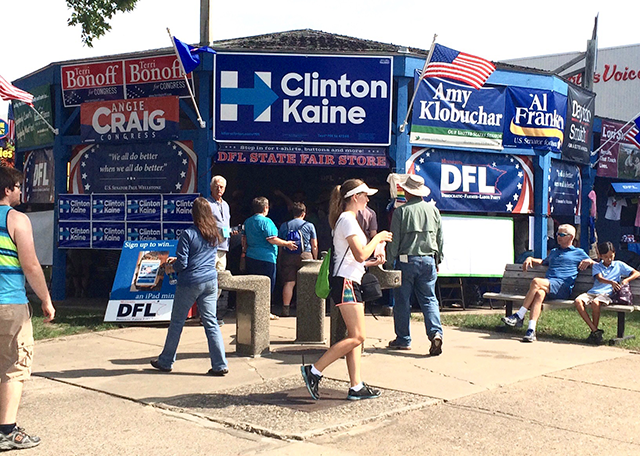 Swag: The booth is across from the Merchandise Mart, but there’s a veritable merchandise mart of stuff for sale here, too. Most prominent is Sen. Amy Klobuchar’s book, which goes for $20 (though it’s a signed copy, and Klobuchar herself was at the booth signing books Thursday). There are also buttons for $3. You can also get a helium balloon for free for kids, but only with parental approval (insert nanny-state joke here). And you can sign up to win a free iPad mini. 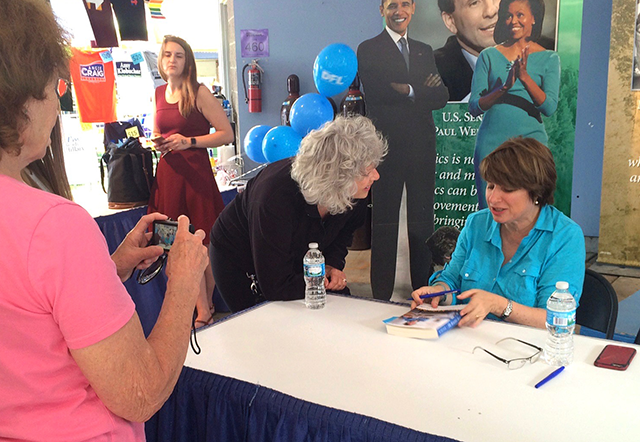 MinnPost photo by Joe Kimball
Sen. Amy Klobuchar signing copies of her book, “The Senator Next Door,” at the fair.

Trumpiness: Nada. During a long stretch inside I heard absolutely no mention of the Republican candidate. When asked if many visitors had asked about the Donald, a worker said: “Not many. Why would you waste your breath?”

Location: Excellent. It’s on Carnes between the WCCO Radio booth and Ye Olde Mill. So it’s basically in the midst of hot air and a cool water ride. And Sweet Martha’s Cookies are just a short chip away, so it smells nice.

Appearance: There’s a bunch of posters of candidates for Congress and local races and a quiet, landscaped patio in the rear, with tables. Yet there’s also a tacky Hillary-in-prison-stripes photo. (On the right side of the booth in the front, behind a speaker is another Hillary picture, showing her behind bars.) 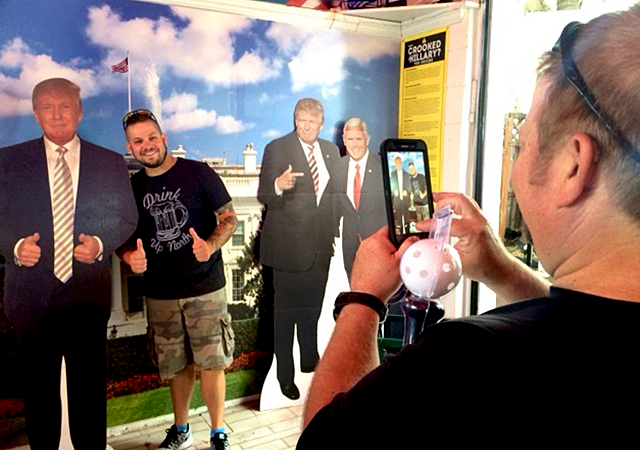 MinnPost photo by Joe Kimball
A fair-goer posing with a cutout of Donald Trump in the Republican Party of Minnesota booth.

Swag:  There are few free things, like brochures and little candy bars. Free water and wifi, too. A small dice/poker chip game was free, but there weren’t many available. T-shirts are $30; baby onesies, $25. And Donald Trump wigs for $30. None had sold as of midday Thursday.

Trumpiness: Off the charts. You might think that the state party might be a little coy about its ties to Trump, given his performance in the caucuses and the lack of enthusiasm some candidates in Minnesota have for his candidacy. But you’d be wrong. Trump-Pence signs line the booth, and there are life-size Trump cutouts. And a continuosly updated fair survey on whom should serve in a Trump cabinet shows that Dr. Ben Carson, Newt Gingrich and our own Michele Bachmann are high on fair-goers’ wish lists. 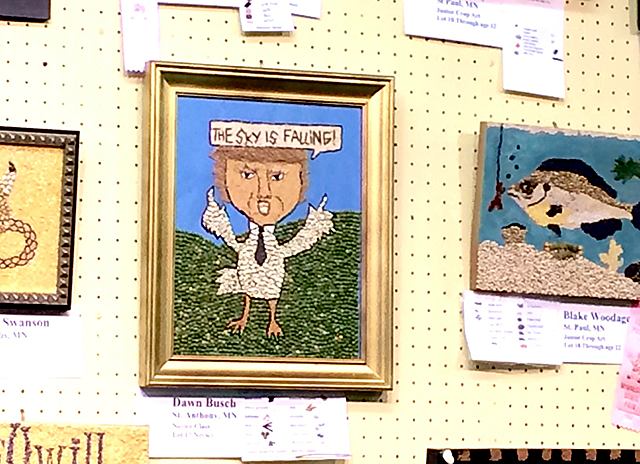 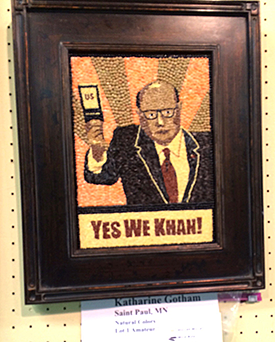 There are other booths in the political realm beside the parties, of course. Sens. Amy Klobuchar and Al Franken have their own buildings. And the state House and state Senate have adjoining space in the Education Building where residents can fill out surveys on current statewide issues, like a potential ban on pesticides that kill bees, or use of drones by law enforcement, or taxes for transit. There’s also a Hennepin County Sheriff booth on Cooper Street, which focuses on safe disposal of medications, but also includes big pictures of Sheriff Rich Stanek, who has long been thought to have gubernatorial aspirations.

Because these booths are for official business, and not overt campaigning, we didn’t include them in the rankings. But as special treat for those who’ve stayed with us to the end, here’s some crop art with a political tinge. You can find it in the Horticulture Building if you want to see it for yourself.