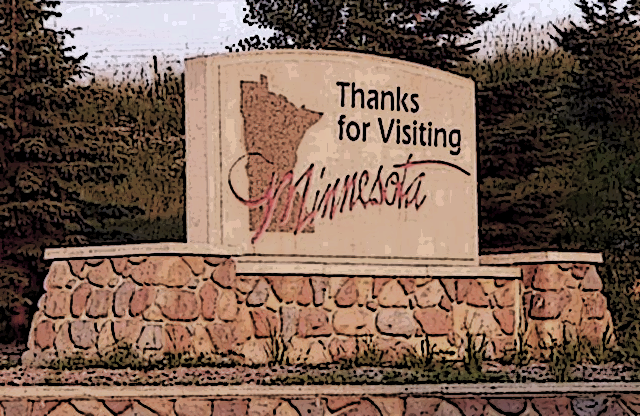 There’s a chart that comes up in State Demographer Susan Brower’s presentations about Minnesota’s population that always raises a lot of questions.

Can you spot what’s wrong with this picture?

The chart shows net migration to Minnesota — that is, people moving to the state minus people moving out of the state — for two groups. The first group, migrants to Minnesota from other countries, has shown steady gains since the 90s, with the number of immigrants even increasing since the turn of the century.

The story is far different for the second group, migrants from within the United States. In the ’90s, Minnesota was a net gainer of domestic migrants, meaning more people moved here from other states than moved away. Around 2002, that trend reversed, and since then, Minnesota has consistently sent more citizens to other states than it has attracted from them.

What explains the change?

Where Minnesotans are going

To get a clearer idea of what’s going on, it helps to know which states Minnesotans are moving to. Data from the Internal Revenue Service gives a granular picture of the number of households coming and going from Minnesota to other states each year, based on tax returns.

Much of Minnesota’s comings and goings have been from states with which it shares a border, namely Wisconsin, Iowa, North Dakota and South Dakota.

When you combine net migration from these states, Minnesota has pretty consistently gained migrants, overall.

But those gains were much higher in the ’90s and significantly reduced since 2002, and they were too small to offset Minnesota’s losses to other states in and out of the region.

When you break it down by state, there’s been net in-migration from neighboring Wisconsin and Iowa, most years, excepting a negative shift to Wisconsin for a few years in the early 2000s. Over time, net migration from Iowa — though still positive — slowed.

Net migration to Minnesota from bordering states, 1990-2015
While Minnesota was a net gainer of migrants from bordering states in the ’90s, by the turn of the century those gains were smaller, and, in the case of the Dakotas, actually dipped into negative numbers.
Iowa
North Dakota
South Dakota
Wisconsin
Source: Internal Revenue Service

Around that time, data show a net loss of households to North and South Dakota that coincides with the Bakken oil boom and major growth in South Dakota cities.

That makes sense: at the height of the oil boom, people were moving from all over the country for high-paying oil jobs, and North Dakota’s population growth led the nation.

“Migration was really picking up out there, and then in the most recent data I looked at on the Bakken, it was starting to decline,” said Jack DeWaard, assistant professor of sociology at the University of Minnesota. He and research assistant Jeronimo Lopez have beens studying data on inflows and outflows, using IRS records.

That decline in migration to North Dakota is consistent with a dropoff in the number of oil rigs parked near the Bakken, a dropoff in the price of oil and technology making it more efficient to drill for oil, which means companies require fewer jobs, he said.

While migration to Minnesota from its neighbors declined overall in the 2000s, it still stayed slightly positive. What really helped drive Minnesota’s net domestic migration into negative territory, data show, was an uptick in the number of Minnesotans moving to Sunbelt states, especially Texas, Florida and California.

In the case of California, Minnesota's net losses coincide with the start of the dot-com boom, around 1995. Between 1996 — the first year Minnesota saw a net loss of households to California — and 2015, a net 560 households have moved, on average, each year from Minnesota to California, IRS data show.

Florida has long been a big attraction for Minnesotans, but its appeal appears to have increased after 2002. Between 1990 and 2001, Florida saw a net gain of 540 households from Minnesota each year, on average. Each year between 2002 and 2015, it gained an average 990 Minnesota households, even considering a dip in migration during the recession.

The Lone Star State, meanwhile, has seen a clear uptick in net migration from Minnesota. From 1990 to 2001, Minnesota lost a net 50 households to Texas, on average, each year. From 2002 to 2015, that number was up to 700 net households each year, on average.

Though it’s definitely not in the Sunbelt, Washington state has also seen an increase in net household gains from Minnesota that increased over time, though to a lesser degree. Out-migration to other mountain west states, like Colorado and Oregon, has been more consistent over time.

What do these places have that Minnesota doesn’t?

Sunshine, for one. Though there’s disagreement over how much amenities matter, they’re difficult to measure, and people’s preferences for them vary, many researchers who study migration have found that amenities — warm weather, proximity to lakes, rivers and oceans, and other lifestyle factors play a role in people’s migration choices. And researchers say they help explain long-term migration patterns from the Snowbelt to the Sunbelt, which became a more palatable destination for many when air conditioning became widespread following World War II.

“Growth patterns have been very consistent with amenity-led migration to places endowed with high levels of natural amenities such as nice climates, pleasant landscapes, lakes/oceans and mountains, writes Mark Partridge, a professor of rural-urban policy at Ohio State University in a 2010 paper. “Amenity migration has led to a fundamental transformation of American geography.”

But sunshine’s not the only thing these states have going for them.

The states with the most net in-migration from Minnesotans also have in common hot economies — especially in recent years.

That’s not to say Minnesota’s is bad. Minnesota didn’t fare as poorly as the country as a whole during the recession, and it recovered faster.

Up to this point, we’ve been looking at data from the 2000s to see what changed to try to understand why net migration to Minnesota dropped relative to the 1990s. But there’s another possibility here: that the high net domestic migration of the ’90s was an aberration.

Good economics conditions may help explain why Minnesota was such a big importer of people from other states in the ‘90s. “In the ‘90s, the economy of Minnesota outpaced, outperformed on a number of different indicators, the rest of the U.S.’,” Brower said.

The good times couldn't last forever, though. “The recession of the early 2000s likely shifted relative opportunities in the U.S. and this would (have) halted migration patterns that Minnesota experienced in the 1990s,” Brower wrote in an email.

Despite Minnesota’s recession recovery, it didn’t see the level of post-recession growth some states did. A report by the Pew Charitable Trust’s Stateline that tracked job growth in states from the height of the recession to March 2015 found states that drew population from Minnesota saw some of the fastest post-recession employment growth: while Minnesota’s employment grew 8.5 percent, North Dakota’s grew 28.9 percent; Texas’ grew 15.1 percent; California: 13.2 percent; Florida: 12.6 percent, and Washington: 11.6 percent. Most of the people who leave Minnesota each year are young people leaving for college or in the early stages of their careers.

Gross domestic product for these states have grown at faster rates than Minnesota’s, too, according to data from the St. Louis Federal Reserve Bank.

Apparently, Minnesotans weren’t the only ones who noticed. The pattern of “Snowbelt” residents from the Northeast and Midwest moving to Sunbelt states is well established. It slowed down during the recession, but has picked up again in recent years, driven by lower costs of living, and booming job market growth.

All of these states, with the exception of California (which has a booming tech industry pulling people in and high housing prices pushing people out), have net positive domestic migration.

There could be other factors at play, but mostly, Minnesota’s migration patterns seem to be in line with the rest of the Midwest’s (besides the Dakotas with their economic booms) in recent years: it seems the net migration loss has to do with people leaving for sunny skies and good economies.

In fact, every Midwestern state besides North Dakota and South Dakota have been net domestic migration losers in recent years:

Note: due to rounding and other statistical factors, the sum of net international and domestic migration may not be equal to the total net migration shown in this chart.
Source: Minnesota Demographic Center

Why and where Minnesotans are going are questions researchers are keeping an eye on: after all, it’s not just for scorekeeping purposes that all of this matters.

Minnesota’s population growth is expected to slow in the coming decades as baby boomers age and the birth rate is projected to continue to be slow. In fact, forecasters believe the only way for Minnesota to have sufficient people for the jobs that are projected to exist is by importing them, both domestically and from abroad.

What these data can’t tell us now is how many Minnesotans move away and then boomerang back — or whether Millennials from Minnesota will come back once they have families of their own.

But if that’s to happen, the state may need to win them back.

“Minnesota is entering a new demographic era, where migration’s relative influence on our total population will rise. According to our projections, by the early 2040s, if our state is to experience any population growth at all, it will necessarily be from migration,” a 2015 report from the State Demographic Center says. “Minnesota leaders should work to stem and reverse domestic losses, redouble efforts to attract and integrate new residents, especially young adults, and seek to retain its current resident population.”

Minnesota used to attract more people from other states than it lost to them. Now it’s the opposite. What happened?