Room 237 in the Minnesota state Capitol is completely empty, save for a few pieces of furniture and an empty bookcase. Located just off the Senate floor, the suite is reserved for the chamber’s majority leader, but the guy who’s got that job, Paul Gazelka, hasn’t put anything in there yet, not even a stack of papers.

His regular office is just up the street, in a nearby building. But on a recent Monday, his schedule was so packed that he couldn’t get away from the Capitol. Instead, he held back-to-back meetings in the empty space. “We might need to do some decorating,” he laughed.

The office is a stark reminder that Gazelka is still adjusting to his new role, as are most people around the Capitol. Six months ago, nobody, not even Gazelka himself, expected he’d be the Senate’s new majority leader. But in the November election, Republicans picked up six seats to take control of the Senate. It was a surprising result, one made all the more surprising by the outcome of one race Republicans didn’t expect to lose. Sen. David Hann was defeated in his suburban Eden Prairie district, leaving the Senate’s Republican caucus without a leader.

“I didn’t see that we could be in the majority if he lost,” Gazelka said.

After the election, Gazelka quickly emerged as the consensus candidate to lead the Republican caucus. Now, a little more than a month into the 2017 legislative session, some senators say it’s already clear why. The soft-spoken insurance agent and father of five has already helped to broker two deals: one to align the state and federal tax code ahead of filing season; another to pass short-term health insurance relief for people who saw their premiums skyrocket last year.

Those deals came after months of fruitless negotiations on the health care issue between DFL Gov. Mark Dayton and Republican House Speaker Kurt Daudt — gridlock that had become commonplace in St. Paul, with two sessions in a row ending in a messy, last-minute flurry of legislation.

Gazelka, a conservative Christian, said things had gotten “too personal” in St. Paul. “I thought, ‘If I could apply the gold rule to politics and treat others the way you want to be treated, then that would make a difference.’”

Gazelka was born in St. Paul and lived there until he was 15, when his parents moved up north to Virginia, Minnesota. After graduating from Roosevelt High School, he spent a few years at the University of Minnesota in Duluth before finishing his bachelor’s degree in business at Oral Roberts University, a Christian liberal arts school in Tulsa, Oklahoma. After college, Gazelka moved back to Minnesota and started his career in insurance in Madison, Minnesota.

After working all over the state, Gazelka and his family eventually settled in the Nisswa area, where he got involved in politics as a volunteer. In 2004, he was surprised when the area’s GOP Rep. Dale Walz asked him to run in his place in the fall election. Gazelka didn’t know it at the time, but Walz was suffering from Parkinson’s disease.

As a businessman regularly dealing with Minnesota’s system of taxes and regulations, the idea of changing things was exciting, he said. He ran and won that year, but he also represented a swing district, and he lost his re-election campaign two years later.

He had also found his time in St. Paul to be personally challenging; he was commuting to the state Capitol with five children at home, and Gazelka opted to sit out politics for several years after he lost his House seat.

He returned to politics in 2010 after word leaked that local Republican Sen. Paul Koering, who was openly gay, had dinner with a gay adult film star. Gazelka was recruited to run by other Republicans in the area, and he stuck to a message of cutting taxes and business regulations. But the campaign got ugly at times, with outside spending groups sending out attack mailers against Koering mentioning the dinner date. Several times during the campaign, Gazelka denounced the negative ads, saying they were un-Christian and mean spirited.

He won the primary and the general election and went back to St. Paul to serve in a Republican majority in the Senate, the first time the party held power in that body in nearly 40 years. At the time, the state faced a $6 billion budget deficit, and the 2011 session ended with no agreement between Dayton and the Republican Legislature on how to resolve it. The state went into a 20-day government shutdown.

Then, the following year, Republicans put two constitutional amendments on the ballot: one to require a photo ID to vote and another to ban gay marriage. Gazelka was a co-sponsor of the marriage ban. It failed in the 2012 election and Republicans lost their legislative majorities, though Gazelka was re-elected.

As a member of the minority, Gazelka took a lead on tax and insurance issues in the Senate and built up a good relationship with Democrats in those committees. “Politically, he was a fairly conservative guy,” said Hann, who was the Senate Republican minority leader between 2013 and 2017. “People knew him for his measured demeanor. He wasn’t the guy who was going to get up and go on a rant.”

One of Gazelka’s first solo press conferences as Senate Majority leader this year wasn’t about social issues, health care or even the budget — it was about deadlines. Flanked by three large calendars printed on poster board, Gazelka announced the Senate had set final budget committee deadlines 52 days in advance of adjournment.

Most politicians try to stay away from wonky press conferences about the legislative process, but Gazelka saw it as a signal to both the governor and the public. This year, he said, they wanted to avoid the messy, last-minute dealings of sessions past. Plus, he admitted, “I hate being late.”

It’s all part of how Gazelka sees his new role — not as an individual legislator, but as representative of the entire state. That’s meant a narrower focus on the issues he thinks everyone can get behind: health care relief, transportation funding, tax cuts and passing a state budget on time. He doesn’t want to see a repeat of the state government shutdown, and he also wants to stay away from contentious social issues, resisting pressure from outside groups to take them on. 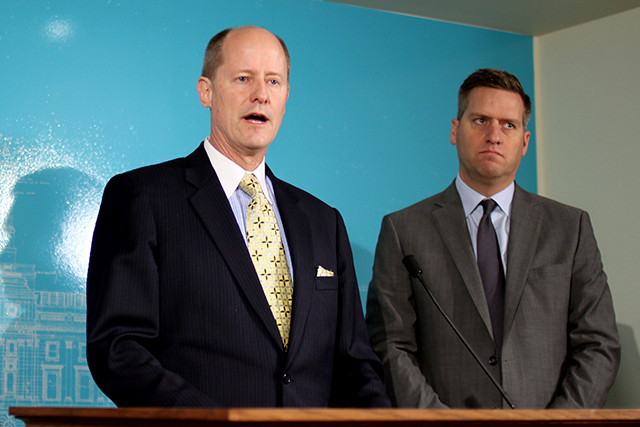 His faith still plays a big part in his role as majority leader, he said, but now it mostly manifests in how he treats other people, not in policy proposals. “There are times that I might get upset about something, or people say something in a certain way, but I can move beyond things easier because of my faith.”

His style is dramatically different from that of his predecessor, DFL Sen. Tom Bakk, who is known around the Capitol for his booming voice, his off-the-cuff speaking style and his penchant for old-school politics.

Gazelka doesn’t seek out the limelight and prefers to delegate big policy issues to individual legislators. “He really trusted me to be the leader on health care and asked me, ‘What do you think should be included in this and where do you think we need to end up?’” said Sen. Michelle Benson, R-Ham Lake, who authored the healthcare premium relief bill. “He let me go and do what I needed to do.”

Part of Gazelka’s style is dictated by political reality. The Senate is split 34-33, so he has just a one-vote majority. That’s means a lot of planning ahead, both to keep tabs on his members’ whereabouts for big votes, and also to keep everyone happy. “If it’s something only we agree on, all 34 have to be here and agree,” he said. “And because of that ‘and agree’ part, we have to work harder to build consensus ahead of time.”

And part of his approach is due to the limit of his ambitions. Gazelka doesn’t see himself rising climbing the political ladder. He likes his insurance practice and his home in Fairview Township. He enjoys going to coffee shops with his wife unrecognized, even if those moments are rarer these days.

“As majority leader, I don’t feel like I have anything to prove. I’m interested in the people around me developing and becoming leaders in their own right,” Gazelka said. “That’s not a threat to me. That’s something to me that I really enjoy.”

Correction: Due to an editing error, this story originally misstated the area Gazelka represents. Gazelka’s Senate District 9 includes Staples, Little Falls and much of the area around Gull Lake.