Twice a year, Minnesota Management and Budget officials put their heads together to make a state budget forecast, which projects how much money the state is going to have for the next couple years. It’s sort of like Groundhog Day (the holiday, not the movie), but for the state budget. Also, no one gets to hibernate if the picture isn’t pretty.

This is not just a bit of state trivia. The state budget forecast is an agreed-upon best guess of the state’s future budgetary reality, from which both parties work as they set taxing and spending policies every odd year. So how do they come up with the numbers?

How much money will come in

The budget forecast has two major components: revenues and expenditures. The revenue part, predicting how much money will come into state coffers, falls mainly to the office of State Economist Laura Kalambokidis.

On Tuesday, Kalambokidis projected state revenues of $45.7 billion for the 2018-19 biennium.

That prediction — how much money the state will take in — has a lot to do with macroeconomic factors; after all, these are tax dollars, and taxes bring in different amounts of money depending on how the overall economy is doing.

Revenue predicting starts with a forecast of the U.S. economy from independent consulting group IHS Markit, which is reviewed by state economic advisors.

“They give us hundreds of variables,” Kalambokidis said. “[There are] lots of detail on various types of consumer expenditures, a whole bunch of inflation rates, and their forecast comes with a narrative where they explain what their assumptions were in preparing the forecast.”

Some of the most important of those factors, including the country’s gross domestic product, consumer spending, income and business spending on equipment and structures have optimistic outlooks — even better than when the budget was last forecast in November.

That said, Kalambokidis pointed out there’s a lot of uncertainty in that forecast.

For one thing, the forecast assumes the new federal administration will bring lower tax rates and infrastructure spending, but, “with the change of administration, everyone’s observing and trying to forecast and anticipate what U.S. economic policies are going to be changed and what impact that is going to have on the economy,” she said.

Next comes the Minnesota forecast, which Kalambokidis and her colleagues prepare themselves, using Minnesota-specific data on wages, employment, consumer spending and other factors, keeping in mind the specific mix of industries in Minnesota and their expectations for what’s happening in them.

Those things are looking pretty good, too. Minnesota’s economy has continued to grow slowly, adding jobs and economic output over the last several years. In 2015, its gross state product grew 1.9 percent — 0.6 percentage points slower than the U.S. as a whole.

In part because Minnesota has a tight labor market — only about one person to fill every available open job — the number of hours Minnesotans work and their wages have seen an increase.

When Minnesotans make more money, so does the state, as income tax is one of the biggest sources of state revenue. Income tax revenue projections for the 2018-19 biennium are $24 billion, up $274 million from November’s prediction.

Wednesday’s forecast for sales tax, another major source of state revenue, is also projected to increase, thanks to optimism surrounding consumer spending. Put together, income and sales tax make up more than 75 percent of the state’s revenues.

Because of economic factors, state forecasters also expect the state’s corporate franchise tax revenue, based on companies’ profits, to increase, while statewide property taxes and other sources of revenues are expected to generate less revenue than projected in November.

Forecast state revenues for the 2018-19 biennium
Between the November budget forecast and the February one, delivered Tuesday, the state's revenue forecast increased by $321 million, driven by predictions of higher wages, consumer spending and corporate profits than previously thought.
Source: MMB

Revenue is just half the state’s financial picture. On the other side of the ledger is spending. That’s where Management and Budget Commissioner Myron Frans steps in.

Spending depends on use of services

How much money the state spends depends largely on how many people are using its programs. When more people use state programs, there’s more state spending, and when fewer people use them, there’s less.

Tuesday’s budget forecast projects $44.7 billion in government spending for the 2018-19 biennium, an increase of $156 million over the November forecast.

There’s a really important caveat here, though. The forecast only looks at the state’s current spending. Further, the forecast accounts for inflation on the revenue side, but is barred by law from doing so on the expenditure side, which some say makes surpluses look artificially large. 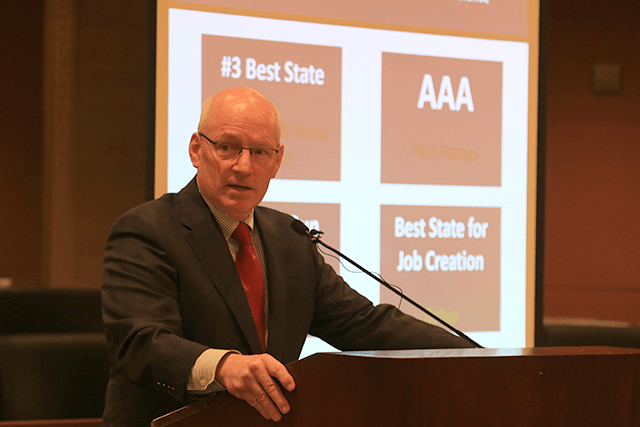 Education and health and human services are the two biggest general fund expenditure areas, and how much is spent in these areas varies based on how many kids are going to the state’s schools and how many people are using state health programs such as child protection services, services for seniors and services for people with a disability.

For now, MMB thinks that in 2018-19, more people will be using these programs than the department had projected in November, leading them to increase the spending forecasts by $95 million in education and $73 million in health and human services. Meanwhile, MMB predicts less use of state property tax aid and credits, leading to $15 million less in spending.

Forecast state expenditures for the 2018-19 biennium
Between the November budget forecast and the February one, delivered Tuesday, the spending forecast increased by $156 million, driven by projected increases in education and health and human services spending. Spending projections shown in millions.
Source: MMB

On both the revenue and spending sides, state officials work hard to provide lawmakers with an accurate picture of what to expect in the coming years. But what happens if the numbers are off?

They’re never exact to the dollar, Kalambokidis said. That’s why the forecast is done twice a year, to account for changes in outlook. Budget forecasters try to be as clear as possible about the risks inherent in the prediction process.

“Lots of things can happen between now and the end of this biennium,” Kalambokidis said. “We’re forecasting a biennium now that hasn’t even started. We have no information about what’s actually happening in fiscal year ‘18 or fiscal year ‘19.”

If the state turns up a budget shortfall in the current biennium, because either revenue or spending were not as predicted, MMB may authorize a reduction in the state’s reserve account to balance the budget. If there isn’t enough money in the reserve fund to do that, governors can approve an emergency spending reduction measure called “unallotment.” Three governors: Al Quie, Rudy Perpich and Tim Pawlenty, have used unallotment.

For example, Pawlenty used unallotment to cut $278 million in spending in 2003, when Minnesota faced a projected $356 million budget shortfall.

If there’s a budget surplus in the current biennium, by law some of the money has to be put into the budget reserve fund and to other uses, but any amount beyond what the state’s required to save is a positive balance.

Already, legislators have plans for some of the $1.65 billion surplus in the upcoming biennium, including $350 million in health insurance premium relief.

How accurate the forecast for the upcoming biennium turns out to be is largely dependent on factors that could change.

In addition to risk associated with a new presidential administration, economic conditions are prone to change, and right now the U.S. economy is in its fourth longest expansion in history. Economies are cyclical, and economic upswings things never last forever. The further you try to gaze into the future, the more likely the prediction is to be inaccurate.

“We will project a certain level of employment growth and income growth and consumer spending growth and corporate profits. Any of those things changing will change the revenue — up or down. There’s risk of both,” Kalambokidis told MinnPost.

The February budget forecast sets the terms for the debate at the Minnesota Legislature. Where do the numbers come from?