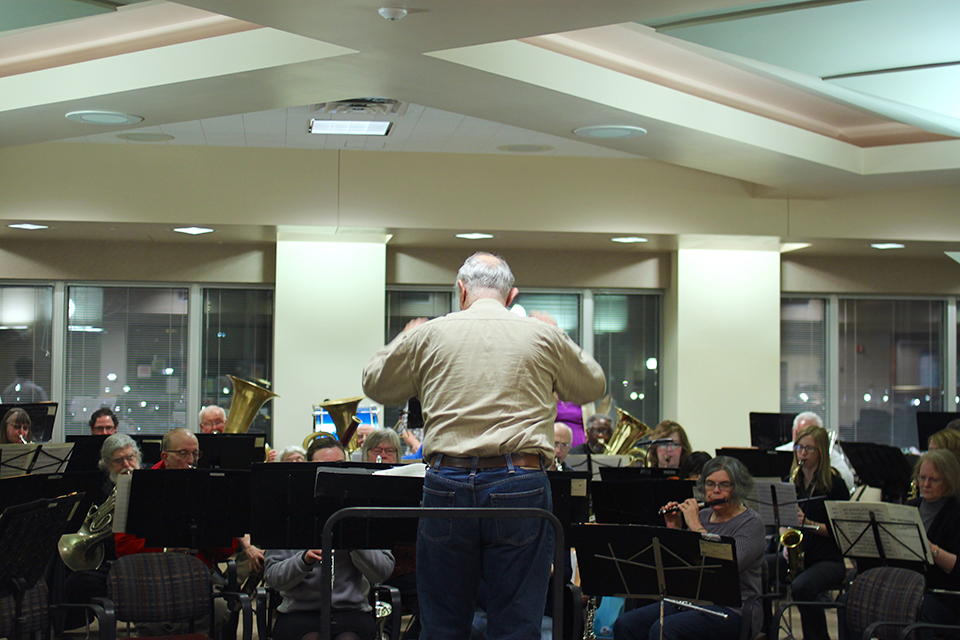 It was already dark by the time America's last official state band arrived.

It was just after 7 p.m. on a recent Wednesday when the group filed into the Minnesota Department of Transportation building's cafeteria, down the street from the state Capitol in St. Paul, pushing aside lunch tables and salt and pepper shakers to make way for their gear: sheet music, stands, flutes, timpanis, tubas and trumpets. In front of silverware and sugar packets, they set up a makeshift conductor's stand so they could practice. Tonight's material, Gustav Mahler’s 4th Symphony, was tricky. It had been giving the band some trouble.

“I know we’re futzing over these little notes,” associate band conductor Chuck Boody said after starting and stopping the piece several times. Suddenly a jingle started blasting from the phone in the breast pocket of Boody's shirt. 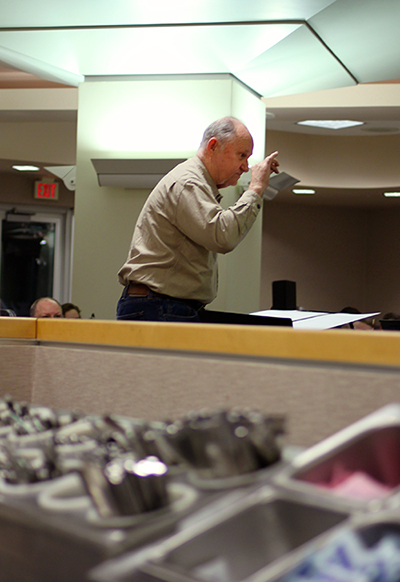 MinnPost photo by Briana Bierschbach
A cafeteria isn't the ideal setup for performing a symphony.

“Now that’s a good song!” one of the band members shouted.

A cafeteria isn't the ideal setup for performing a symphony, but when you're the Minnesota State Band, the only state band left in the nation, you take what you can get.

Indeed, at many points in its 120-year history, the band could’ve easily fallen apart and never gotten back together. Funding from the state has gone from scant to nonexistent. And even this practice space — the only space provided by the state — was in jeopardy. After more than forty years, the band was nearly kicked out a few years ago.

But the trickier problem seems to be a more fundamental one: few people even know Minnesota has a state band, let alone that it needs funding. 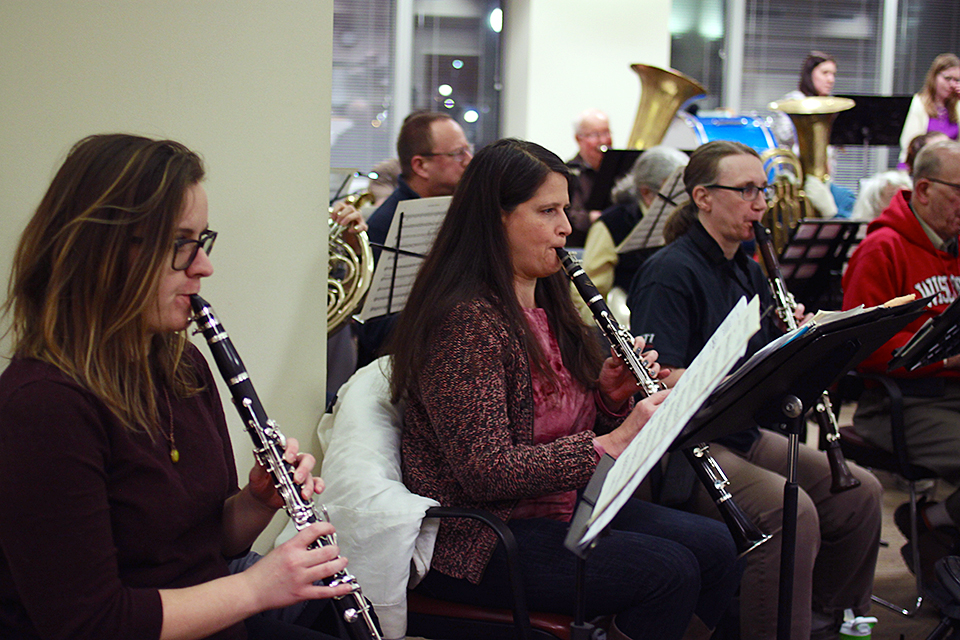 Hanging on for 120 years

In some ways it makes sense that the band practices in a state office building. It was started in 1898 by state employees who wanted to do something for fun.

Back then, plenty of other states had official bands; in fact, they were often an important part of official ceremonies and dedications. On June 26, 1898, the Minnesota State Band played its first two concerts ever at Como Park, and the crowds were huge. More than 5,000 people showed up for the two shows, which had marches, trumpet solos and dance music. The shows were so popular the band was booked for a week of concerts in the park that July and August.  Eventually, the Twin Cities’ rapid transit organization paid state band members to play because the company was making so much money off of fares from people traveling to see them. 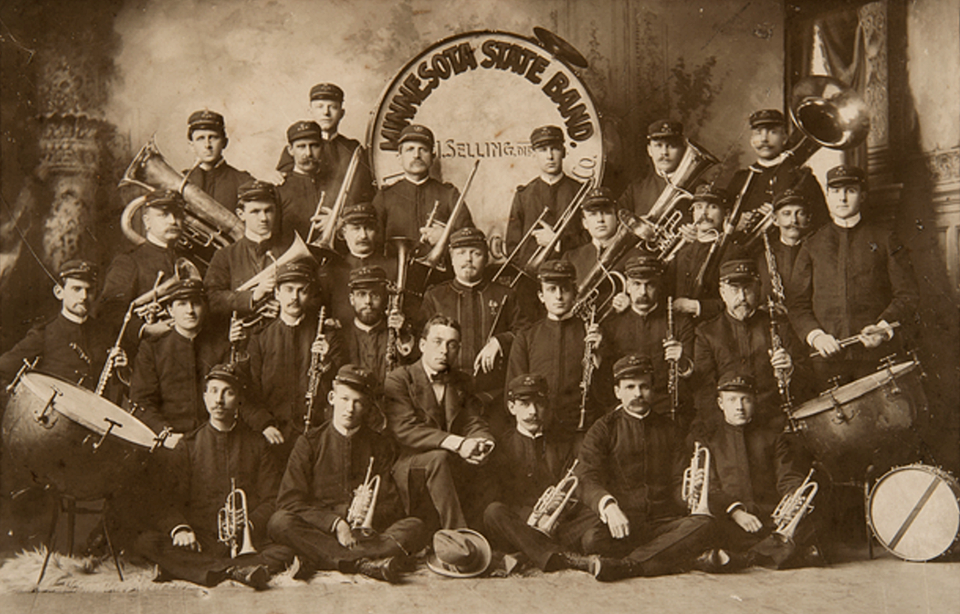 Courtesy of the Minnesota Historical Society
Minnesota State Band circa 1900.

That year the band also played for the opening game of the St. Paul Apostles baseball season, bicycle shows, and riverboat excursions. It gave concerts at the Grand Old Opera House and the State Republican Convention and welcomed home soldiers returning from the Spanish American War. In fact, the band was so good in its early years that bigger bands often poached its talent. Christan Selling, the band’s first conductor, eventually went on to play on Broadway.

Over the years, the band transformed into whatever the state needed. They played at the dedication of the Capitol in 1905, functioned as the regimental band of the state of Minnesota, and served as a feature player at rallies during World War II.

But as radio became a popular medium in the 20th Century, many states abandoned their official bands. “People didn’t need to get their music from concerts anymore,” Boody said. 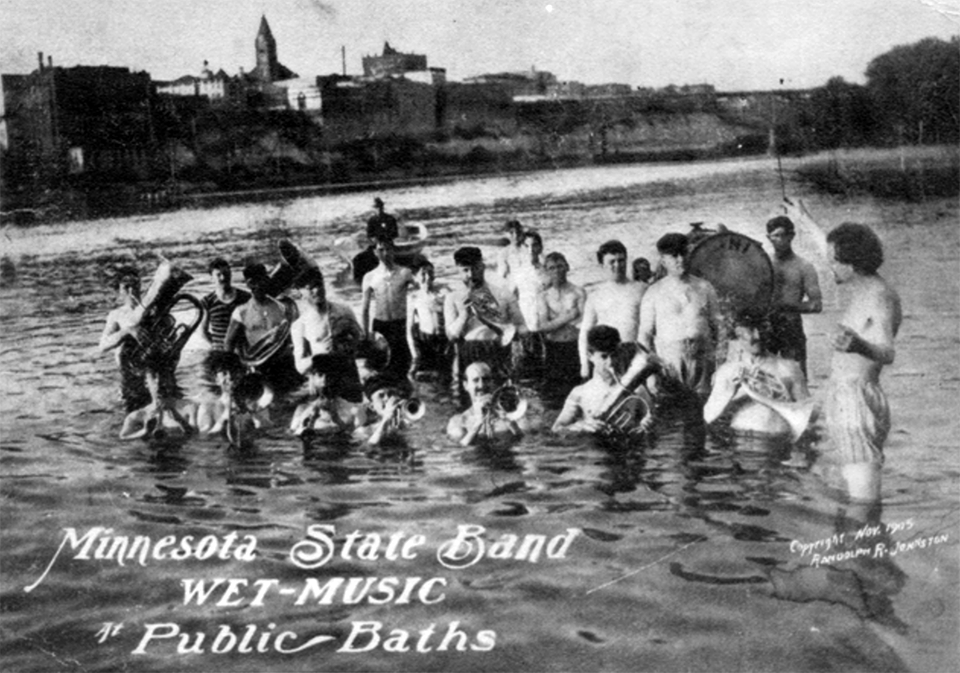 Courtesy of the Minnesota Historical Society
The Minnesota State Band in the river after a Sunday concert at Harriet Island in 1905.

And yet, the Minnesota State Band played on, thanks to sheer tenacity. For four decades, that persistence was personified by Joseph Komro, an accountant in the Department of Natural Resources who served as the band's unpaid conductor, public relations manager and fundraiser. In 1975, he used his connections at the DNR to get a practice space in the Department of Transportation’s cafeteria, even when other state resources were drying up for the band.

Over the years, Komro became an unofficial ambassador of the state in his role as state band conductor, taking the band on several trips to Europe, including France, Spain and England. He started many of those international concerts with “Hail Minnesota,” the state song.

Mary Murphy, a DFL state representative from Hermantown who was working for former Gov. Rudy Perpich in the 1980s, said she sold hundreds of candy bars to help the band get to Austria and Germany, and members still had to pay $500 out of pocket to go. She went along on the trip as Perpich’s representative.

“As we traveled and the Minnesota band played, [people from other countries] said that as long as people could communicate through music and beer, everything else could get settled,” she said.

But even during Komro’s leadership, the band ran into troubles.  His preference for crowd-pleasing music like marches and show tunes (he occasionally snuck the theme from  the movie E.T. into shows) caused a rift with some members of the band, who wanted to play more serious music. Half the band quit in 1994 and started a new band, with Komro trying to keep the rest of the members together.

In 2003, Gov. Tim Pawlenty proposed cutting $300 from the $2,000 the band was getting from the state at the time. It was the smallest cut back the governor proposed in his budget, but for the band, it was another symbolic blow. Komro went on a public relations campaign to get the funding restored, and a private company swooped in and cut them a check for $300.

“Of course Joe was a good musician, but more than anything, he was a great public relations manager,” Boody said. “That’s what the band needed.”

The band faced another big challenge when Komro suddenly died of cancer in 2005. “He directed the band for so many years and he was very organized and did an incredible amount of work to promote the band and finance the band,” said Keith Liuzzi, who spent 20 years as the music director at Southwest High School in Minneapolis and is now the state band conductor.

Then, in 2015, the commissioner of the Department of Transportation discovered that the band was playing in the cafeteria at night. Technically, they were never authorized to practice there, even though they’d been doing it for four decades, and there was discussion of having the band find their own space to rent.

Rep. Dean Urdahl, R-Grove City, is the Legislature's resident historian and helped secure the state band’s practice space. His solution: pass a state law that the Minnesota State Band can practice in the cafeteria once a week — at least until another legislator decides to take the provision out of law.

From state band to a community band

Things were picking up at state band practice, but there are always complications with a band of a certain size.

“Just be patient,” Boody said at one point during practice, as they switched to a different part of the song. “We’re waiting for our principal keyboard player to become a principal trumpet player.” 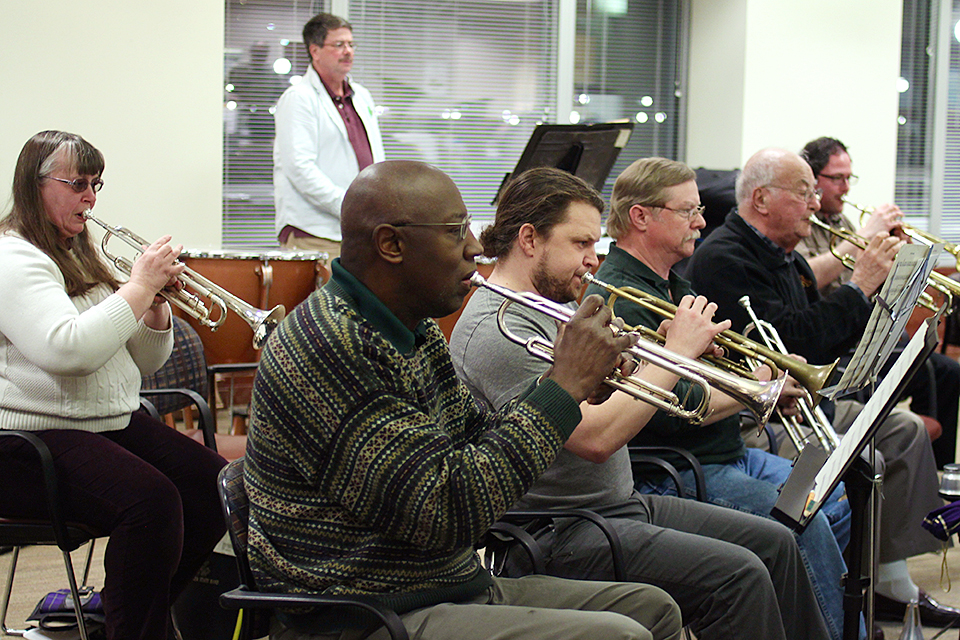 After some shuffling of seats, the band picked up the Mahler’s 4th Symphony again. They’re getting ready for two concerts, one on March 31 at St. Paul’s United Church of Christ, and another show on April 1 at the Litchfield Opera House. These days, the band is a nonprofit made up of about 45 members who not only volunteer to play, they pay a $50 membership fee. They bring their own instruments, save for a few larger percussion instruments owned by the band, which are falling apart.

The band hadn’t gotten direct funding from the state for years. Two years ago, the band asked for a $50,000 grant through the state’s Legacy funding bill. They ended up getting about $20,000, enough money to swing a few tours and travel 1,300 miles across Minnesota for 17 free concerts in high schools, veterans homes, parks and community centers.

“We managed three tours anyway, but we didn’t manage any new instruments,” Boody said. “It’s champagne on a beer budget.”

They piled onto Minnesota Coaches buses and stayed in cheap hotels as they did a three-day tour of the Iron Range. It felt similar to so many trips Liuzzi took at Southwest High School, he said, except it was all adults.

“The reality is it’s a community band,” said Liuzzi. “It has the name of the Minnesota State Band, and it did in its origin perform a lot of state functions. We are trying to get that tradition have it be more active again as part of the state.” 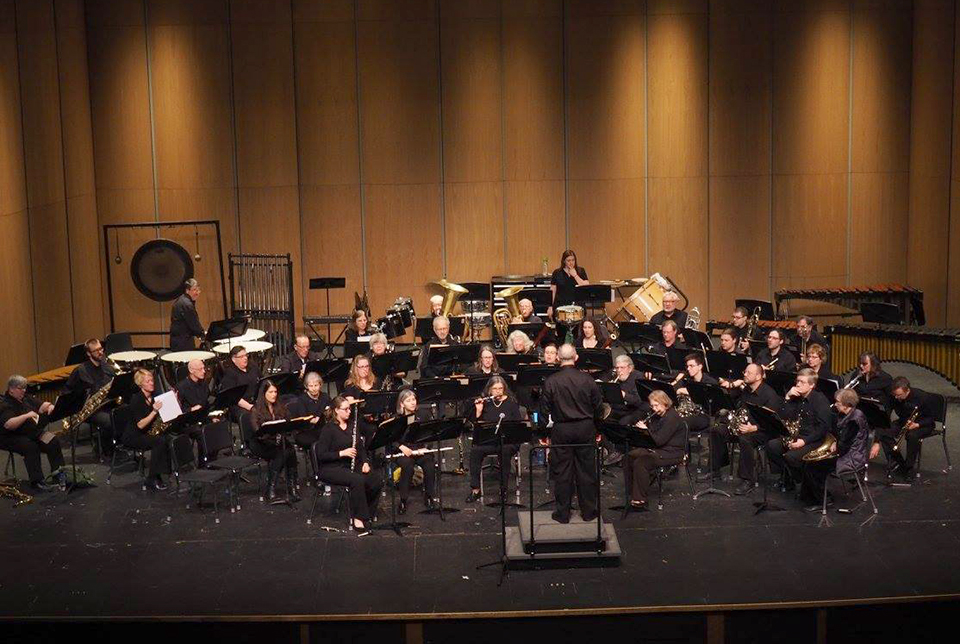 This year, they're asking state legislators for $25,000 in 2018 and another $25,000 in 2019 to continue traveling across Minnesota and help replace some of the more expensive, large percussion and brass instruments that aren’t as easily repaired. In a recent hearing of the House Legacy Funding Committee, members of both parties were supportive, including Rep. Mike Freiberg, DFL-Golden Valley, who has stepped in to play keyboard with the band when they need it.

But they’re competing against hundreds of other arts and conservation projects that apply for funding through the Legacy amendment each year, including more than two dozen community bands in the metro area alone. They hope the fact that the band is playing at the state Capitol’s reopening celebration in August after a three-year restoration project will help their cause. 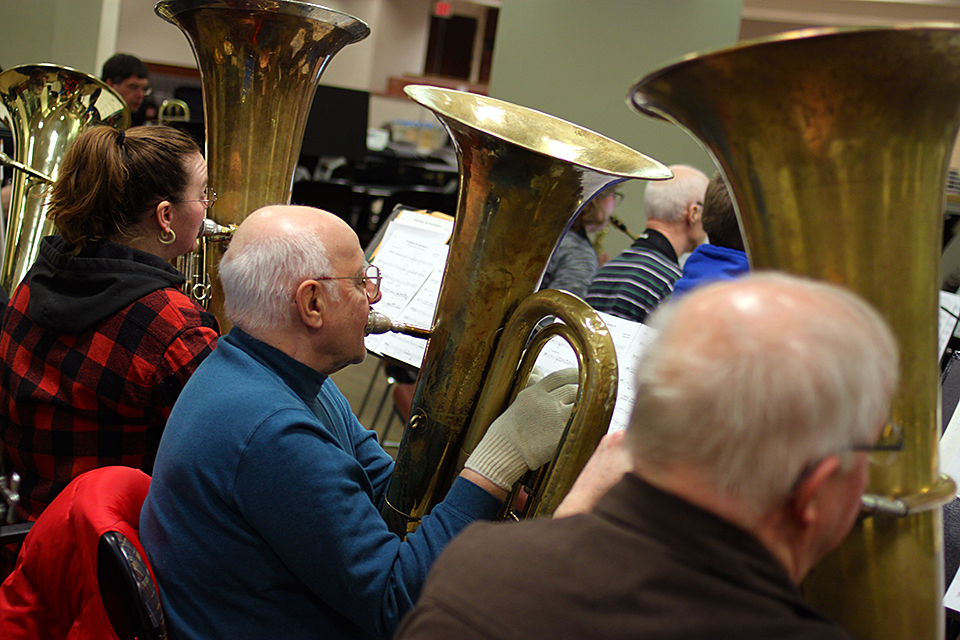 There’s also a separate bill introduced this session by Sen. Jim Abeler, R-Anoka, to spend another $5,000 out of the arts and cultural heritage fund to commission a song specifically for the re-opening celebration of the Capitol. But even though Minnesota has an official state band, the bill doesn’t direct them to write the song. Other bands could be commissioned to compose the piece.

Even so, Minnesota State Band members are hoping they get the chance, especially after they played at the dedication of the original Capitol over 100 years ago. Legislators are hoping for a triumphant march, something like the University of Minnesota’s “Rouser.”

Boody and others are starting to discuss how they think the song should sound and have asked a former Southwest High School student to write something.