In the end, the 2017 Minnesota legislative session went out with a whimper and a handshake.

After a weekend full of closed-door negotiations with little progress to report on the state’s two-year, $46 billion budget, DFL Gov. Mark Dayton and Republican leaders of the Minnesota Legislature reached across the negotiating table shortly before a midnight deadline to adjourn the session and shook hands, setting in motion a plan that wouldn’t finish their work on time — but that did result in a tentative agreement.

Under the terms of the deal, Dayton called lawmakers back for a special session starting at 12:01 a.m. on Tuesday, one minute after they adjourned the regular session, and legislators will now have until 7 a.m. on Wednesday to finalize the state budget. That includes passing billions of dollars of spending on everything from education and health and human services to a package of tax cuts and construction projects.

The details of that agreement were still unclear  — and negotiations ongoing — as lawmakers streamed out of the Capitol in the early morning hours of Tuesday, with plans to return in a few hours and work nonstop until the budget is passed.

Republican House Speaker Kurt Daudt acknowledged that the agreement could still  “potentially” unravel, but he didn’t expect that to happen. “It really represents true compromise,” he said. “We are getting some things we wanted, I know the governor is getting things he wanted. I think we’re happy with that.”

“Obviously we have very real differences so there’s been a lot of give and take,” Dayton said. “We’ve got the framework, and we’ve got some details to work out in several bills.”

There’s precedent for such an agreement. As recently as 2010, Gov. Tim Pawlenty called legislators back immediately after the session adjourned to finish work on a budget bill.

But there are still plenty of unanswered questions this year. By the time regular session adjourned, lawmakers had sent Dayton five budget bills to fund jobs programs, environment provisions, higher education, agriculture, public safety and the courts. But more than 70 percent of the state’s budget is tied up in budget bills that still need to be passed:  E-12 education, health and human services and state government spending.

As part of the tentative deal, lawmakers will spend $477 million more on education over the next two years, including $50 million more for a pre-kindergarten education program that is a priority for Dayton. The deal also includes a $300 million proposal for transportation over the next two years that doesn’t raise the gas tax or license tab fees. The fate of previously controversial provisions related to the governance of the Metropolitan Council and transit funding was still unclear Monday.

Top leaders also had few details to share about agreements around the state’s health and human services budget, the most complex part of the deal, and state government funding.

Two proposals that are not technically part of the state’s two-year budget — tax cuts and a bonding bill — were also part of the tentative deal. Lawmakers plan to work out the details of a $660 million tax cut bill and a $990 million bonding bill on Tuesday and Wednesday.

Negotiations also came down to the wire on a proposal to pre-empt local governments from setting their own wage and labor standards. Republicans said they still planned to send Dayton the proposal as a standalone bill, but Dayton said he wouldn’t sign it. “I appreciate that they’re sending it to me separate from budget bills,” Dayton said. “But I’ve made it clear that I will veto a bill that has pre-emption.”

The logistical challenges in getting everything passed by Wednesday morning also remain. Several of the bills, like health and human services, are so large that they take hours to simply process the paperwork.

All quiet on the last day of session

For much of Monday, it seemed like there wouldn’t be an agreement by the end of the night. The state Capitol was eerily quiet, despite the looming midnight deadline. Top leaders weren’t visible all day, and rank-and-file legislators shuffled in and out of floor sessions in the morning and early evening, debating smaller pieces of the state budget.

The jobs and economic development budget had moved out of committees after 1 a.m. and made it to the House and Senate floor for early Monday morning floor votes. Democrats protested a provision in the bill that bans local governments from banning plastic bag in grocery stores. The public safety budget bill, meanwhile, increased funding for the courts and removed a controversial provision that increased penalties for people who blocked freeways during protests.

But the bill still included language that would block drivers licenses for undocumented immigrants, earning plenty of criticism in floor debates. Current law doesn’t allow the state’s Department of Public Safety to issue driver’s licenses to undocumented immigrants, but Republicans pushed for language that specifically barred the practice. Dayton said he ultimately agreed to that provision as part of a compromise deal.

“This not only shuts the door but it puts a padlock on it,” Sen. Sandy Pappas, DFL-St. Paul, said. 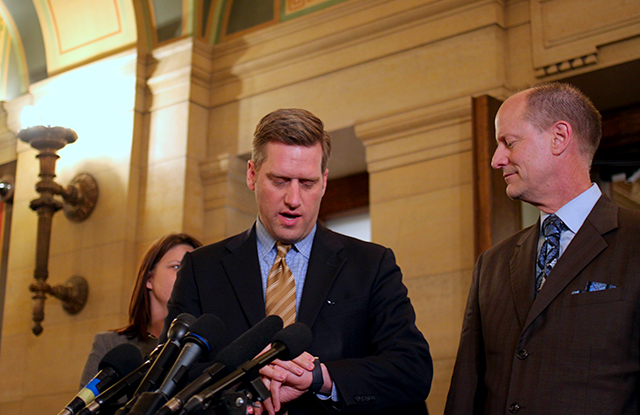 After those votes, legislators were in a holding pattern. The House and Senate took a break for dinner — a luxury not usually allowed to lawmakers on a looming deadline. Legislators enjoyed the Capitol loggia, a second-floor outdoor space that faced the Capitol’s front lawn that recently reopened to the public.

For one lawmaker, Carla Nelson, the final day of session was marked by grief. The three-term state senator from Rochester and chair of the E-12 education finance committee was negotiating the terms of the education budget when her father took ill. She returned home to be with him on several occasions, but returned back to St. Paul to continue work and take votes as needed. Senate Republicans have a one-vote, 34-33 majority in the chamber.

On Monday morning, she got the call that her father had passed away. “My father was very proud that I am a member of the Minnesota Legislature, and would want me to be here working for the people today,” Nelson said in a statement. “I’m so thankful for all of your prayers, support, and genuine expressions of love during this difficult time.”

It’s a messy ending to a session that got off to a productive start. Even with divided government, Republicans and Dayton managed to strike several major budget deals early in the year, including relief for people who saw their healthcare premiums skyrocket last year.

Republicans also passed a $524 million reinsurance proposal in March, which aims to help health insurance companies cover some of the costliest claims. The proposal passed the House and Senate along mostly party-line votes, and Dayton let the bill go into law without his signature. That month, the Legislature also lifted the state’s 159-year old ban on Sunday liquor sales.

In the week before session ended, Republicans and Democrats also broke an impasse on the federal Real ID Act, which requires enhanced security standards for driver’s licenses. The proposal passed and was signed by Dayton after years-of-back and forth, avoiding a deadline in January 2018 that would have restricted air travel for many Minnesotans.

But despite the often-tense negotiations to finalize the budget, Republicans and the governor had kind words for each other.

Daudt thanked the governor’s staff, and Dayton said he felt they negotiated in good faith. Gazelka said he came into session with a “rap” about Dayton that included “nothing good.” “I’ve found him to be very straight forward, a man of his word, a very tough negotiator and I would say a friend.” Gazelka said as he gaveled out session. “I think we decided we were all in.”