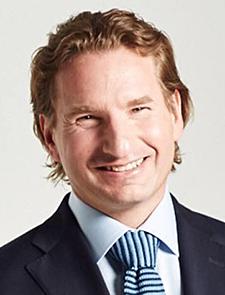 If you wanted to formulate in a lab an ideal candidate for political office, you could do worse than Dean Phillips.

The 48-year-old — who announced on Tuesday his bid for Minnesota’s 3rd Congressional District seat — is a scion of an established Minnesota business and philanthropic family, and is himself an Ivy League-educated entrepreneur who launched a successful ice cream brand. He’s affable, relatively polished, and cautious, likely to be a solid presence on the campaign trail.

Phillips is taking on a difficult task, however: defeating Rep. Erik Paulsen, the five-term incumbent GOP congressman. For years, Democrats have tried to take down Paulsen, arguing he’s too conservative for this moderate west metro district and unsuccessfully linking him to Donald Trump.

In election years both good and bad for Republicans, Paulsen — a prolific fundraiser — has persevered, barely breaking a sweat.

But the upcoming 2018 midterm elections will be the first referendum on Trump’s unified Republican government, and many observers believe it could be a historically bad one for the GOP.

In Phillips, Minnesota Democrats believe they’ve found the guy to take advantage of that opportunity, and unseat Paulsen once and for all. But despite his strengths, Phillips is a true political novice with no traditional political experience. Does he have what it takes to win over DFL activists and take down Paulsen?

Getting into the race

Phillips’ pedigree could be more of an asset in the 3rd District than perhaps anywhere else in the state. Encompassing the western suburbs of Minneapolis, the district is the most affluent in Minnesota, and it’s home to many of Minnesota’s most successful companies and their employees.

Phillips can speak the language of business, and he comes by it honestly: he headed his family’s company, Phillips Distilling Company, which is known for producing schnapps, vodka, and whiskey. In 2003, Phillips was part of a group that started a gelato company, Talenti, whose pricey frozen treats became wildly popular among high-end consumers.

Unilever, the world’s biggest ice cream company, acquired Talenti in 2014 for an undisclosed amount. (Talenti’s sales that year were reportedly $120 million.) Since then, Phillips has run Penny’s Coffee, a cafe in Minneapolis, where he’s touted paying employees a $15 minimum wage.

Phillips’ official announcement of his bid on Tuesday morning, which had been telegraphed for days, was low-key: he sent out a press release — headed by a slick new campaign logo — and launched a website. He becomes the third Democrat to enter the race to challenge Paulsen, joining Brian Santa Maria, a comedy writer, and Alicia Donahue, an activist.

Phillips is the most high-profile and well-resourced Democrat to jump in, however. In an interview with MinnPost, Phillips discussed why it is that he is running for this seat, and why he’s running for it now.

“It wasn’t something I had imagined doing until the recent election,” Phillips said. “It concerned me, and over the last number of months and weeks that concern has only grown, and when Erik Paulsen took the health care vote, that really ended my time on the bench and on the sidelines, and I decided I needed to stand up and participate.”

Phillips said that CD3 voters are smart and recognize that Paulsen is not Trump. “However, recent weeks and months have made it clear he votes along with Donald Trump,” he said. “That’s a truth, not an opinion.”

He added that people send representatives who will act as checks and balances on power to Washington in times of need — “it’s certainly a time of need,” he quickly added.

‘I’m not a typical Democrat’

But in what ways would Phillips check — or not check — the Republicans who are in power in Washington?

Right now, the Democratic Party base is fired up, and it’s desperate for progressive warriors to do battle with Trump and the congressional GOP. Grassroots backlash has been particularly severe in CD3, with activists putting pressure on Paulsen for his vote on the GOP health care bill.

In Phillips, though Democrats aren’t getting a firebreather, but a pro-business centrist. Phillips bristles at political labels, and he declined to talk about where he falls on the spectrum of the Democratic Party. He did say, however, “I’m fiscally responsible, and I’m socially inclusive, and I’m independent… I’m not a typical Democrat.”

Phillips said he has voted for Republicans in the past; two politicians he said he admires are Sen. Amy Klobuchar and former Rep. Jim Ramstad, the Republican who held the 3rd district seat for two decades, and is Paulsen’s former boss. 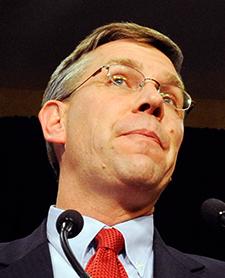 Without a voting record or much of a public record, it’s difficult to discern exactly where Phillips stands on certain issues.

He declined to elaborate in detail some of his policy positions: “At this stage, day one of my candidacy, I feel so strongly about listening and better understanding rather than throwing stones,” he said. “I certainly do have some ideas and opinions, and I’ll wait to share those until I do a better job understanding how [CD3 voters] feel.”

Phillips did share his thoughts on some issues, however. On health care, the issue that sparked his run for office, he called the GOP replacement of Obamacare, the American Health Care Act, “abhorrent,” and stressed that Congress should focus on reforming Obamacare, not dismantling it.

He declined to say whether he was in favor of single-payer health care, now a mainstream idea within the Democratic Party. “Right now, health care is not a constitutional right,” Phillips said. “But with that said, I believe it to be a moral right.”

On taxes, Phillips said he believes “everyone pays plenty in taxes” and that he wants to provide value on those taxes. “I do not think our tax dollars are always used efficiently and effectively.”

On corporate tax rates, Phillips declined to comment on a specific plan — such as Trump’s proposal to reduce the statutory corporate rates to 15 percent down from 35 percent — but added that, as an entrepreneur, he has observed that “jobs are created when demand increases… Jobs are not created when taxes are reduced.”

Without an established political record, Phillips has the luxury of formulating more fleshed-out positions on policy as he goes along.

Some Democrats see that as an advantage, recalling how Paulsen and his allies used the legislative record of his 2016 opponent, former state Sen. Terri Bonoff, as an effective weapon against her.

One DFLer called Phillips a “clean slate,” and not in a bad way. That clean slate can be a double-edged sword, however: as a relative unknown, if Phillips does not define himself first, his well-funded GOP rivals will.

Those in Minnesota’s 8th District might remember another candidate — wealthy, political outsider, long hair — who got defined early, and negatively, by his opponent, and had a hard time recovering from that.

Paulsen’s allies in the National Republican Congressional Committee have wasted no time, publicly attacking Phillips hours after his announcement with claims he is a flip-flopper, based on a lack of clarity from Phillips as to whether he’d self-fund his congressional bid. (Ultimately, Phillips said he will not accept contributions from PACs or lobbyists, but will make up for that stream of cash with his own money if necessary.)

Phillips is well-connected in corporate and donor circles. In the past, he has hardly been reluctant to pull out his checkbook to support political causes and candidates for office: federal records show over $320,000 in political contributions in Phillips’ name over the last 15 years.

He has donated to DFL party organizations and politicians, including Sens. Al Franken and Amy Klobuchar, Rep. Tim Walz, and a group of failed challengers for seats in various Minnesota congressional districts.

Phillips was a top bundler for Barack Obama in 2012, and donated to Hillary Clinton’s campaigns in 2008 and 2016. He stepped up his giving recently, donating to a slate of Democratic challengers for U.S. Senate seats in 2016, and giving over $30,000 to the Democrats’ Senate campaign arm that cycle.

‘A lot of listening’

Broadly, Democratic insiders feel like Phillips could be their strongest challenger to Paulsen yet. But that was said about Bonoff last year, too, and there exists a wariness over falling into a similar trap.

Like Bonoff, Phillips has a moderate profile, but his early jump into the race could open up room for a candidate to run to his left — indeed, there’s talk that someone might do just that. A challenge for Phillips will be firing up progressive activists without alienating the moderate CD3 electorate, should he advance to the general election.

Democrats like how the electoral environment looks for them now, but the general election — and a potential primary — are over a year away. For now, Phillips plans to spend the upcoming weeks introducing himself to CD3 voters.

“I understand and recognize and appreciate the anger that exists on both ends of the spectrum, disenfranchisement, anger about the direction of the country,” he says. “I plan to do a lot of listening and a lot of meeting.”

He is confident that approach — combined with the concerns springing from the Trump administration — will encourage a big showing on election day.

“One great blessing of this presidency,” he says, “is that people are paying attention, standing up, and engaging and are caring in a way they have not done in the past… People are going to get out and vote this time.”

Dean Phillips wants to lead the Democratic challenge to Erik Paulsen. But what kind of Democrat is he?