Mette Nielsen had been interested in the concept for a while, but the death of a beloved catalpa tree provided the impetus, and the space, to do something not many people in Minneapolis have tried yet: With the help of her architecturally trained son, the Seward resident designed and built a second house behind her century-old cottage: an “accessory dwelling unit,” according to city ordinance.

“I always thought it would be fun to have a small house but I never wanted to move,” Nielsen said.

While visiting her son in Boston and Seattle, she would see ADUs in those cities. So when she heard that the city was considering an ordinance to make them legal in Minneapolis, she began attending the public meetings to both listen and give suggestions. The final impetus came when she had to take down a massive tree that had provided one of the reasons she purchased the house in the first place.

“It was one of those moments when it was, okay, time to move on,” she said. “I was ready for change.”

Nielsen calls the 889-square-foot house “my retirement home.” But she’s not quite ready to move in yet. She will offer it as a short-term rental and use the large kitchen for cooking gatherings and dinners. A commercial photographer specializing in food and beverages, Nielsen recently collaborated with local writer Beth Dooley on the book, “Savory Sweet.”

That makes the unit’s kitchen an important place, and it includes full-size appliances, a gas cooktop and a large counter space.

The design is mid-century modern meets farmhouse with some Scandinavian sensibilities. (Denmark is Nielsen’s native country). With its concrete floors and open layout, she calls it her loft on the ground, and said 97 percent of the finished product were in the first drawings. “He knows me very well,” she said of her designer son, Alexander Watchman. “He said it’s a no-brainer. I know what you like.”

Watchman grew up in the main house (Ward 2 Council Member Cam Gordon was one of his Montessori teachers) and graduated from the University of Minnesota before earning a graduate degree from the Harvard University School of Design. Now a designer with the Seattle office of a large architecture firm, he agreed that knowing his client so well helped with the design choices.

“It has a larger kitchen than most big houses,” he said. “It takes up a bigger percentage of the building than most kitchens do. But that’s because she basically lives in the kitchen. It’s going to be more of a living room than the actual living room.” 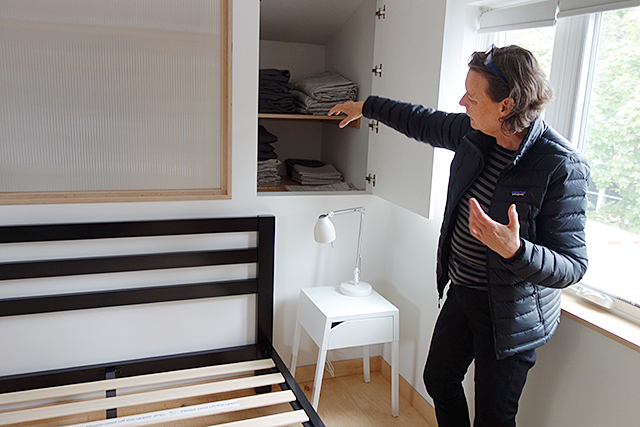 While in graduate school, Watchman said he worked in the school woodshop and took special interest in some of the trim and finish details, especially a vertical screen made from furniture grade plywood called “ApplePly” that separates the stairway from the living room.

But while Watchman made the drawings for what is his first building, he gives a lot of credit to the contractor, who made many of the decisions on questions that came up during construction. “I can’t take 100 percent credit for it because, like most owner-architect-contractor relationships, I was just drawing this stuff.”

The contractor “did such a great job making decisions about finishes and alignments and things that arise only when you start building something,” he said.

Nielsen said she and her son talked to a half-dozen or so builders — both large and small — but had trouble finding the right fit. “It never really seemed like anybody understood the project,” Nielsen said.

Watchman said the first bids were much too high, perhaps because the builders had to make it worth their time.  Finally, through a referral from an architect, she found Greg Arntz Construction, who took on the project.

One remedy to rising housing costs

Minneapolis’ ADU ordinance was the second one authored by first-term Council Member Lisa Bender (the first allowed backyard beekeeping). Introduced in June of 2014, it was adopted by the council in December of 2014. 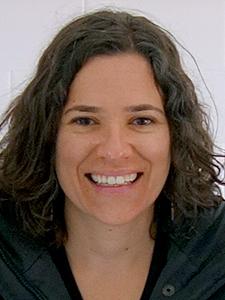 “When you look at cities around the country that are facing rising housing costs, like we are, there is a list of things they have done to build needed housing,” Bender said. “Accessory dwelling units are on that list.” While they were allowed in a part of the North Phillips neighborhood, they were illegal elsewhere. (St. Paul allows ADUs in some neighborhoods along the Green Line.)

“The nice thing about accessory dwelling units is they use existing buildings, so it’s actually a preservation strategy,” Bender said. “And it adds units in neighborhoods where it might be harder to add units with bigger buildings because you can put them in single-family residential zoning.”

Legalizing them also gave the city opportunity to oversee rental units that existed before the ordinance but were not being inspected.

At the time the ordinance was being considered, much of the debate was around size, parking and whether an owner have to live in one of the buildings. The conversation around size came at the same time that there were protests over the wave of teardowns in the southwest part of city, where large houses often replaced small ones.

ADUs can be located inside a house, attached to a house or detached from one. But if they are detached, as is Nielsen’s, an ADU cannot be larger than the main house or 1,300 square feet — whichever is smaller. In Nielsen’s case, that meant her ADU couldn’t be more than 900 square feet. And had it contained a garage for cars, that space would have counted against the total.

The unit also cannot be taller than the main house. The two units must be tied together with shared water, sewer and gas service. And the owner must own both houses and cannot rent out more than one. 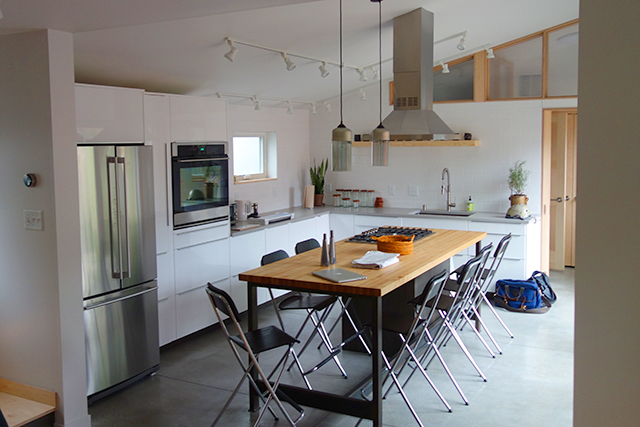 Since the ordinance took effect 30 months ago, the city has approved 63 building permits. Of those, 20 went to homeowners who had already had off-the-books ADUs in their homes and wanted to come under the new law. Ten of the 63 are attached units, with four of those being part of new single-family dwellings; 18 are detached, with two included as part of new construction; 35 are located inside a house, with one of those being part of new construction.

Watchman said he isn’t surprised at the relatively low numbers of permits. “It’s a weird little thing,” he said of ADUs. “People aren’t used to the idea that there’s a whole ‘nother house in my backyard. I think there’s going to be a slow trickle of them.”

Watchman said he thinks it might be difficult for architects to make a living designing ADUs alone. None of the buildings are very large. And while the price might range from $150,000 to well over $200,000 depending on finishes and features, that’s not enough to generate very large fees.

“It falls into a category that hasn’t been taken on by a lot of architects,” Watchman said. “It’s not enticing for bigger firms.”

Within two weeks of the council’s adoption of the ordinance, Minneapolis architect Christopher Strom announced the formation of a subsidiary of his main residential architecture practice that he calls Second Suite. Since then, he’s talked to a lot of people who are interested in ADUs — at least until they understand what’s involved.

But Strom has designed projects that have been built. One is a 340-square-foot unit located over a garage near Lake Harriet. And he said construction is starting on another unit in Longfellow. He’s also done a unit located inside a house. 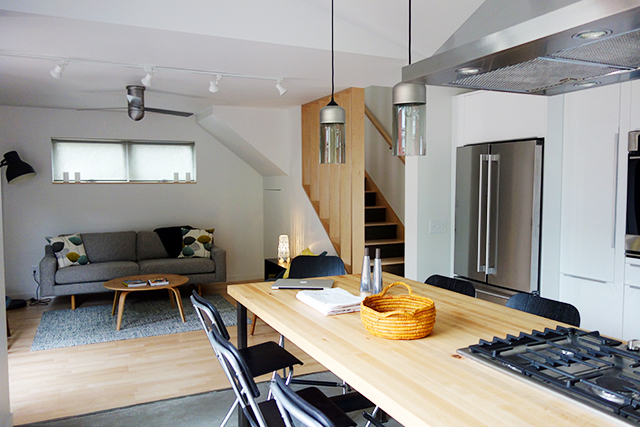 MinnPost photo by Peter Callaghan
Mette Nielsen will offer the ADU as a short-term rental and use the large kitchen for cooking gatherings and dinners.

“A lot of people don’t know about it,” Strom said of the ADU ordinance. “I have a lot of friends and neighbors who still don’t know you can do this. I think it’s a matter of time before there’s enough of them where people understand it’s actually an option.”

Strom said the demographic of clients is different than the work he does on custom homes. Some potential clients are downsizing, some want to rent it out on short-term rental services, sometimes it’s people with an aging relative.”

As for builders, Strom said he relies on contractors with whom he has a relationship via other jobs.“Generally speaking, you can find somebody who will embrace the challenge of building something small and compact,” he said. “You have to find someone who’s gung-ho about doing it. It might be out of the comfort of some builders.”

Nielsen said she that after spending so much time on the project, she could write the book on how to build an accessory dwelling unit in Minneapolis. And she just might. “My experience has been great,” Nielsen said. “I’d certainly encourage other people to do it.”

Inside one of Minneapolis’ first, and coolest, accessory dwelling units